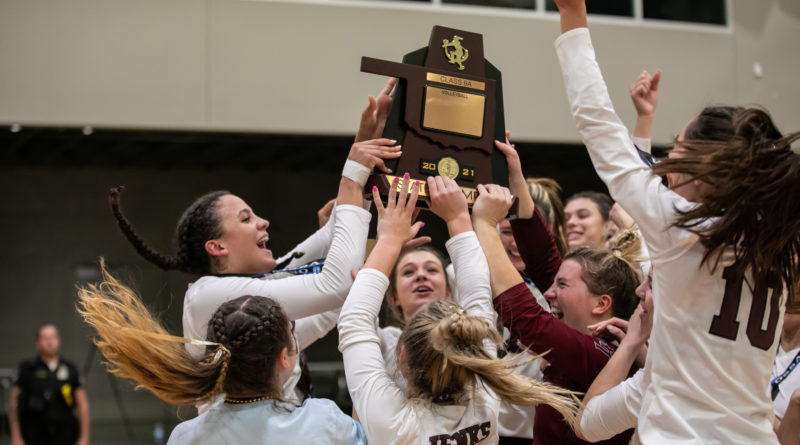 VERDIGRIS, Okla. — Monday night, the Jenks volleyball team rallied from a 2-1 deficit to stun defending champion Bishop Kelley in the 6A semifinals.

One night later, a similar scenario unfolded in the 6A title match, as the Trojans found themselves down 2-1 to Norman North, needing to win the last two sets to pull off another improbable win.

Her players were equally confident they were going to find a way to extend the match to five.

“I was like, ‘We need a win; we’re winning this right now,'” sophomore outside hitter Maren Johnson said. “That’s what I just kept thinking.

“I think we were just bringing a lot of energy and we were like trying to keep each other motivated, so that we can just keep going and win. … (In the fifth set) we were really hyped up and we were like, ‘We need to win this set right now.’ And now we’re state champions.”

Jenks senior middle blocker Mikiah Perdue set the tone for that fifth set by delivering back-to-back kills for the first two points, a lead the Trojans held the rest of the way.

“I knew that regardless of what happened in the end or who won, I was going to walk out of the gym knowing that I did everything I could, I gave 100 percent and regardless of the score, I tried my best.”

Everything continued to go the Trojans’ way. A serve from sophomore Audrey Wright deflected off a North player’s back for an ace, making it 7-2. Then a stuff and a kill from Johnson on consecutive plays gave Jenks a 9-3 lead.

“Maren Johnson, that was an excellent state tournament; that was probably the best I have ever seen that kid play, just moving the ball around, hitting shots, finding the holes,” Smith said.

“It’s a whole team effort to get where we needed. We played the best Jenks volleyball (Tuesday) that I’ve ever seen, with a lot of heart and a lot of effort. Just incredible.”

Jenks continued to roll, as consecutive kills from sophomore Kynli Kirkendoll and junior Noelle Prideaux made it 13-4, Trojans.

Moments later, a side out on a Norman North kill attempt enabled the Trojans to mob one another on the court, shortly followed by their vocal contingent of fellow students.

It was the first state volleyball title for Jenks since 2014, and the Trojans’ fifth in program history.

“You can do it if you step up and play your best game, and we just had to have competitive responses after every single point and we just had to know that we can win regardless of who’s across the net or who were playing; if we played our best volleyball, we could win.”

With the score tied at 6-all in the fourth set, Jenks scored eight of the next nine points. That was capped by a lengthy rally from both sides, which ended when Kirkendoll delivered an unreturnable kill.

An ace from Johnson on set point forced the deciding fifth set.

North tied the match at 1-all; then in the second set, the Timberwolves broke a 15-all score with four straight points. Back-to-back aces from senior Heavenn Fults gave them a 23-17 advantage, and after Jenks rallied with a 4-0 run, North was able to get the last two points go to up, 2-1.

That put the Timberwolves in position to win the first volleyball title in school history. However, Jenks had other ideas, and when the dust settled, it was the Trojans who once again found a way to win it.

“Absolutely unreal, like I’m still not sure that it actually happened,” Perdue said. “I’m happy beyond words, but I’m still trying to figure out if this is actually happening or if it’s part of a dream because it’s just so amazing and it makes me so happy.”