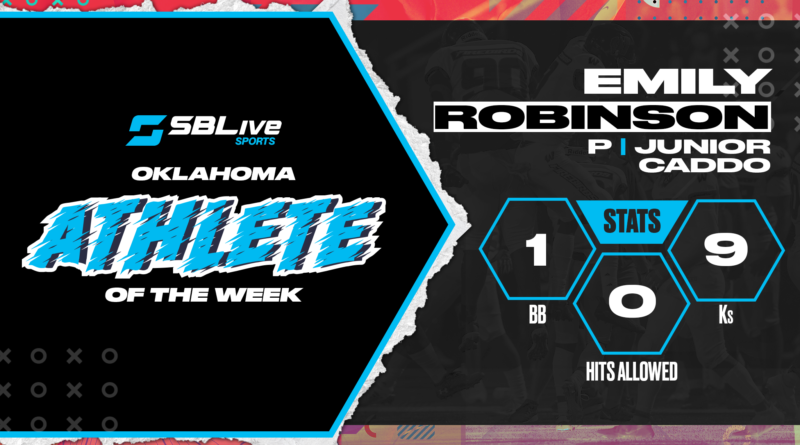 Congratulations to Caddo softball star Emily Robinson for being voted SBLive’s Oklahoma High School Athlete of the Week for Oct. 4-10!

The junior threw a no-hitter and walked just one batter as the Lady Bruins claimed the Class A state fastpitch title with a 3-0 win against Cyril. She also finished with nine strikeouts.

Robinson received 49.9% of the vote, beating out Pocola’s Ian Hardwick who finished second with 42.13%. There were over 29,000 votes tallied this week!

Burke completed 17-of-27 passes for 281 yards and three touchdowns, including a 70-yard pass on the game’s first play, in the Spartans’ 70-7 win at Choctaw in a 6AII showdown.

Jones rushed for 154 yards on 18 carries and had five touchdowns, all in the first half, in the Tigers’ 47-14 win at Edmond Memorial.

Jordan returned an interception for a touchdown and came up with a big sack on the Demons’ final defensive series as they won at defending 2A champion Metro Christian, 24-22. He also punted four times, averaging 45.8 yards per kick.

Smith had 134 yards rushing and 76 yards receiving while accounting for two total TDs in Union’s 48-10 win against Mustang.

Adams had 67 yards receiving and ended the first half by returning a kick 96 yards for a touchdown in the Rams’ 41-3 win at Edmond North.

Freeman had 231 all-purpose yards and four touchdowns, two receiving and the other two on punt returns, in the Chargers’ 49-30 home win against Bridge Creek.

Rodriguez threw five touchdown passes while adding 110 yards rushing on 13 carries and a TD in the Bulldogs’ 56-0 win against Catoosa.

DeQuasie completed 8-of-11 passes for 176 yards and two touchdowns and added 70 yards rushing, including a 10-yard TD in overtime, as the Titans survived Bishop McGuinness, 35-34.

Gray rushed for 174 yards on 14 carries with three touchdowns in the undefeated Highlanders’ 61-13 win against Oklahoma City Southeast.

Woodham rushed for 209 yards and scored three touchdowns as the Dutch downed Vinita, 48-12.

Gilkey found the end zone four times while rushing for exactly 200 yards on 26 carries as the Cardinals remained perfect on the season after a 27-3 win against Claremore.

Of the Bronchos’ first four touchdowns, Malaska had three receiving TDs in their 45-7 win against Elgin, finishing the night with four catches for 82 yards.

Brown completed 9-of-11 passes for 115 yards and a TD while rushing for 152 yards on seven carries and two TDs in the Bulldogs’ 56-14 win at Westville, a game in which both teams entered with identical 6-0 records.

Matteson had 193 yards of total offense and had two TD runs and a receiving TD in the Saints’ 49-8 win against Newkirk.

Joice was 15-of-18 passing for 138 yards and added 100 yards rushing, including the go-ahead touchdown in the final minutes, as the Tigers rallied for a 21-14 win against Sapulpa.

Taylor was 4-of-5 passing for 77 yards and a TD, rushed for 211 yards and three TDs, caught a receiving TD and also returned an interception for another TD in the Cougars’ 63-18 win against Heavener.

James caught five passes for 238 yards and four touchdowns while adding 63 yards rushing on four carries and a TD in Mangum’s 64-14 win against Apache.

Wyckoff caught four passes for 142 yards and two TDs while returning a kickoff 80 yards for another touchdown in the Lions’ 47-15 win against Alva.

Galvan rushed for 150 yards on 10 carries and scored two touchdowns in the Cyclones’ 56-8 win against Central Marlow.

Tucker tallied three rushing touchdowns while rushing for 75 yards on nine carries as the Pirates posted a 52-0 win at Sallisaw.

Hardwick was 9-of-12 passing for 120 yards and threw two touchdown passes while adding 74 rushing yards on 12 carries and a TD in the Indians’ 38-0 win against Panama.

Moton rushed for 143 yards on just six carries along with a touchdown in the undefeated Buffaloes’ 56-21 win against Durant.

Stanford went for more than 100 yards and scored three touchdowns, including his team’s first two, in the Trojans’ 49-21 home win against Norman.

Harman completed 11-of-20 passes for 143 yards and scored two rushing touchdowns in the Wildcats’ 12-0 win against Hinton.

Mays rushed for 72 yards on 14 carries and two TDs, returned two kickoffs for 109 yards and a TD and also had 31 yards in punt returns to help the Wolverines past Cascia Hall, 35-28.

Amacker rushed for two touchdowns and caught a pass for another TD in the Wolverines’ 33-28 win against Putnam City North.

Jordan caught five passes for 150 yards and scored two touchdowns in the Racers’ 49-7 win against Weatherford.

Waggle had 229 all-purpose yards in the Tigers’ 60-8 win at Tulsa McLain and scored four total touchdowns, two receiving, one on a kickoff return and the other on a punt return.

Snyder caught seven passes for 129 yards and a TD while registering nine tackles on defense in the Knights’ 38-29 win against Jones.

Jackson caught nine passes for 187 yards and two TDs while recording nine tackles and two interceptions on defense in Adair’s 28-22 win against Sperry.

Morton had five receptions for 87 yards and three TDs and also returned an interception for another TD in Rejoice’s 63-0 win against Sequoyah-Claremore.

Washington was 15-of-24 passing for 336 yards and four TDs and he also had two rushing TDs in the Chargers’ 61-6 win against Henryetta Wilson.

Silas completed 21-of-30 passes for 405 yards and accounted for five total touchdowns in Central’s 46-7 win against Mannford.

In his team’s 47-28 win against Miami, Trimble rushed for 250 yards on 23 carries and had two touchdowns.

Trimble completed 15-of-20 passes for 240 yards and three TDs and had a game-winning touchdown run in the Ridgerunners’ 34-28 win against Bristow.

White completed 15-of-20 passes for 330 yards and two TDs while adding two TD runs in the Cardinals’ 46-6 win against Inola.

Ficklin completed 15-of-20 passes for 398 yards and three touchdowns, including a 99-yard strike, in the Roughers’ 49-14 win against Bartlesville.

Dozier rushed for 235 yards on 35 carries and had three TDs in the Pirates’ 35-26 win against Colcord.

Clover ran for 232 yards on 17 carries and three touchdowns as the Ironheads posted a 49-0 win against Atoka.

Jim rushed for more than 100 yards and had four touchdowns as the Eagles defeated Central Sallisaw, 42-18.

Place went 2-for-4 with a home run and three RBI as the Lady Warriors won the Class 3A state fastpitch title with a 10-0 win against North Rock Creek. She was also the winning pitcher, striking out four batters.

McDonald drove in a pair of runs, including the go-ahead RBI in the third inning, as Roff went on to a 6-4 win against Moss for the Class B state fastpitch championship.

Beauchamp hit a go-ahead RBI double in the third inning as the Lady Rebels eventually defeated Morrison, 3-1, to take the Class 2A fastpitch state title.

Honeycutt had two hits and drove in five runs to help lift Roff to the Class B fall baseball state championship with a 12-5 win against Fort Cobb-Broxton.

Proctor hit a walk-off home run in the bottom of the seventh as the Rebels won the Class A fall baseball state title with a 2-1 win against Oktaha. Proctor was also the winning pitcher, going the first six innings before returning in the top of the seventh to strike out a batter to end the inning.

Smith won the boys division at the Tulsa Open, finishing with a time of 17:23.48.

Randall was the winner in the boys division at the Lexington Bulldogs Open, as he finished with a time of 16:47.76.

Smith was the girls division winner at the Lexington Bulldogs Open, finishing with a time of 12:41.33.

Heiden took first place in the boys division at the Henryetta Invitational, finishing with a time of 18:50.50.

Chaney won the girls division at the Henryetta Invitational, recording a time of 13:27.55.