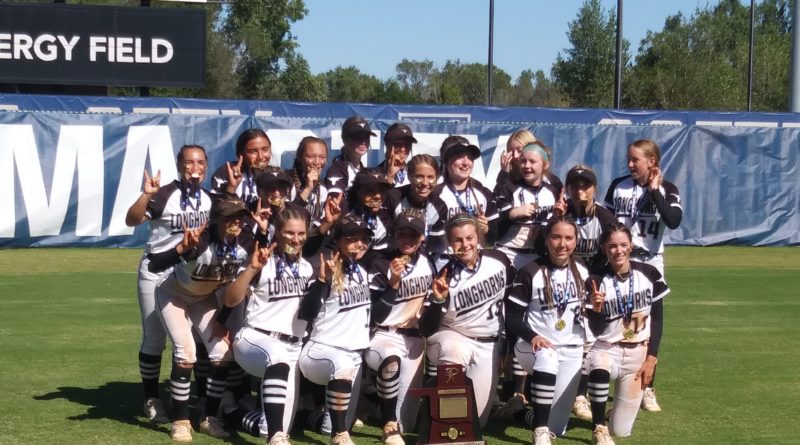 OKLAHOMA CITY — Lexi Meadows stepped to the plate in the most important situation possible for her team.

The Lone Grove junior came up to bat with one out in the bottom of the seventh and the winning run on third base in Saturday’s Class 4A state fast-pitch softball championship game.

“I’ve been struggling all weekend and stuff, and I think that I was put in that position for a reason,” Meadows said. “Just go up there thinking you can do it, like, ‘You have to score this run; this is the winning run, you can do it.'”

Meadows needed only the first pitch she saw to get that job done, for herself and for her Lady Longhorn teammates.

On that first pitch, Meadows drilled a single to right center, bringing home Taylor Mason as Lone Grove capped a tremendous, but very emotional, season with a 3-2 win against Tecumseh for the 4A title Saturday afternoon at the USA Softball Hall of Fame Complex.

“I saw it good and it looked sweet, so I just took a hack at it and it fell through,” Meadows said. “(When the ball left the infield) I was pumped, I was pumping arms, I just knew we won the ballgame with that.”

Meadows’ walk-off hit capped a run of 25-consecutive wins to end the season for the Lady Longhorns (33-5), who also won their first fast-pitch title since 2004.

Lone Grove coach Dennis Furr was very confident his team was going to finish the job.

“We’ve been rolling, we’ve been playing really well, playing really good softball and we felt like coming in if we just play our best, we’re the better team, so winning like that builds confidence, too,” Furr said. “I don’t think there’s any real pressure and I told them before the game, ‘If you don’t feel pressure and you’re in the state tournament, you’re not in the right spot.’

“We were confident coming in and we were able to do what we were supposed to do.”

While it ended up being a very successful season for the Lady Longhorns, it was also a trying one as well.

As they were about to start their season in August, two of their classmates, Jaetyn Cameron and Cole Evans, both passed away in an automobile accident. The two were members of Lone Grove’s baseball team.

“We were all close with them, so this year kind of meant a lot to the whole team and this one meant a whole lot to us,” Meadows said.

“We went through a lot this year, we had a bunch of ups and downs, and I think those two boys put us here for a reason and we came out on top.”

Meadows’ hit was set up with one out in the bottom of the seventh.

Mason chopped a ball that just went past Tecumseh pitcher Serenity Jacoway, and was able to beat it out for an infield single.

The next batter, Malea McMurtrey, singled up the middle, and the ball was misplayed in the outfield, allowing Mason to go to third.

Tecumseh (34-5) then conducted a mound visit just as Meadows was about to take her turn in the batter’s box.

“I put my arm around (Meadows) and told her, ‘Hey, there’s nobody else I would want to have up right here,’ and I said, ‘Get after that first pitch and hit the (juice) out of it.'” Furr said.

“They threw us a strike and she sure did it.”

Lone Grove broke a scoreless tie with two runs in the bottom of the fourth. C.J. Yeatts led off with a single, and Brook Langford came in as a courtesy runner.

With one out, senior Logan Ketchum came up and drilled a pitch to right for a triple, scoring Langford. Ketchum made it 2-0 when the next batter, Jordan Ramsey, hit an RBI groundout to second.

It stayed 2-0 until the top of the sixth, when the Lady Savages loaded the bases with one out against Lone Grove pitcher Emma Wilson.

That brought up Jessi Hull, a freshman. Hull put together a strong at-bat, working a full count and fouling off twoastraight pitches before holding up her swing in time for ball four, bringing in Tecumseh’s first run.

Then the next batter, Emily Bingham, hit a sacrifice fly to right, scoring Jacoway to level the score at 2-2.

The Lady Savages got a one-out single in the top of the seventh. But Wilson induced a popout to Meadows at third on a bunt attempt; and Wilson then got a grounder hit right to her to end the threat.

“I had a lot going on, but I just kept throwing strikes and kept going and spinning the ball as well as I could, to make sure that if they hit it, it wasn’t going far,” Wilson said.

That would set things up for Meadows to deliver the title-winning hit in the bottom of the seventh.

“I have no words; it’s unbelievable,” Wilson said. “We did this all for our boys; every game, every play, every strike, it’s all been for them no matter what, and I’m glad we could do it.”

Wilson gave up two earned runs on four hits, walking two and striking out four. She threw a total of 87 pitches.

Ketchum and Ramsey each had two of Lone Grove’s nine hits, with both going 2-for-3.

“It feels amazing; with everything going on, I felt like we were put in this position for a reason and we came through to pull it off,” Meadows said.