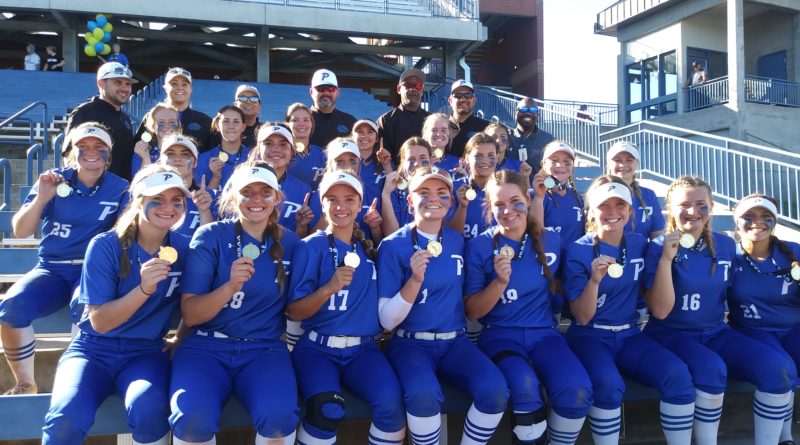 OKLAHOMA CITY — How it started this season for Piedmont sophomore Payten Schibbelhute — a broken finger that sidelined her for several weeks.

How it’s going for Schibbelhute now — helping her team win the 5A state fast-pitch softball championship.

Schibbelhute’s sharply-hit ball that deflected off Coweta’s third baseman for a single brought home Paige Atha in the bottom of the seventh and enabled the LadyCats to defeat Coweta, 2-1, for the 5A title Saturday afternoon at the USA Softball Hall of Fame Complex.

Saturday’s title also gave a happier ending for Schibbelhute than at the outset of the season, when she had her finger injury, which sidelined her from hitting for most of the season.

“I just started batting like a couple of weeks ago, and I’m really glad that I could just come back and not be stressed, just come back as much as I could,” Schibbelhute said.

She’s also the LadyCats’ primary pitcher, but Schibbelhute noted she didn’t miss as much time in the circle due to the injury.

“I had to take off for a couple of weeks because catching the ball hurt a little bit, but other than that, I could still pitch and everything.”

Saturday’s game matched the past two 5A state champions, with Coweta winning it last season and Piedmont having won it the season before.

“We pride ourselves in thinking we’re one of the hardest-working teams in Oklahoma; we do it year-round, and our kids earn their success and they earned this (Saturday).

Schibbelhute’s late heroics were set up when Piedmont got the first two batters – Atha and Ava Humphries on in the last of the seventh on a dropped pop-up and a mishandled bunt.

After Aubrey Pyle successfully laid down a sacrifice bunt that moved Atha to third and Humphries to second, Coweta elected to put the next hitter, Karissa Fiegener, on at first, bringing up Schibbelhute, who had struck out looking in her prior at-bat, in the fifth.

“When we bunted the nine-hole to move them to second and third, I knew they would walk Fiegener,” Coleman said. “But we feel extremely confident in our two-hole, Schibbelhute, and that’s why we bat them one and two, for that reason right there.”

“I had another chance (after her strikeout) and I was so excited I just swung, and hopefully hit the ball,” she said.

“(When Schibbelhute swung away) I knew we had it; I knew we got it.”

Fiegener and Schibbelhute were also instrumental in giving Piedmont its opening run in the contest.

In the bottom of the first, Fiegener led off with a double and moved to third on Schibbelhute’s successful bunt single. That set up a sacrifice fly hit by Tayvin Davis to bring in Fiegener to give the LadyCats a quick 1-0 lead.

That 1-0 score remained intact until the top of the sixth, as Coweta tied affairs.

With one out, Chaney Helton doubled and came around to score on an RBI single from Dasia Mason. But the inning ended when Pyle, Piedmont’s catcher, threw out a runner attempting to steal second.

Coweta got the leadoff batter on in the top of the seventh, but Pyle picked off the runner after a pitchout.

“We picked off two kids Thursday; it’s something we spend a lot of time practicing on,” Coleman said. “We practice a lot of pitch-out pickoffs, especially in bunt situations.

“Our catcher, Aubrey Pyle, she’s done an amazing job for us all year. She’s one of the best throwing catchers I’ve ever coached, and we put her in a good position and she does a good job for us.”

That pickoff proved costly to the Lady Tigers as the next batter, Bailey Cooper, doubled but was left stranded at second as Schibbelhute got out of the jam.

Schibbelhute gave up one earned run on five hits over seven complete innings. She walked one batter and struck out four.

At the plate, Piedmont recorded nine hits. Fiegener and Atha each went 2-for-3, while Schibbelhute was 2-for-4.

Sophomore Whitney Holcomb was the only Coweta player with a multi-hit game, as she went 2-for-2.

Piedmont has a great chance to repeat as state champs again next year with the bulk of its roster returning.

“We have three seniors in our program, and we return every kid that started in the state tournament,” Coleman said.