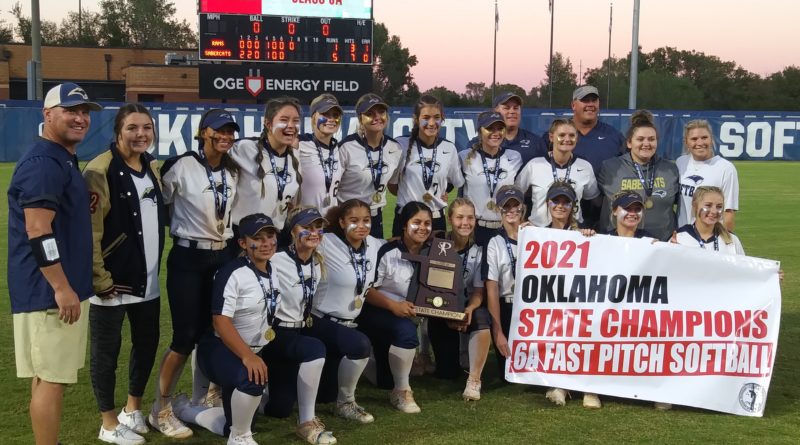 She remarked that she had no recollection of when that home run was.

But Hernandez isn’t going to forget the second homer for a long time.

Hernandez’s two-run blast over the right-field wall in the bottom of the first inning gave Southmoore the lead to stay. The SaberCats then added two more runs an inning later as they eventually finished off a back-to-back 6A championship with a 5-1 win against Owasso at the USA Softball Hall of Fame Complex.

“I really don’t remember who (her previous home run this season) was against,” Hernandez said.

“But this one was more important, so I will always remember this one.”

In Friday’s semifinal win, Hernandez drew three walks. When she came up to bat in the bottom of the first Saturday, with two out and a runner on base, Hernandez was just eager to swing away.

She nearly walked again, as Hernandez drew a full count. But she finally found the pitch she liked, and she went with it.

“I got (Owasso pitcher Preslee Downing) deep in the count and I was fighting stuff off,” Hernandez said. “I had walked three times (Friday), so (Saturday) I was really wanting to get a piece of something, and it was a high, inside pitch so I just went for it and it was over (the wall).

“I was so excited; I’m a senior, this is my last game in high school for fast-pitch, and to remember this and be able to do this, it’s such an amazing opportunity.”

“Honestly, sometimes her eye is too good and she doesn’t swing at borderline pitches, and I told her when it got 3-2, I thought they’re going to throw it on the edge, and I told her, ‘Swing it,'” Lingo said. “She can do that. … When she got her hands even with the ball and (hit it out), I was so happy for her.

“Our entire community loves Lexi Hernandez to death, and so when she did that, it jacked everybody up and our girls went crazy and I knew, it’s on now.”

Southmoore tacked on two more runs in the second, as Brylee Fanning led off the inning with a double and scored on an error. Then Riley Sharp’s RBI single drove in Kaylee Carter to make it 4-0.

Owasso pushed a run across in the top of the fourth when Madi Drummond tripled and scored on Downing’s RBI groundout. But Southmoore regained its four-run margin in the bottom half of that inning, as Abi Jones’ two-out RBI single brought in Fanning.

Southmoore senior pitcher Brinly Maples then did the rest as she finished off a three-hitter. She threw 84 pitches and walked one while striking out five, including the final batter of the game.

Maples also got help from her defense, which made several outstanding plays.

Perhaps the biggest defensive play came in the top of the sixth, when Owasso’s leadoff batter hit a shot toward right center. But SaberCat right fielder Maveryck Lightfoot made a diving catch.

“(Maples) being able to keep the ball down and hit those corners was a huge key, and like I said earlier, our defense played so well. That kept us in the game so much and it lifted our battery up, and it allowed us to keep fighting for runs, that we can’t win without that great defense.”

Saturday’s win also gave Southmoore its fourth state fast-pitch title. The SaberCats were also the first to repeat as 6A fast-pitch champions since Broken Arrow did it in 2008 and again in 2009.

Southmoore had seven hits in Saturday’s win. Fanning and Tallen Edwards each went 2-for-3, with Edwards hitting a triple.

Drummond had two of the Lady Rams’ three hits on the day.