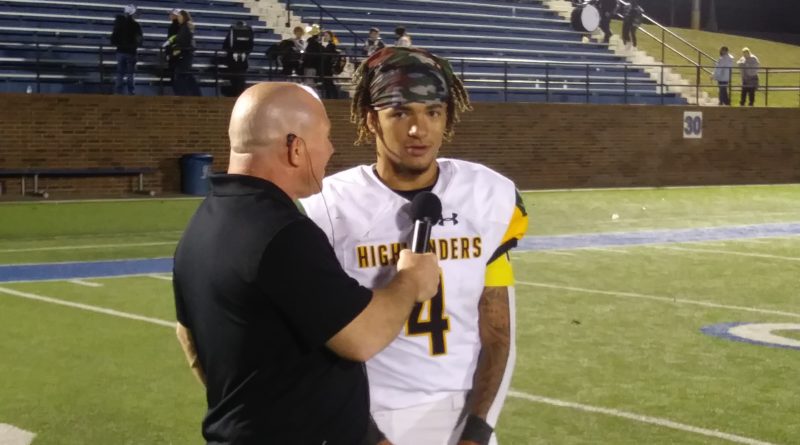 NOBLE — Following a wild first half, Lawton MacArthur began to assert its will in the third quarter of Friday’s District 5A-1 showdown with Noble.

Trailing the Bears at halftime, 28-27, the Highlanders came out and outscored Noble in the third, while MacArthur senior tailback Isaiah Gray scored four total touchdowns. The Highlanders moved to 7-0 on the season after defeating the Bears, 47-37.

“We made some adjustments, we had a plan that we liked during the week and it didn’t quite work out the way we wanted it to,” Lawton Mac coach Brett Manning said. “So we made a few adjustments in the second half, and basically I just told them, whoever’s the toughest team in the second half is going to win.”

Lawton Mac also kept Noble out of the end zone in the second half until the Bears scored a touchdown with 2:23 left. The Highlanders also intercepted two passes in the second half, one that set up a TD, and also stopped the Bears on fourth-and-goal at the 1 early in the final quarter.

“We just came out with a lot of fight and never gave up,” said Mac senior defensive back Montez Edwards, who sealed the win with an interception in the end zone in the closing seconds. “Every play, we gave it 110 percent, and we knew they wasn’t going to give up, so we had to come out and play our game, or else it was going to be a bad ending.

“It was pretty positive (at halftime); we weren’t down, we weren’t in a bad mood. We just made a few corrections on defense, and came out, executed them and won the game.”

With the Highlanders still trailing by one near the midway point of the third quarter, the game drastically turned on one play.

Faced with a fourth-and-17 from the Noble 32, Manning elected to go for it. Quarterback Gage Graham lofted a pass near the end zone, and receiver Vaughn Poppe made an acrobatic catch over a Noble defender and twisted his way into the end zone for the touchdown.

“It was just one of those (situations) where we were too close to punt, too far away for a field goal and just thought we would throw it up and see what happens, and we made a play,” Manning said.

On the next series, Mac got the ball back two plays later when defensive back Dominic Collins intercepted a pass that ricocheted off another Highlander and a Noble receiver.

Six plays later, senior tailback Devin Bush went in from a yard out, and Matthew Aguilar added the PAT for a 40-28 Mac lead with 4:32 left in the third.

The Highlander defense forced a punt, and shortly after Mac took over, Bush had his second TD, a 48-yard dash down the left sideline with 37 seconds left in the third.

“We really played well in the second half, that’s really all there is to it,” Manning said. “I felt like they had control of the game in the first half and we controlled the second half.”

Gray, though, helped keep Mac within striking distance in the first half. He had two TD runs in the first quarter, a 2-yarder along with a 54-yarder to give the Highlanders a 13-7 lead.

Then after Noble scored another touchdown just inside the last minute before halftime, Gray fielded the ensuing kickoff and broke loose on an 85-yard return to the end zone.

Again, Manning decided to go for just one point, with Noble still in front, 28-27, with 43 seconds left in the first half.

Though Gray didn’t score in the second half, he still rushed for 130 yards, finishing the game with 262 yards on 25 carries.

“The only thing I can do is thank my coaches and my teammates and the fans cheering me on, working hard and not giving up,” Gray said.

“I’ve got to give a lot of credit to everybody (for the second-half rally), but Devin stepped up and Gage and Vaughn. I’m really proud of them; they put the weight on their back and took over.”

Bush finished with 98 yards on six carries, all in the second half. Graham completed 6-of-12 passes for 77 yards, with Poppe catching three of those for 48 yards.

Lawton Mac finished with 447 total yards, 370 of those on the ground courtesy in large part to Gray and Bush.

Noble finally scored in the second half with 8:40 left in the game by getting a safety when the Highlanders were penalized for holding in the end zone. The Bears’ final TD came with 2:23 left on a 9-yard pass from quarterback Colin Fisher to receiver Brandon Harper.

Noble then went up 21-13 on a 1-yard run from Thomas, who had 103 yards on 24 carries. The Bears’ last first-half TD came on a 5-yard run from tailback Tavyan Givens, giving them a 28-20 lead before Gray broke off his long kickoff return.

The Bears ran 91 total plays and had 199 yards rushing to go with the 376 yards from Fisher.

With the Highlanders continuing their perfect season, they want to keep it going, and possibly come back to central Oklahoma, in particular Edmond, site of the state title games in December.

“I can’t wait to see what the season brings at the end,” Gray said. “We’re aiming for the gold ball, and right now we’re getting the job done.”