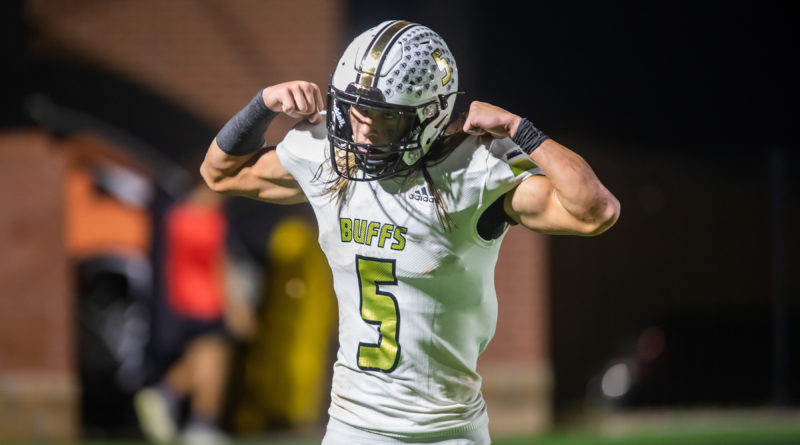 COWETA — Last year when McAlester faced Coweta, the Buffaloes held a 14-0 halftime lead before the Tigers rallied to win.

In the rematch Thursday night, which was an anticipated affair between two teams that entered with matching 6-0 records, the Buffaloes took another sizable lead into the locker room at halftime.

This time, there was no collapse.

The Buffaloes kept Coweta out of the end zone the entire game, giving up only a second-quarter safety. On the flip side, McAlester junior tailback Erik McCarty accounted for three total touchdowns playing quarterback as the Buffaloes stayed undefeated with a 33-2 win at Tiger Field.

“We pride ourselves on being physical, attacking the football, and we know against a good offensive team, they’re going to get yards and they’re going to do some things,” McAlester coach Forrest Mazey said. “The thing we had to limit them to was the big play, and we did a good job of limiting and eliminating that.

The Buffaloes (7-0, 4-0 5A-3) gave up 258 yards of total offense. Coweta reached McAlester territory five times, but turned it over on downs four times and threw an interception on the other occasion.

“I like our heart, we never give up,” McAlester junior defensive end Garrett Shumway said. “They got inside our own 50 a lot and we just never gave up, no matter what.”

McAlester has allowed just 56 points all season, an average of eight points per game. Only twice have the Buffaloes allowed double-digit point totals by their opponents.

The Buffaloes were also fueled by revenge. Last season, they took a 14-0 lead at halftime against Coweta, only to see the Tigers rally back for the win.

McAlester went into halftime Thursday with a 15-2 advantage. This time, though, there was no second-half collapse.

“We knew what we wanted to do (Thursday) and we did it. … We had to come back stronger in the second half and that’s exactly what we did, so I’m proud of everybody on this team,” said senior defensive back Killian Barnes, who had a first-half interception.

“Our defense, we’re aggressive and we’re physical. We don’t like getting points scored on us. When we have that mentality like that, it’s hard for a lot of teams to score.”

The Buffaloes ensured Thursday was going to be a different second half than last season’s game when they came out after halftime, took the kickoff, and moved 81 yards in nine plays while taking nearly six minutes off the clock.

Junior tailback Erik McCarty, playing quarterback in the Wildcat formation, finished off the drive with a 41-yard dash into the end zone on third down, extending McAlester’s lead to 21-2.

Then on the first play of the fourth quarter, McCarty took another snap in the Wildcat and initially went forward before executing a jump pass. It went over the middle to a streaking Cale Prather, and the senior receiver took it 71 yards to paydirt as the Buffs broke the game wide open, making it 27-2.

“Man, I was so scared, I was afraid I was going to screw something up and overthrow it,” McCarty said. “From what I saw, it wasn’t pretty but it got there, and that’s all that matters. … Cale’s a pretty fast guy and I’m glad he was able to catch it even though it was pretty ugly, and take it to the house.”

McCarty finished the night with 143 yards rushing on 14 carries. He also had a TD out of the Wildcat with 13 seconds left in the first half, a 2-yard keeper, and followed that with a two-point keeper that gave the Buffaloes their 15-2 lead prior to halftime.

McAlester capped the scoring with 1:20 left as sophomore tailback Ethan Watkins went in from a yard out.

For the game, the Buffaloes finished with 194 yards rushing to go along with 149 yards passing. Senior quarterback Trent Boatright completed 6-of-10 passes for 78 yards and a touchdown.

“(The offense did a great job) controlling the line of scrimmage, controlling their emotions and just punching it down somebody’s throat, and it was beautiful,” Mazey said.

Coweta (6-1, 3-1) took the opening kickoff and held the ball for 14 straight plays while advancing inside the McAlester 20. But they came away with nothing as a sack and fumble – which the Tigers recovered – and an incomplete pass on fourth-and-long turned it over to the Buffs.

Coweta got the ball back several plays later when the Tigers forced a fumble on McAlester’s opening drive. Once again, the Tigers reached McAlester territory but came up short on another fourth-down try.

The Buffs took over at their own 33 and put together their first scoring drive, moving six plays.

On the first official snap of the second quarter, Boatright pitch-passed it to receiver Caden Lesnau, who turned the corner and sprinted down the right sideline 22 yards into the end zone.

Kobe Clark tacked on the PAT, and the Buffs took a 7-0 lead nine seconds into the second quarter.

The Tigers put together another drive deep into Buff territory, but committed a turnover.

McAlester was unable to capitalize on the takeaway, and had to punt near its own end zone. But the snap was high and went out of the end zone for a safety, cutting the Buffs’ lead to 7-2 with 6:24 left until halftime.

The Tigers faced another fourth-down situation near midfield but quarterback Gage Hamm was stopped inches short on a keeper.

That set up McAlester’s second TD, which was McCarty’s first running the Wildcat in the closing seconds before intermission.

Coweta tailback Will Mason finished with 68 yards on 17 carries while Hamm added 57 yards on 16 rushes. Hamm was 14-of-29 passing for 126 yards, with eight of those completions going to receiver Mason Ford, covering 61 yards.

McAlester returns home on Oct. 22 to take on Tulsa Edison. Coweta is back in action that same night, a road game at Shawnee. Shawnee is also 4-0 in 5A-3, tied for first with McAlester, after winning at Tulsa East Central on Thursday.