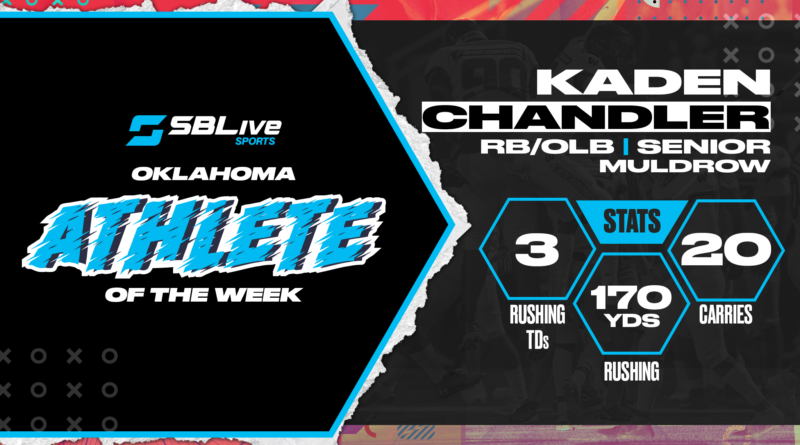 Congratulations to Muldrow RB/OLB Kaden Chandler for being voted SBLive’s Oklahoma High School Athlete of the Week for Sep. 27-Oct. 3!

The senior rushed for 170 yards on 20 carries and had three touchdowns in the Bulldogs’ 27-6 win against Sallisaw.

Chandler received 57.63% of the vote, beating out Pocola softball’s Bailey Lairamore who finished second with 40.18%. There were over 30,000 votes tallied this week!

Here are the other athletes who were nominated for Sep 27-Oct. 3:

Jones caught four passes for 89 yards, including touchdowns covering 61 and 11 yards, in the Trojans’ 31-14 win at Broken Arrow.

The freshman, who has enjoyed an outstanding season so far, had five more touchdowns and nearly 200 yards rushing as the Wolves defeated Westmoore, 48-10.

Goodwin’s 47-yard, game-winning field goal with three seconds left broke a scoreless tie and lifted the Pirates to a 3-0 win against Wagoner.

Taffe rushed for 244 yards on 28 carries and scored five touchdowns as the Fighting Irish won at Woodward, 45-14.

Watie threw for 136 yards and two touchdowns and added a rushing TD in the Chiefs’ 28-10 win against Verdigris.

Presley had the Spartans’ first two touchdowns, catching a touchdown pass and then running it in for another, in Bixby’s 81-6 win against Putnam City West, which extended the Spartans’ winning streak to 41 straight games.

Hammond accounted for three total touchdowns in the Cardinals’ 43-13 win at Sapulpa, including catching a 45-yard pass for his team’s first TD on the night.

Smith reached the end zone twice as the Yellowjackets rolled to a 36-0 win at Ponca City.

Banks was 10-of-16 passing for 174 yards and two touchdowns and added a pair of rushing TDs in Union’s 35-7 win at Putnam City.

Pennington completed 14-of-18 passes for 192 yards and two TDs and added 94 yards on 13 carries and two TDs in the undefeated Sandites’ 48-34 win at Muskogee.

Faulkner rushed for 246 yards on 27 carries and scored five touchdowns as the Chargers, who trailed 14-6 at halftime, rallied in the second half to stay undefeated with a 35-20 win at Perkins-Tryon.

Graham threw three touchdown passes as the Highlanders moved to 5-0 with a 49-8 win against El Reno.

Francis threw for four touchdowns as the Patriots posted a 44-0 win against Henryetta.

Swanson threw three touchdown passes and ran it in for another TD in the undefeated Tigers’ 61-0 win against Altus.

Yates rushed for 210 yards and had two TDs in the Eagles’ 30-7 win at Stillwater, which snapped the Pioneers’ 21-game district winning streak.

Bizzell had two touchdown receptions, including catching a game-winning pass with four seconds left, as the Titans rallied late for a 22-19 win at Guthrie.

Fields returned the opening kickoff for a touchdown and also caught six passes for 110 yards and three TDs in the Spartans’ 82-0 win against OKC Capitol Hill.

Lund had three touchdown runs and also caught a 72-yard pass for another TD in the Owls’ 33-27 win against Weatherford.

Washington was one of seven Bulldogs to score touchdowns in their 68-19 win against Locust Grove, returning the opening kickoff 95 yards for one TD and adding a 53-yard TD run later in the contest.

Watson caught two touchdown passes and returned an interception for another touchdown in the Saints’ 53-19 win at Alva.

Hayes had three touchdown runs, including scoring the Outlaws’ first two TDs, in their 45-6 win against Lindsay.

Nabavi rushed for 223 yards on 26 carries and had two TDs in the Wildcats’ 39-28 win against Oklahoma Christian Academy.

In the Tigers’ 59-14 win against Welch, Judd caught three touchdown passes and added a rushing TD.

The senior tailback continued his hot stretch of late in the Ridgerunners’ 56-27 win against Catoosa, scoring five touchdowns on 258 yards rushing.

A freshman, Larry rushed for 337 yards on 19 carries and had three TDs in the Warriors’ 52-27 win against Wilburton.

Mays rushed for 394 yards on 28 carries and had a pair of touchdowns in the Wolverines’ 55-21 win against Roland.

Rutledge completed all five of his pass attempts for 175 yards and three TDs in the Pirates’ 51-6 win against Tulsa McLain.

Franklin intercepted two passes, returning one for a touchdown, and also broke up two passes while recording two tackles for loss in the Lions’ 47-0 win against Chisholm.

Chaney hit a two-run, go-ahead double in the fifth to help lift the Lady Indians to an 8-3 win against Chisholm to win their 3A regional as Comanche reaches its first state tournament since 1989.

Lairamore’s sixth-inning solo home run proved to be the difference in the Lady Indians’ 1-0 win against Wilburton to win their 2A regional, sending Pocola to back-to-back trips to the state tournament. She also had three RBIs in an earlier game at regionals, as Pocola defeated Oklahoma Union, 15-3.

Reh drove in two runs, including an RBI triple, while striking out five batters in four innings as Minco defeated Healdton, 9-5, to win its 2A regional championship.

Harris went 6-for-6 with three home runs and 10-plus RBIs in a 27-0 win against Cashion in a 2A regional game, as the Lady Panthers eventually won the regional.

Kendall had 17 kills, three aces, two blocks and seven digs in a 3-0 win against Cascia Hall, and also had 28 kills and 13 digs as Bishop Kelley outlasted Owasso in five sets.

Otten recorded 34 kills and seven digs in a five-set win against Tulsa Union and then had 23 kills, three blocks and nine digs in Bartlesville’s three-set sweep against Bixby.

Perdue finished with nine kills and three blocks as the Lady Trojans recorded a three-set sweep against Sand Springs.

Matthews had 22 kills, two aces and four digs in the Lady Bulldogs’ four-set win against Coweta.

Chaparro won the boys 5K run at the Newcastle Invitational meet in a time of 17:25.15.

McElhaney finished first in the girls 5K run at the Newcastle Invitational meet with a time of 20:41.48.

Thomas won the 5K boys event at the Claremore Zebra meet as he finished with a time of 16:39.30.

Burcham placed first in the 5K girls division at the Claremore Zebra meet with a time of 18:41.85.

Worley took the boys division at the Hobart Bearcat meet with a time of 17:17.63.

Combs placed first in the girls divison at the Hobart Bearcat meet with a time of 13:43.06.

Coody won the boys division at the Oklahoma Bible Academy/Chisholm meet, finishing with a time of 17:26.09.

Graham took first place in the girls division at the Oklahoma Bible Academy/Chisholm meet with a time of 13:32.41.