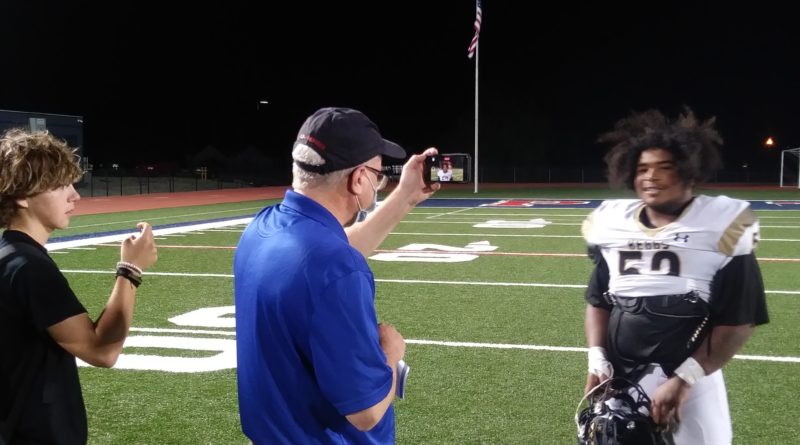 TULSA, Okla. — On the second play of Friday’s District 2A-7 showdown with Metro Christian, Beggs’ defense forced a turnover.

Although the Demons didn’t score off that takeaway, it helped dictate the business at hand Beggs sought to accomplish — to knock off the defending 2A champions and gain the upper hand in the district race.

Beggs did force two more first-half turnovers, and were able to score touchdowns off both, including a short pick-six late in the first half. The Demons then forced a fumble at the goal line late, setting up a clinching TD as they now gain control in 2A-7 after defeating the Patriots, 24-22.

“Honestly, we just had to keep fighting; we couldn’t let off,” said Beggs junior defensive lineman Chance Jordan, who returned an interception for a touchdown in the first half and had a sack on Metro Christian’s last desperation drive. “We let off, we knew that they was going to keep scoring. They were fighters, and so were we, so we just fought the whole game and got stops.”

But Beggs linebacker Lucas Roberson knocked the ball loose, and teammate Ayden Hamilton made the recovery in the end zone.

Two plays later, Beggs tailback Red Martel sprinted 81 yards to the house, and the Demons added a two-point run from fellow tailback CJ Brown for a 24-15 lead with 3:46 left.

Metro still made things interesting, driving down the field on the next series and scored with 2:21 left. Quarterback Kirk Francis took a keeper in from a yard out; then Brayden Haveman’s PAT cut the Demons’ lead to two points.

The Patriots defense then stopped Beggs, including a fourth-down play near midfield. Metro made a first down at the Demon 40, but on the next play, Jordan came up with a sack.

With the Patriots out of time outs, they were in scramble mode after the sack and the Beggs defense forced three-straight incompletions, the latter with 25 seconds left to allow the Demons to leave with the big district win.

“We liked the (defensive) scheme that we ran (Friday); it’s not the first time that we ran that scheme (a combination of man and zone defense) against them and we’ve had some success in the past with it, and our kids responded,” Beggs coach David Tenison said. “It’s hard to keep those guys off the scoreboard, and I’m really proud of our defense. … We played a lot of snaps on defense; our kids were worn out, they were tired but they never gave up.”

The Demons came up with three first-half takeaways, compared to just one for Metro.

Beggs’ first TD came five plays after junior safety Braylon Davis stopped a Patriot threat by intercepting a pass right in front of his own goal line. The Demons moved 85 yards down the field after the takeaway, the last 51 coming on a sprint down the left sideline from Brown, an Oklahoma State commit.

Then, Beggs decided to go for two and got it, as Hamilton, playing quarterback, raced in on a keeper, giving the Demons an 8-0 advantage with 3:34 left in the opening quarter.

Metro responded on the next drive, going 86 yards in 10 plays, converting five first downs along the way. The Patriots finished it off on a third-and-goal play, as Campbell took a direct snap and reached paydirt from 3 yards out.

Instead of going for a tie, the Patriots elected to kick the PAT. Haveman knocked it through the uprights, keeping Beggs in the lead, 8-7, with 14 seconds to go in the first.

Metro got its first takeaway on the ensuing series, as defensive back Mario Darrington intercepted a pass in his end zone. But the Patriots weren’t able to take advantage, eventually punting the ball away.

It remained 8-7 until late in the opening half, with Metro backed up in the shadow of its end zone. The Patriots went for a screen pass, but Jordan stepped in front of the receiver at the Patriot 2 and grabbed the ball.

Jordan finished off the short 2-yard pick-six with 56 seconds to go in the first half. Beggs then made it a two-score lead, 16-7, on another successful two-point keeper from Hamilton.

“I wasn’t expecting the screen honestly,” Jordan said. “I was happy; I didn’t think I was going to score but I scored and I was happy.”

Beggs’ defense made one more big stop before halftime, stonewalling the Patriots on a fourth-and-short near midfield.

The Demons gained 268 yards of offense, all on the ground. Martel finished with 128 yards on 11 carries, while Brown added 123 yards on 23 carries.