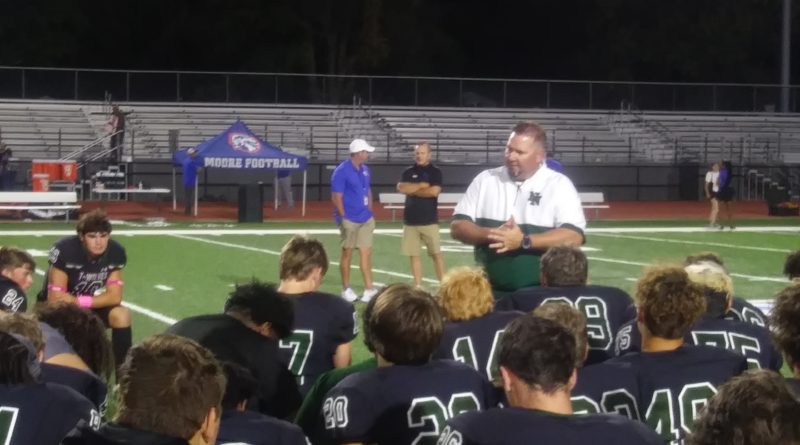 NORMAN — Over the past two weeks, Norman North allowed a total of 119 points, dropping both games.

Thursday night, the Timberwolves made a drastic turnaround on defense, and displayed a physical style of offense despite personnel changes.

Norman North built a 21-0 lead by halftime of its 6AI-2 game against previously undefeated Moore, going on to hand the Lions their first defeat, 29-6, at Harve Collins Field.

“I think the past two weeks obviously prepared us for this game, but the thing we did defensively was we played with great eyes,” Norman North coach Justin Jones said. “We understood the routes that were coming, and my hat’s off to these guys; for a bunch of 15- to 18-year olds, they prepared like a college team this week.

“Everybody kind of took it upon themselves to really make sure that we were studied up and understood what we were doing.”

Two weeks ago, the Timberwolves (4-2, 1-2) gave up 49 points in a wild one-point loss at home to Mustang. Then last week, after building a 28-21 first-half lead, the Timberwolves surrendered 49 unanswered points as Owasso rolled to a 70-28 win.

So with undefeated Moore coming in, bringing a high-caliber offense with it, Norman North was ready for the challenge.

The Timberwolves allowed 125 total yards in the first half. In contrast, they rushed for that exact same total in the span.

North’s defense ended the game by giving up 272 total yards and also had a shutout going until the final snap of the night. The Timberwolves also held Moore senior standout Marcus Dockins, a threat both running and catching the ball, to 36 yards total offense.

“Honestly, we just stuck to our preparation, and what Coach Jones just really pushed us all week to do, and we just really believed in each other and trusted each other,” said North senior cornerback Gavin Anderson, who intercepted a pass to set up a Timberwolves’ touchdown right before halftime.

“We just did our responsibility and played hard. … We tried not to do too much, not try to play hero ball, really just sticking to our preparations and doing what we do best.”

Meanwhile, North junior tailback Chapman McKown helped carry the load with 141 yards on 20 carries and one TD, along with a receiving TD.

“It’s really all just up front with the (offensive) line,” McKown said. “We knew Moore’s (defensive) line was fast this week, so we had our best guys every single down at practice going against our o-line.

“We’re obviously not as deep right now (due to injuries on the offensive line), but I had faith in every one of them and that was the big thing. … I’m just really happy that we were able to execute the run game.”

Senior quarterback Gavin Frakes was 9-of-16 passing for 128 yards and two TDs, and also added 86 yards on 12 carries.

The Timberwolves, who finished with 359 yards (231 rushing, 128 passing) were able to assert their will offensively despite a makeshift line.

“We actually had three starters out (Thursday),” Jones said. “We had a sophomore at right tackle, Kasen Lea, who actually started last week against Owasso.

“We moved our left guard, (senior) Ben Weibelhaus, to center; we moved a defensive lineman, (senior) Damon Hinchey, to left guard, our right guard was (senior) Riley Tatum and then our left tackle, who’s been a starter all year, was Harrison Utley (a sophomore).”

Moore (5-1, 2-1) won the toss but deferred to the second half. The Timberwolves didn’t take long to strike upon receiving the opening kickoff.

Norman North swiftly moved 65 yards in just six plays. On a third-and-long at the Moore 29, Frakes launched a pass over the middle, right in the hands of receiver Cason Cabbiness who waltzed into the end zone.

Will Sutherlin tacked on the PAT kick for a 7-0 North lead with just 1:54 elapsed.

“The offense goes down and scores on that first series,” Jones said. “We had a couple of drops in the first half, but we really moved the ball and did the things e needed to do.”