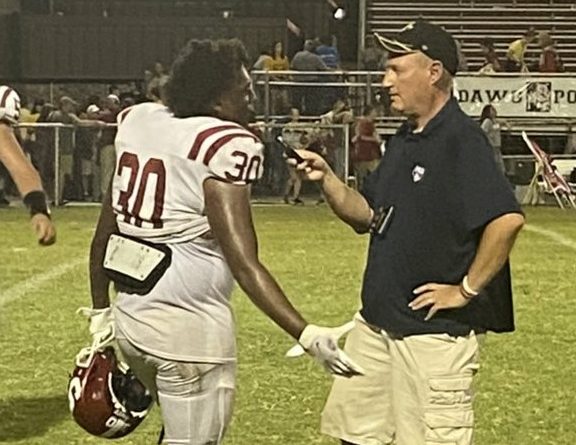 Not to mention, I still currently reside in Arkansas.

But in my previous job, a job that I spent more than 20 years at, I developed a great fondness and affection for the sports scene in the state of Oklahoma.

My previous job was spent as a sportswriter for the Southwest Times Record newspaper in Fort Smith, Ark., located right on the Oklahoma border. While it was great to see some great teams and get to know some outstanding players and coaches on the Arkansas side in my former job, I equally enjoyed the time I spent over on the Oklahoma side.

The schools we covered in Oklahoma weren’t as big as the Fort Smith schools or Greenwood. They still played football games on grass surfaces, until Poteau finally installed turf around 2015. Instead of going “up the mountain” to play schools in Northwest Arkansas, they were going “down the mountain” to face the likes of Idabel and Broken Bow.

But the athletic competition there was just as high-level as I found in the 6A and 7A classifications in Arkansas. If you’ve attended the LeFlore County Basketball Tournament or a Roland versus Muldrow game, then you know what I’m talking about.

When I arrived in Fort Smith in November of 2000, I was immediately dispatched to cover Sallisaw’s football team, which was making a run at a state championship. The Black Diamonds did make it all the way to the 4A title game, only to run into an outstanding Clinton team.

Sallisaw went back to play for the 4A title the following season and had a rematch with Clinton. The Diamonds jumped out to a 16-0 lead before the Red Tornadoes roared back to repeat as state champions.

But at that point, I was already hooked on covering Oklahoma preps.

I made my first visit to the legendary “Big House” in Oklahoma City in March of 2002, when the Stigler girls basketball team completed an unlikely run to win the 4A state championship. The “Big House” turned out to be a place where I saw a few more local teams get their dreams realized, and unfortunately where a few more teams got their high hopes shattered.

In 2007, I saw the Howe Lady Lions fall to Cashion in the Class A title game on a shot at the buzzer (Howe did come back the following season to win state, but I was not in attendance that day).

Then in 2013, maybe the greatest sporting event I ever covered, from start to finish, the epic 4A boys basketball title game between Roland and Oklahoma City Douglass, a.k.a. the duel between scoring machines Seth Youngblood of the Rangers and Stevie Clark of the Trojans.

While Youngblood did put on a show, scoring more than 40 points, Clark did the same as the Rangers fell a few points shy of winning their first title. They’re still waiting to win that elusive first title.

But on the flip side, I saw the greatest finish I ever witnessed to a sporting event at the “Big House.” In 2008, on a day when future Division I players Rotnei Clarke (Verdigris) and Keiton Page (Pawnee) led their respective teams to state titles, it was Pocola’s Callie Slate who was the topic of conversation afterward.

Slate capped a wild sequence of eight points scored in the final seven-tenths of a second by nailing a desperation shot from just beyond half-court, giving the Lady Indians a miraculous win against Walters for the 2A title.

In 2019, I went back to “The Big House” and saw a tremendous performance by Howe’s Jalei Oglesby, one of the state’s all-time greatest scorers, who helped will her Lady Lions to the 2A championship. Two years later, without Oglesby, the Lady Lions added another gold ball to their trophy case with an impressive all-around team performance against Silo.

I also saw some great football teams on the extreme eastern side in my time with the Times Record.

Along with the Sallisaw teams in the early 2000s, I covered the great Vian teams in the mid 2000s and early 2010s, the 2013 Poteau team which made it all the way to the 4A title game and some solid squads like Spiro and Roland.

But those teams never came away with the gold ball. Finally, in 2019, in the first state title game played at UCO’s Wantland Stadium, the Poteau Pirates won their first, holding off Weatherford, 9-7, for the 4A championship.

But thanks to my regional editor, Nate Olson, who offered me this fantastic opportunity, I took the chance to leave the newspaper business and go into the business of writing stories exclusively online.

Nate is someone I have known for more than 20 years and we have a lot of things in common, mainly a love of high school sports. We’re also reunited under the same company umbrella, as back in the day, I worked as a sports editor in Siloam Springs, Ark., and he was a sports writer in nearby Bentonville, both of us working for papers under the same company.

I wouldn’t be in this position if it wasn’t for Nate, and I’m grateful that he has offered me this chance to expand on my coverage of Oklahoma high school athletics.

It will give me the opportunity to see up close and personal some of the legendary programs in this state in various sports.

I’m also looking forward to getting to know even more coaches and athletes who have already left an indelible impression in this state, and I’m looking forward to telling their stories. I also can’t wait to go back to UCO and the “Big House” and see some more gold balls being awarded and getting to talk to members of those title teams.

A quick disclaimer: I still live in Fort Smith, and it’s going to be pretty tough for me to go to ballgames west of Yukon. Just for the heck of it, I checked on the distance from my house to Boise City in the panhandle, and I’m 509 miles from there.

But I want to make the panhandle and the western side of the state just as important as on the eastern side along with the Oklahoma City and Tulsa metropolitan areas.

Football is nearing the stretch drive toward the postseason. Softball and volleyball state tournaments are on the horizon. The winter sports are about to be heating up, so I think it’s a great time for me to jump in and find out about all the goings-on around the state.

A state I have immediately associated myself with, even more so than my native state.

I’m looking forward to seeing you at stadiums and arenas across Oklahoma. If you have a story idea or if you want to also write for SBLive Oklahoma, reach out to me on Twitter, @Buck_SBLiveOkla.