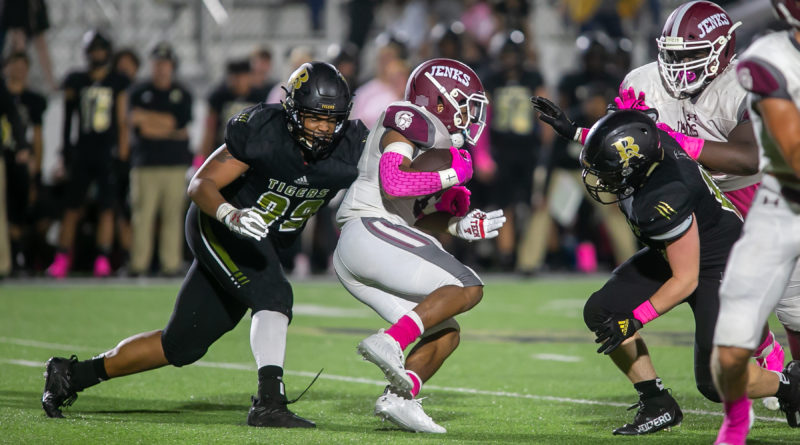 Jenks’ defense pitched a shutout over the final three quarters and after freshman quarterback Shaker Reisig threw three touchdowns in the first quarter, the Trojans primarily went to their ground game. The end result was a 31-14 Jenks win against the Tigers in 6AI-1 action Friday night at Broken Arrow Memorial Stadium.

In that first quarter, there was a combined five touchdowns from both teams, including the aforementioned three TD passes from Reisig.

“The first quarter was way different than the rest of the game,” Jenks coach Keith Riggs said. “But hat’s off to both defenses; they battled back and kept them in the game for a while, and we feel like we may have had some unforced errors and some points left we could have taken advantage of, but we’ll learn from them, we’ll watch film (Saturday) and hopefully, we’ll get better from it.”

Over the final three quarters, the Trojan defense limited BA to 150 yards, forced a turnover that set up the final Jenks TD on the night and produced four sacks, two from senior end Colemon Thurber.

“I thought we were very aggressive and then very, like doing of our job, but I think we just got off to a rough start at the beginning and we picked it up in the second quarter,” Thurber said. “A big thing was communicating and rallying to the ball; it was a very good effort (Friday).

“(On the two sacks) I was just trying to get back there and make plays for my team.”

Meanwhile, while the Trojans (4-1, 2-0) relied on Reisig’s arm in the first quarter, they used the legs of junior tailback Jaiden Carroll to help clinch affairs. Carroll finished the game with 115 yards on 25 carries and had 14 of the Trojans’ 23 offensive plays after halftime.

“I just want to give thanks to the (offensive) line and the offensive coaches. I ran behind my o-line the whole night, looked for openings and I made a safety miss. … Our coaches tell us all the time, big time players make big time plays in big time games, so that’s what I do.”

Reisig completed 9-of-15 passes for 157 yards, 106 which came in the opening half. He gave Jenks an early jolt right out of the gate.

On the second play of the game, Reisig threw a deep pass to receiver Glenver Jones. Jones hauled in the pass around the BA 30 and found paydirt, getting a key downfield block from teammate Jayden Johnson to find the end zone for a 61-yard touchdown just 17 seconds in.

Max Paskvan came on to kick the PAT, giving the Trojans a quick 7-0 lead.

Three plays later, the Trojans got the ball right back when defensive back Cade Stacy intercepted a pass at his 38 and returned it to the Tigers’ 47.

It took seven plays for Jenks to find the end zone again, and once more, it was the tandem of Reisig and Jones finding the path.

This time, it was an 11-yard pass to Jones, who hauled it in over a defender in the back left corner of the end zone. Paskvan’s PAT made it 14-0 with 7:15 left in the first.

BA (2-3, 1-1) answered right back with an eight-play, 65-yard series, culminating with a 5-yard TD pass from senior quarterback Griffin Stieber to senior receiver Ryan Fox. Hunter Martens’ PAT cut the Trojan lead to 14-7 with 4:31 still showing in the opening quarter.

Just 14 seconds later, the Tigers tied it as linebacker Dietrich Moore picked off Reisig’s pass at the Jenks 21 and raced untouched into the end zone, followed by Martens’ PAT.

However, Reisig and the Trojans responded, moving the ball 80 yards in seven plays. Reisig threw his third TD pass, as he escaped pressure from BA defensive back and Oklahoma commit RJ Spears-Jennings by flipping a pass to Carroll, who did the rest as he waltzed into the end zone.

“I was just knowing in the back of Shaker’s head the play is never over until the whistle is blown, and he made a guy miss and got me the ball, so we played through the whistle and we got a touchdown,” Carroll said.

Paskvan tacked on the PAT for a 21-14 Jenks lead with 37 seconds left still in the first quarter.

The Trojans forced another turnover as action shifted into the second quarter, forcing a fumble on a pass play. Junior linebacker Kaiden Vannoy made the recovery at his own 40.

Jenks used eight plays, all the ground, to regain a 14-point advantage, with junior tailback Jalyn Stanford blasting his way in from 2 yards out with 5:29 to go in the first half, followed by Paskvan’s fourth PAT to make it 28-14.

Both teams had the ball one more time in that half, but each drive ended with third-down sacks, courtesy of Thurber and BA linebacker Briley Ferguson.

The lone score in the second half occurred on Jenks’ opening drive, which ended when Paskvan drilled a 49-yard field goal with 5:04 left in the third quarter.

BA had one last gasp when the Tigers advanced to the Jenks 10 with eight minutes left in the game, but the Trojans’ defense came through once more, stopping the Tigers on fourth down.

“At halftime, the real focus was just (BA) was kind of changing the tempo, going fast and slowing things down and so, we had to be prepared for that and make sure, more importantly, we’ve got to be lined up and all on the same coverage,” Riggs said.

The Trojan defense held BA to 16 yards rushing on 20 attempts. Stieber was 16-of-26 passing for 201 yards and the one touchdown.

BA senior receiver Maurion Horn had four receptions for 73 yards, while junior tailback Nathaniel Jones caught four passes for 17 yards and was the Tigers’ leading rusher with 27 yards on 11 carries.

Next Friday, Jenks returns home to take on Norman, while BA travels to Edmond Memorial.