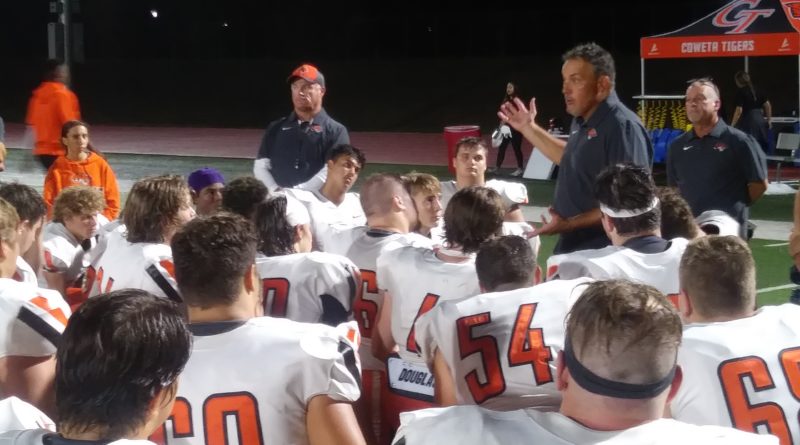 As far as he’s concerned, though, there’s nothing like the present.

Coweta finished the first half of the regular season with a perfect 5-0 record Thursday night, scoring on each of its first four possessions in building a 24-0 lead against Tulsa Rogers. The Tigers then extended it to 41-0 by halftime en route to posting a 55-14 win against the Ropers in District 5A-3 action at Rogers High School.

In Coweta’s 24-point outburst over the Tigers’ first four series, they ran 14 plays and picked up eight first downs while the Ropers ran nine plays and didn’t record a first down.

“We’ve got to shore up some things on the offensive line; we had plenty of yards, that wasn’t the issue, but they did a great job of just sending the house on us and we were a little out of sync offensively (Thursday), so that’s on me,” Harper said. “We’ll get better. … Our kids played hard, we just didn’t necessarily play our best offensively.”

Harper, though, was quick to praise the play of his defense. The Tigers held Rogers (3-2, 1-1) to just 17 yards in the first half, with the Ropers scoring two third-quarter touchdowns against mainly reserves.

“Our defense played really well; we subbed some kids out in the second half when they got a score or two. … But our defensive kids play hard, our coaching staff over there does a tremendous job of preparing.”

The Tigers themselves believed their defense came to play Thursday.

“Defensively, I think we did really well,” Coweta senior safety Cade Denton, who set up one of the Tigers’ first-quarter scores with an interception, said. “There’s just a couple of (kinks) we’re going to have to work out; mainly just a couple of coverage things, but other than that, I think we played fundamental defense and I think we’re really sound this year.”

Coweta also got a boost from junior tailback Will Mason, who rushed for 118 yards on 13 carries with a ­pair of first-half touchdowns.

“It was a blast, and it’s always a blast running behind my linemen because it’s like, whenever my linemen do something wrong or I do something wrong, we’ve always got that bond, that friendship and connection that says, ‘We’ll get back out here, we’ll block for you, we’ve got your back, we’re going to help you get off the ground if something happens and we’ll carry you to this end zone,'” Mason said.

Coweta received the opening kickoff, and exactly one minute later, the Tigers had their first score on the night. Sophomore Lo Lo Bell finished off a six-play, 52-yard drive by taking a counter handoff, darting to the right and sprinting in from 13 yards out.

Brody Rucker tacked on the PAT for a 7-0 Coweta lead.

The Tigers forced a three-and-out on the Ropers’ initial series, and got the ball back with good field position after a Rogers punt landed 13 yards to the Ropers’ 31.

Coweta moved the ball to the 15 before the drive stalled, and Rucker came on to kick a 32-yard field goal for a 10-0 Tigers’ lead with 7:27 left in the opening quarter.

After another three-and-out by Coweta’s defense, the Tigers needed just two plays to add to that advantage. One play after Mason Ford took a sweep 17 yards to the Rogers 25, Will Mason zoomed in for the final 25 yards.

“Very seldom does the first guy take him down,” Harper said of Mason. “When he gets them knees up, he’s a brute.

“He’s got to learn to run a little bit more behind the shoulder pads; that way nobody can get to his knees, but I’m real proud of him and the effort.”

Following Mason’s TD, Harper called on another kicker, Parker Stephens, to make the PAT. Stephens’ kick was true, and the Tigers were up 17-0 with 5:23 still showing on the clock in the initial quarter.

Three plays later, the Tigers got the ball right back as Denton intercepted a deflected pass at his own 40.

On the very next play, Coweta quarterback Gage Hamm launched a deep pass, which Ford caught over his shoulder near the Rogers 20. Ford did the rest, rolling into the end zone for another Tiger six-pointer.

Rucker connected on the PAT for a 24-0 Coweta lead with 4:05 remaining in the first.

The Tigers then scored on all three of their second-quarter possessions.

Stephens made it 27-0 by kicking a 23-yard field goal with 9:39 remaining in the opening half.

Rogers finally picked up its initial first down on the ensuing series, but the Ropers had to punt it away yet again. Coweta put together a seven-play 46-yard drive.

Sophomore receiver Eain Williams, who earlier caught a 23-yard fourth-down slant to the Rogers 18, got the call by taking a deceptive handoff and sprinting in from 9 yards out with 3:25 left until halftime. The PAT from Rucker made it 34-0.

Then after Coweta forced another punt, taking over at the Ropers’ 34, Mason took a handoff and went in for the touchdown. Stephens tacked on the PAT for a 41-0 Coweta advantage with 1:21 remaining in the half.

“At moments, we played very well; then there was other moments we didn’t play very well and I’ve got to give (Tulsa Rogers) a lot of credit for that,” Harper said. “I know we scored (41) points in the first half and probably should have scored another (touchdown) if we wanted to, and so with that said, you can’t fault us.

“We’re shooting for something bigger, and I didn’t really think we took advantage of all of our opportunities, and I was a little bit disappointed in that. But you’ve got to take your hat off to (Rogers coach Parker) Childers over there and how far their program’s come and those kids did; he told me before the game they would not quit and they would compete and they did that, so give those guys credit.”

Indeed, the Ropers took the second-half kickoff and quickly marched downfield in five plays, finally getting on the scoreboard on a 4-yard run from junior Lawrence Breckenridge. The kick was blocked, keeping Coweta’s lead at 41-6.

The Ropers then scored again on the final play of the third quarter, when senior quarterback Macuric Demry hooked up with senior receiver Rashaun Jamison from 56 yards out. Demry threw a two-point pass to Breckenridge to make it 41-14, Tigers.

But Coweta came right back and scored on its next series, capped by a 12-yard pass from Hamm to receiver Kevon Robinson with 8:37 left. The kick from Rucker made it 48-14.

Coweta’s final TD came with 4:38 left on a 15-yard keeper by backup quarterback Colton Howard. Stephens finished off the scoring with his final PAT kick on the night.

The Ropers drove back down the field in hopes of getting one more touchdown, but on the game’s final play, Coweta freshman Kyler Moore intercepted a pass in his own end zone.

“I think we came out really fired up, because we just want to prove ourselves,” Mason said. “We want to keep proving ourselves, keep getting better and keep preparing ourselves to beat not anyone but everyone.”

For Rogers, which ended up with 217 total yards on the night, Demry was 13-of-24 passing for 165 yards. Breckenridge caught five passes for 35 yards and was the team’s top rusher, gaining just 26 yards on seven carries as the Ropers ended up with 47 yards on the ground.

Coweta returns home on Friday, Oct. 8 to take on Tulsa East Central, while Rogers goes on the road that same night to face Shawnee.