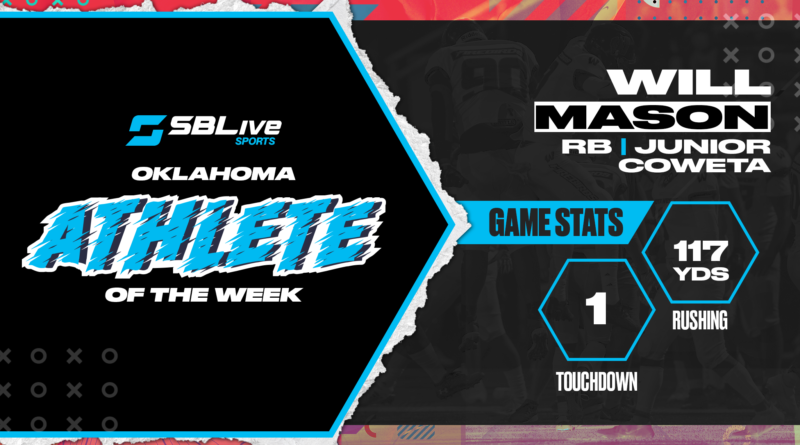 Congratulations to Coweta running back Will Mason for being voted SBLive’s Oklahoma High School Athlete of the Week for Sep. 6-12!

The junior rushed for 117 yards and a touchdown as the Tigers posted a 42-6 win against Frontenac, Kan.

Mason received 51.86% of the vote, beating out Haskell’s RayLin Morgan who finished second with 40.15%. Whitesboro’s Madison Grogan finished third with 4.89% and Berryhill’s Jaxon Watie finished fourth with 2.13% of the vote. There were over 13,000 votes tallied this week!

Here are the other athletes who were nominated for Sep 6-12:

Trimble threw three touchdown passes and added a 57-yard TD run to pace the Ridgerunners to a 44-6 win against Jay.

Watie threw three touchdown passes to help the Chiefs to a 35-7 win against Cascia Hall.

Sterling rushed for 107 yards and a TD as the Bulldogs rebounded from last week’s loss to Coweta with a 21-7 win at Tahlequah.

Carroll rushed for 89 yards and a touchdown and caught a pass for another touchdown to help the Trojans shut out Tulsa Union, 22-0.

Smith caught a touchdown pass and returned an interception 15 yards for another TD in a 45-0 win against Southwest Covenant.

Taffe rushed for four touchdowns and tallied 154 all-purpose yards to help the Fighting Irish to a 49-6 win against Bishop Kelley.

Rogers had two rushing touchdowns, a receiving touchdown and returned an interception for another TD as the Bulldogs bested Vian, 49-13.

Gilkey rushed for 136 yards on 14 carries and had four touchdowns as the Cardinals rolled past Skiatook, 43-7.

Freeman caught four passes for 116 yards and had 133 return yards, including an 86-yard punt return for a TD, while returning a fumble 72 yards for another TD in the Chargers’ 39-24 win against Clinton.

Johnson completed 12-of-20 passes for 171 yards and two TDs and also had a rushing TD in Westmoore’s 35-14 win against crosstown rival Southmoore.

Norment scored two touchdowns among his first four carries to lift Putnam City North to a 26-10 win against Piedmont.

Matteson caught six passes for 82 yards and had the game’s only touchdown as Oklahoma Christian School prevailed, 9-0, against Crossings Christian.

Hall passed for 176 yards and two TDs while adding 222 yards rushing and five TDs to lift Balko-Forgan to a 62-30 win against Tyrone.

McKeefry completed 34-of-45 passes for 465 yards and four TDs and added a rushing TD in the Bulldogs’ 38-14 win at Sequoyah-Tahlequah.

Lyons rushed for 253 yards on 16 carries and had four touchdowns in the Indians’ 47-20 win against Central Sallisaw.

Dennis threw four touchdown passes as the Tigers remained undefeated with a 35-7 win against Newcastle.

McKown rushed for 213 yards on 18 carries and three TDs as the Timberwolves defeated Edmond Memorial, 49-25.

McCarty rushed for 167 yards on 16 carries and had two touchdowns as the Buffaloes defeated Ada, 42-14.

Dockins had 287 all-purpose yards and had three total touchdowns, including returning the opening kickoff 84 yards, as the Lions stayed undefeated with a 41-30 win against Norman on Sept. 9.

McCracken finished with 10 kills in her team’s four-set win against Tuttle on Sept. 7.

A freshman, Ward finished with 21 digs and 16 assists to lead her team to a hard-fought five-set win against Community Christian on Sept. 9.

Roberts had 30 assists, two blocks and two digs in the Lady Trojans’ three-set sweep against Norman North on Sept. 9.

Glenn had 12 kills, a block, an ace and three digs as the Lady Pioneers bested Yukon in three sets on Sept. 9.

In the Lady Longhorns’ three-set sweep of Sequoyah-Claremore on Sept. 9, Biggs had 10 kills, six aces, seven digs and two assists.

Serafin had seven kills, four aces, a block and five digs to help lead her team to a three-set sweep against Wesleyan Christian on Sept. 9.

Watson hit her eighth home run on the season in helping lead the Lady Tigers to a 16-5 win against Midwest City Carl Albert on Sept. 11.

Parker tossed a three-hitter and struck out 15 as the Lady Indians defeated Morris, 4-1, in the championship game of the Morris Tournament.

Last week, Edwards batted 10-of-16, which included a six-RBI game against Mustang in helping her team go 6-0.

Grogan threw a two-hit shutout in a 3-0 win against Webbers Falls and combined on a one-hitter in a 5-1 win against Wilburton while totaling 17 strikeouts.

Nye tossed a four-hit shutout and struck out nine to help the Lady Lions end Pocola’s 14-game winning streak with a 6-0 win on Sept. 7.

Ellis gave up one hit and struck out seven in a 5-0 win against Stigler on Sept. 11. She also went 2-for-3 at the plate with a pair of RBIs.

Morgan’s walk-off RBI single in the bottom of the eighth lifted the Lady Haymakers to the championship of the Mounds Tournament on Sept. 11. She was also the winning pitcher, striking out seven.

Hicks took first place at Friday’s Southeastern University Invitational in Durant with a time of 18:32.57