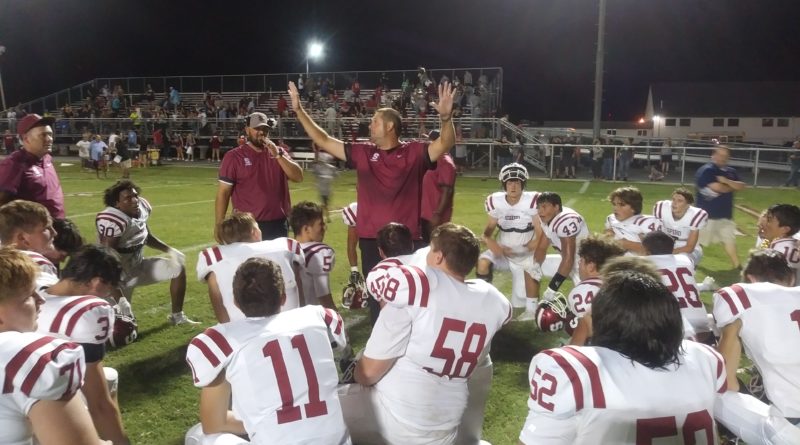 MULDROW, Okla. — For the first time in more than 30 years, the Spiro Bulldogs football team has a different head man roaming the sidelines.

Brett Davis, who spent 20 years coaching in California but is a native of Heavener in LeFlore County, brought a variation of the run-and-shoot offense with him that he calls the 44 shoot upon taking over as Spiro’s coach last winter. It’s a stark contrast to the previous coach, Hall of Famer Chris Bunch, who won 228 games in 31 seasons at Spiro primarily using a run-oriented offense.

While Spiro was able to air it out again Friday, it was actually the running game that gave the Bulldogs their biggest lift — in particular, the performance from senior tailback Braxton Peterson.

Peterson scored six touchdowns — five coming on the ground — as Spiro erased a 35-27 fourth-quarter deficit to defeat Muldrow, 41-35, in the “Battle of the Bulldogs” at Aubrey J. Henshaw Bulldog Stadium.

“We knew we had the box look (by Muldrow’s defense) that we wanted to run the ball against, and we were able to throw when we needed to a little bit there, but we really had the front that we were kind of hoping to get and kind of had it the whole game, and the offensive line said, ‘We got it,’ and we went,” Davis said.

Spiro was held to 27 yards rushing in the first half, and went into the halftime break trailing Muldrow, 21-13. But in the second half, Spiro rushed for 171 yards on 35 carries.

Peterson, a senior who is a four-year starter at linebacker but is in his first season playing tailback, was a big beneficiary of the emphasis on the run game. Held to just three yards on two carries in the opening half, he went for 75 yards in the second half with four touchdowns.

His last touchdown came with 1:37 left, a 2-yard run to complete an eight-play drive that covered 47 yards, which was set up when Spiro’s Kadon Craig recovered a fumble.

Spiro’s reliance on the run game in the second half also took some of the pressure off of senior quarterback Alan McKeefry. McKeefry, who threw for 465 yards and four touchdowns in a win the week before at Sequoyah-Tahlequah, was hampered by a sore knee after slipping on the turf during Spiro’s second series Friday but was still able to stay in and compete.

“The plan (after halftime) was to feel them out because we like to pass the ball, and we weren’t getting good looks,” Peterson said. “Alan went down real fast probably the second drive or so, so we had to wing it; we had to pull something out of our back pocket and the run game was there.”

Peterson also caught a 2-yard pass in the first half from McKeefry for Spiro’s second touchdown. In addition, Peterson accounted for 40 of Spiro’s 41 points as he also had a pair of two-point conversions, including catching a pass from McKeefry after the eventual game-winning TD with less than two minutes left.

After Friday’s win, Peterson was quick to congratulate his offensive line.

Someone else who took advantage of Spiro’s emphasis on the run in the second half was senior running back Nathan Maner, who finished with 125 yards on 19 carries, with 91 of those yards gained in the second half.

“When I was gassed, he came in for me and did what he needed to do,” Peterson said. “And my touchdowns were his touchdowns, we got them together.”

On Spiro’s game-winning drive, Maner had five carries for 34 yards, including a 20-yard run down to the Muldrow 3, setting up Peterson’s go-ahead TD two plays later.

“It’s mainly thanks to my O-line; if they didn’t block and the coaching staff that we have, if they didn’t do their jobs, then I wasn’t running the ball good,” Maner said. “But (the offensive line) blocked the guys they needed to block and opened up the holes that I needed and I just did my job, just take off and run.”

Spiro then sealed the win with 1:29 left, as Gabe Perez intercepted a pass. With Muldrow out of time outs, Spiro took three kneeldowns in raising its record to 3-0.

“We just started going really fast in kind of wearing them down and was able to lean on them,” Davis said. “To be able to run and get back in the game and take the lead, it’s an amazing thing, an amazing team effort. … Just a great effort across the board by everybody.”

Muldrow (1-2) had taken a 35-27 lead with 10:47 left when senior Kaden Chandler, playing quarterback in the “Wildcat” formation, took a keeper 29 yards into the end zone, with David Frias kicking the extra point.

But Spiro responded with an 11-play 80-yard drive as Peterson found the end zone for the fifth time, a 6-yard run, which was his longest touchdown run of the night.

Spiro then went for the potential game-tying two-point conversion, but a pass fell incomplete, keeping Muldrow in front, 35-33, with 6:43 left.

Three plays later, Spiro’s defense forced the huge turnover and the visitors capitalized on it.

“I personally thought we were doing good; our defense was locking down that we needed, our offense was running the ball good,” Maner said. “I thought, well, if we can keep up with what we’re doing, we’re going to take the (win).”

“There was no worry; as ugly as that felt in the first half, there was no panic or worry at all, this was what we practice for and this is what the system’s about,” he said.

Spiro finished the game with 420 total yards. McKeefry completed 24-of-31 passes for 222 yards and no interceptions.

His counterpart, Muldrow’s Reid Sutton, passed for 208 yards and three touchdowns on 11-of-18 completions.

Sutton threw consecutive touchdown passes to break an early 7-all score, a 66-yard pass to Trenden Collins as well as a 14-yarder to Chandler early in the second quarter that put Muldrow up, 21-7.

After Spiro rallied to tie the score at 21-all on its opening second-half series, Sutton found Joshua Price three plays later for a 34-yard TD that helped Muldrow regain the lead, 28-21.

Spiro answered with an 11-play, 80-yard drive as Peterson found the end zone from 2 yards out. But the PAT kick attempt went wide right, keeping Muldrow in the lead, 28-27, late in the third quarter.

Chandler finished with 100 yards on 14 carries and two touchdowns, including Muldrow’s opening touchdown on a 43-yard run on the third play of the game. Collins caught four passes for 116 yards, while Price had three receptions for 47 yards.

With Spiro finishing pre-district play, the Bulldogs now set their sights on 2A-5 action, starting next Friday with a short trip to fellow LeFlore County school Panama.

“It feels great,” Maner said. “With us going into district 3-0, it definitely puts like a standard to us.”

Muldrow is back at home next Friday to start District 4A-4 action against Fort Gibson.