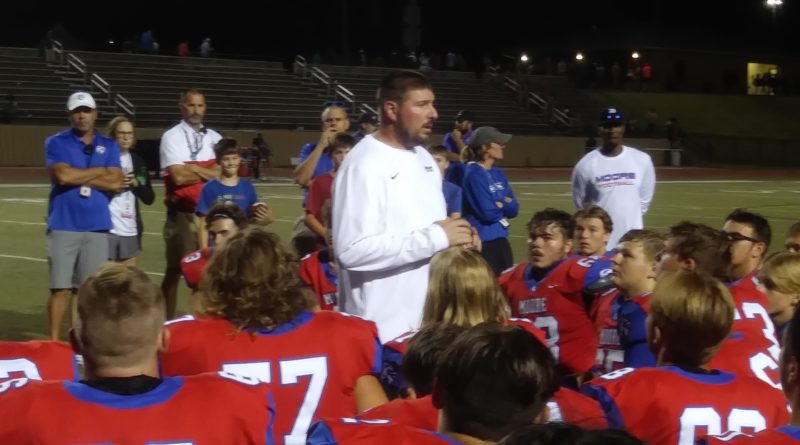 MOORE, Okla. — There wasn’t a lot of time for Moore to thoroughly enjoy a historic win.­­

Thursday night, six days after the Lions snapped a 21-game losing streak to rival Westmoore in the “Moore War,” they returned to Moore Schools Stadium to take on Norman.

Inevitably, two chief concerns for the Lion coaching staff was the shortened break between games — not to mention a potential letdown after last week’s win.

“We talked about that before the game, we were real open and honest about that kind of stuff,” said Moore coach Brad Hill. “We had a very big win for our community and our school, and we were turning around and playing a really good football team on a short week that we knew would be hungry.

“We talked about it, you can’t come out flat, you need to come out with a lot of energy and you can’t have a letdown off a huge win.”

Marcus Dockins returned the offering 84 yards for a touchdown and added two first-half offensive touchdowns as the Lions built a 31-6 lead, going on to a 41-30 win.

“We just came out, we practiced hard, we were focused,” Dockins said. “We were like, we can’t be too hyped and then drop down and lose this game, we’ve got to come out with the same intensity and I think we did that (Thursday).”

And with the win, Moore – picked to finish last in 6AI-2 by one statewide preseason publication – suddenly finds itself with a sparkling 3-0 record heading into the district opener on Sept. 24.

“We’re just keeping our mindset straight; we just need to keep on going and keep on track,” senior tailback/linebacker Julio Sandoval said. “We just need to stay motivated and not fall down.”

In addition to returning that opening kick for a TD, Dockins – a senior who primarily plays receiver and defensive back – also scored rushing and receiving touchdowns in the first half while finishing with 287 all-purpose yards.

“It was a real good (first) half,” Dockins said. “We came into this game and coach was like, ‘Well, I need you to get a kickoff return and score,’ and I was like, ‘All right coach, I got you,’ so I just did it and was like, OK.”

Dockins rushed for 133 yards on 13 carries, caught three passes for 70 yards, and as previously mentioned, returned the opening kickoff 84 yards.

“He’s just so versatile,” Hill said of Dockins. “Last week, he scored a touchdown at running back, at receiver and at quarterback and then (Thursday), he scores one in special teams, in receiving and rushing.

Dockins fielded the opening kickoff at his own 16-yard line. He eluded a pair of Tigers and shook off a potential tackle around the Moore 40 before finding open space, taking it in all the way for an 84-yard touchdown.

The PAT from sophomore kicker Liam Evans gave Moore a 7-0 lead just 15 seconds into the affair.

Midway through the first quarter, the Lions attempted to extend that advantage, advancing inside the Norman 10. However, Tiger free safety Dax Noles squelched the threat by intercepting a pass at the goal line.

But two plays later, the Lions got the ball right back deep in Norman territory. Moore’s defense forced a fumble, and sophomore defensive back Cameron Hayes made the recovery at the Norman 9.

After a false start penalty moved the ball 5 yards back to the 14, Moore quarterback Denver Wolfe took a keeper up the middle and darted into the end zone. Evans’ PAT made it 14-0 with 4:38 left in the first quarter.

In Norman’s season opener last week, the “Crosstown Clash” against archrival Norman North, the Tigers also trailed 14-0 in the first quarter before getting on the scoreboard.

History repeated itself for Norman. After falling behind 14-0, the Tigers marched 68 yards in six plays, and the player that scored Norman’s first TD last week did so again on Thursday.

Quarterback Tias McClarty finished off the drive with a 15-yard TD keeper on third-and-long. Earlier in the series, he threw a 39-yard screen to running back Devin Alexander, who raced down to the Moore 15.

But after McClarty’s touchdown, the PAT kick failed, keeping Moore’s lead at 14-6 with 2:56 left in the opening quarter.

From the Moore 36, Dockins took a handoff and appeared to be brought down by a tackler a few yards in. But he maintained his balance and broke loose, going in for a 64-yard touchdown with 2:01 left in the first as the Lions went up 21-6.

The Tigers were forced to punt on the next series, and once again Dockins found a way into the end zone as action shifted into the second quarter.

On the second play of the quarter, Wolfe threw a quick middle slant in traffic to Dockins. Dockins caught the pass and was once again off to the races, this time completing a 46-yard TD.

That latest touchdown happened 15 seconds into the quarter, the same amount of time Dockins needed to return the opening kickoff the quarter before. Evans’ kick boosted the lead to 28-6.

Moore forced another punt and proceeded to put together a sustained drive, taking nearly six minutes off the clock. But the drive stalled at the Norman 17, and Evans came on to kick a 34-yard field goal, as Moore’s lead grew to 31-6 with 2:50 left in the opening half.

The Tigers were able to move the ball right before halftime, aided by two 15-yard Lion penalties. Norman got the ball down to the Moore 14 with three seconds left, before deciding to kick a field goal.

Senior Colyn Wade’s kick on the 31-yard attempt was true as time expired, with Moore going into the locker room maintaining a commanding lead, 31-9.

The Tigers then began the second half with a strong kickoff return of their own, as Luke Morrow brought it back 44 yards to the Moore 37. That set up a seven-play 63-yard drive, ending with a 5-yard TD run from sophomore tailback Devin Alexander.

Late in the third quarter, the Lions moved 58 yards in 12 plays to reach the end zone once again. On a second-and-6 from the Tiger 23, Wolfe launched a pass on the left side.

Saxon Scantlin, a senior, got a step ahead of his defender and was able to haul in the ball while crossing the goal line. Evans kicked another PAT to make it 38-15 with 1:08 left in the third.

Norman continued to hang tough, scoring again on its next series as McClarty flipped a short pass to tailback Xavier Shackleford. Shackleford did the rest as he outran the Moore secondary for a 48-yard TD on a third-and-30 play.

Moore got some more insurance as Evans connected on a 20-yard field goal with 4:34 showing on the clock.

Just 1:07 later, McClarty scored on a 6-yard TD run and then hit Edric Lambert for two more points. But the Lions kept the ball the rest of the way, with Wolfe turning a pair of keepers into first downs to run out the clock.

Moore finished with 440 yards of total offense, 302 coming on the ground.

“Our offensive line did a great job all night; I didn’t really have any pressure when I was throwing the ball,” Wolfe said.

“I think we had really good communication with the offense,” Sandoval said. “I was talking to them, if you didn’t have a good block, I would talk to them and they would fix it and we had some pretty good plays.”

Norman (0-2) returns home to Harve Collins Field next Friday to take on Mustang. For the Lions, they get some well-deserved time off and won’t return to action until Sept. 24, when they open 6AI-2 conference play against another crosstown foe, Southmoore.

“I really liked our toughness, we made really big plays when we had to,” Hill said. “We talk about the pre-district, the district and the postseason and getting better each week, and 6AI is a gauntlet every single week, it’s hard and so you celebrate the wins you get and we’re very happy to be 3-0.”