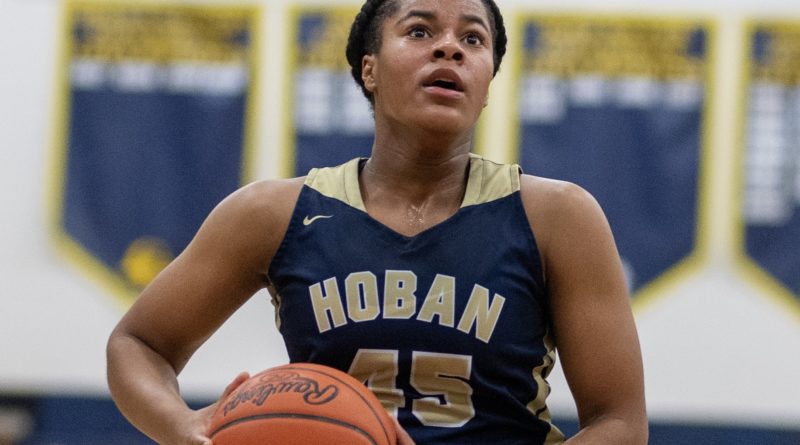 AKRON, Ohio — In a world filled with me-first athletes who care more about individual achievements than team success, it can be rare to find a star player who thinks about the team ahead of their own personal accolades.

Archbishop Hoban senior post player Lanae Riley fits that bill, however. And Riley would have every reason to flaunt her personal stats.

She was named first-team All-Ohio as a junior last season while averaging 22.1 points and nine rebounds per game, and she shot 63% from the field.

It’s a role she relishes.

“As a team, it is better if we have team chemistry where they aren’t worried about, ‘Oh, Lanae is just getting the ball all the time,’” Riley said. “I want them to think of me as a team player, so they want to play with me.”

That isn’t just lip service from one of Hoban’s captains.

When you watch Riley during a game, she doesn’t scream at teammates when they miss her in the post after she works her way to get open. She doesn’t embarrass a teammate who might have missed a defensive assignment. She just moves on to the next play.

“She doesn’t pout if she doesn’t get her touches in the paint,” Hoban coach Pam Davis said. “She doesn’t have to take a volume of shots to get her average. If you look at her out on the court, she has a calm demeanor about her.”

It all goes back to Riley wanting to be a great teammate.

The unselfishness that Riley displays is one of the reasons she was named a team captain. She is what Davis refers to as a “three-tier leader.”

“She can be vocal when she needs to be, but she is not overbearing,” Davis said. “She is a great student with over a 4.0 GPA, and she is a great overall kid. Socially you aren’t going to see her hang out with the wrong crowd or doing things she shouldn’t be doing.”

That 4.0 GPA isn’t a product of taking easy classes to get her credits and play basketball, either.  Just like on the court, she is a leader in the classroom at Hoban.

“She challenges herself with the toughest classes we have,” Hoban principal T.K. Griffith said. “She is currently in an honors physics class, a CCP (college credit plus) math class and beyond.”

Griffith notes that Riley is “not afraid to challenge herself.”

Going to Hoban in the first place was one of those challenges.

After starting her high school career as a freshman at St. Vincent-St. Mary, where she and the Fighting Irish made it to the state semifinals, Riley decided to make a switch and head across town to Hoban.

For Riley, STVM was actually across town, as she lives just a few minutes from Hoban and about 15 minutes from STVM. She was taken in with open arms at 1 Holy Cross Boulevard.

“It was a difficult decision, but I think Hoban was the best choice for me because it was closer to home and (STVM) was a little further,” Riley said. “It didn’t take me long to get comfortable at Hoban because when I got here everyone was very welcoming and open to me coming here to play.”

She has made the transition to Hoban seamlessly. Her presence and positive attitude have been felt around Hoban since her arrival.

“She is really just first-class in everything she does,” Griffith said. “She is a gentle spirit. She is positive. The comments her teachers have left on her report cards convey the admiration that people have for her around here.”

Riley’s ability to transition from one atmosphere to another should help as she continues her basketball career next season at Middle Tennessee State. Not only will she be going to a new location and school, but she might also find herself playing a different position.

“I kind of foresee her being a stretch 4 in college,” Davis said. “She is going to be very successful at the next level.”

One of the ways Davis has tried to help Riley prepare for the next level is to challenge her to be better defensively on the perimeter.

As with everything else, Riley has listened to the coaching and taken steps to improve as the season progresses. It was evident Saturday in the win over Olentangy Liberty when she stepped out on the wing and kept a smaller player from getting around her, forcing her to give up the ball.

“She has really been working on her perimeter defense,” Davis said. “I told her that even though she plays the 5 for us, at the next level she is going to have to defend kids who can penetrate and shoot it.”

While she could be asked to step outside as a stretch 4 in college, the coaches at Middle Tennessee State have told her she will get the opportunity to play in the post as well.

Along with the school being not too far from home but also not too close, it is one of the reasons she chose to become a Blue Raider.

“The position I am going to be playing is outside and inside,” Riley said. “I think that they had the best interest for me playing-wise. Some of the other schools wanted me to play just on the outside, and that is not the type of style I want to play.”

When she does step outside for Hoban, teams have to respect her shot.

Late in the game against Olentangy Liberty, Riley took a pass at the top of the key and drained a 3-pointer. It is a skill she added to her repertoire this season with a lot of offseason work.

When asked how good it felt to step back and drain a 3, she just smiled.

“It felt great because I don’t come out and shoot a lot. I score most of my points in the paint,” Riley said. “It just feels good that the stuff I have been practicing is translating into the game.”

Along with that jumper, Riley showed off a little bit of everything in that 63-40 win over Olentangy Liberty on Saturday afternoon.

She tipped a pass out to the perimeter and then grabbed the offensive rebound off the missed shot and put it back for a score; she showed her footwork with an up-and-under move for a score; she set screens and rolled off them for a catch and score; she sealed off a defender in the paint to allow a teammate to drive for a layup ,and even ran the floor in transition for a basket.

And she showed the strength that has made her a dominant force in the paint.

That strength Riley possesses in the post doesn’t come by accident.

It comes from putting in the work in the weight room with Hoban’s strength and conditioning team led by director Mike Winkler and assistant coach Maddie Diestel.

“She is very dedicated and is a leader for all of our young girls,” Winkler said. “Her effort shows the young girls how important the weight room is for her. Therefore, they work that much harder. It’s really cool to see.”

Speaking of training and workouts, Griffith — who is also the boys basketball coach at Hoban — offered up a story from this past offseason about just how good Riley can be.

“She came to our boys open gyms for at least eight open gyms in the fall and kind of dominated on the inside a little bit,” Griffith said. “Our guys can’t stop her either. She could probably start in the post for us and be just fine.”

When told what Griffith said, Riley just sort of shook her head and gave a little smile that could be seen even through the mask she wore without elaborating on the workouts, exemplifying why Davis calls Riley a “humble superstar.”

Vote now: Who is the top center in Ohio high school girls basketball?