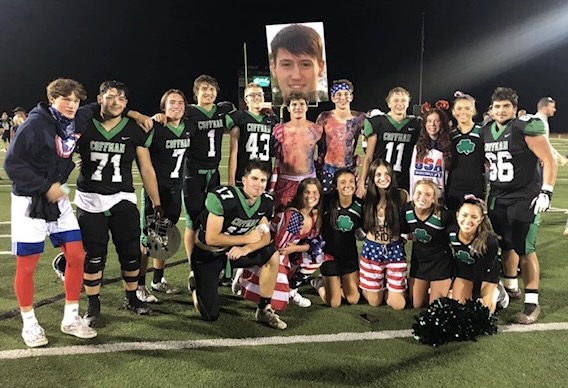 By Aaron Blankenship | Photos and video courtesy of the Dring family

In a recent game at Northland, Dublin Coffman boys basketball coach Jamey Collins was thrilled to see Aidan Dring playing with the same intense energy he’d exhibited throughout most of his career.

The senior guard played suffocating defense, hustled after loose balls and scored 10 points to help lead the Shamrocks to a 60-45 victory over the Vikings.

The only visible signs that Dring had recently endured major brain surgery and 33 grueling radiation treatments in the weeks leading up to his senior season were a scar and a bit of hair loss on the back on his head.

“Aidan’s an incredible young man and a great athlete who does in the right way,” Collins said. “I got chills watching him running up and down the court when he returned, because you could still see the scar on his head as a reminder of what he’s been through. His radiation treatments took a toll and slowed him down a lot, and he couldn’t defend or ball-handle the way he used to early on, because he was dead tired.

“But Aidan has dealt well with his struggles, and by the Northland game, his energy level was back up again and he had a great game. He’s special in the way he carries himself every day, and it’s just been amazing to see how hard he’s worked to get back to playing this well in such a short amount of time.”

Dring started at shooting guard in the Shamrocks’ first six games, and he averaged 4.2 points despite playing limited minutes in Coffman’s first couple of contests as he continued to work himself back into basketball shape.

More importantly, Dring has resumed his role as a lockdown defender capable of guarding an opponent’s best point guard, shooting guard or small forward, depending on what Coffman needs him to do.

“Aidan’s also a great teammate who has a great calming influence on the court,” Collins said.

‘A winner and a leader’

Senior point guard Ajay Sheldon, an Ohio University recruit averaging a team-high 26.6 points, said Dring has played a major role in the Shamrocks’ success this season, as Coffman has started 6-3 overall and 3-1 in the Ohio Capital Conference-Central Division.

“Aidan’s a warrior, and when he was gone, his leadership and energy level didn’t go unnoticed,” Sheldon said. “It was crazy how quickly everything happened, because he was gone all of the sudden, and just weeks later, he was back with us, making things easier for all of us.

“He’s a winner and a leader, and a great person and teammate. He’s a great catch-and-shooter, and he’s real smart in basketball terms. He’s a great defensive player who tears offenses apart.”

Dring said he is grateful to be playing basketball with his teammates at Coffman once again after enduring such a frightening, painful and exhausting health crisis in the months leading up to this season.

The 6-foot-1, 155-pound athlete had been blessed with good health throughout the first 18 years of his life, and he steadily rose up the ranks of Coffman’s basketball program the previous three years.

After starting for Coffman’s freshman squad, Dring made the Shamrocks’ varsity squad the following season and became a starting shooting guard as a junior.

Last season, Dring averaged 8.1 points and was second-team all-league and honorable mention all-district for the Shamrocks, who finished 12-7 overall.

While playing travel basketball and working hard to improve his game during the offseason, Dring caught the attention of several Division III college coaches.

However, Dring began having dizzy spells and feeling nauseated in August, and he became so ill on his way to a recruiting visit to Allegheny College in early September that he had to quickly return home and go to the hospital.

That’s when an MRI revealed a large ependymoma tumor growing near the lower part of his brain stem. Ependymomas are very rare cancerous tumors that start in the brain or spinal cord.

Just six days after the tumor was found, Dring would need to undergo brain surgery.

“When we got the results of the MRI, I went into complete shock,” Dring said. “The worst part was the complete uncertainty of if I was going to be able to play basketball again.

“I had my doubts and fears, but I went through a lot of horrible torture with the dizziness and nausea, so I was excited to get this thing figured out. I just wanted to get through it, so I could get back to playing basketball as soon as possible.”

On Sept. 9, renowned neurosurgeon Jeffrey Leonard completely removed the tumor from Dring’s brain after an eight-hour surgery, as Scott and Jenn Dring spent their 21st wedding anniversary praying for their son in the waiting room.

“It was very nerve-racking, and there was the agony of waiting through the surgery, which felt a lot longer than eight hours,” Scott Dring said. “One of the worst visuals was seeing all of the cords and the machines hooked up to him after the surgery.

“But Aidan’s the toughest person I’ve ever met. There wasn’t a tear shed from him. He was ready to take all of this on and get back for his first basketball game.”

Dring returned home just three days after his surgery, and he surprised his teammates and coaches when he started attending Coffman’s open-gym sessions two days later.

However, Dring then had to endure 33 consecutive days of radiation therapy treatments, beginning in late October and concluding on Nov. 24.

“Doing that for 33 straight days was brutal and challenging, but it wasn’t anything I couldn’t handle,” Aidan said. “It was frustrating to have to make that 25-minute drive to the hospital after practice every day, and I was really exhausted at times. But when I was finished, it was a huge weight off my shoulders.”

Throughout the ordeal, Dring received letters and tweets with words of encouragement from countless people, including college coaches, as well as high school coaches and players from other teams.

A large community gathering was held in Aidan’s honor the day before his surgery, and his older brother, Tyler, drove home from the University of Cincinnati to support his family during the surgery.

“I can’t say enough about the support we had from the entire Dublin community and so many other people, because it really helped us make it through this,” Scott Dring said.

Liv Dring — a Coffman junior and Aidan’s younger sister — and his teammates on the basketball team painted the large rock outside Coffman’s football stadium white.

Students from Coffman and Jerome then put green and gold handprints on the rock in a unified show of support for Aidan before the Celtics and Shamrocks squared off in a football game on Sept. 10.

Several Coffman football players put Aidan’s uniform No. 23 on their ankle tape before playing Jerome. After the Shamrocks defeated the Celtics 49-42 in overtime, Coffman’s players posed for a picture at midfield with Liv, who held up a large photo of her brother.

“The amount of messages I received was shocking, and that meant everything to me,” Aidan said. “All of that support kept me going through the tough times.”

Dring was cleared to begin participating in full-contact practices in early November, and he worked his way back into Coffman’s starting lineup by the time the season opened.

“I wasn’t happy with my performance the first couple of games because I was way out of shape, but I’ve been improving, and I felt like I was back to normal by the time we played Northland,” Aidan said. “I love basketball, and I’m just really enjoying being back around my friends and teammates because that’s what I missed the most when I couldn’t be with my team.”

Dring was finally able to take his official visit to Allegheny College in November to meet with coach Bob Simmons, who sent him letters of encouragement and a team photo during his recovery.

The National Honor Society member — who carries a 3.7 cumulative grade-point average — isn’t yet sure if he wants to play college basketball, but he plans to study sports management or sports marketing in college.

In the meantime, Dring is savoring his final season of high school basketball.

“My goal for this season is to help our team win a district championship, because that’s something we haven’t accomplished in my four years here,” Aidan said. “Being back on the basketball court with my teammates feels amazing, because this is what I was working toward the whole time I was out.”