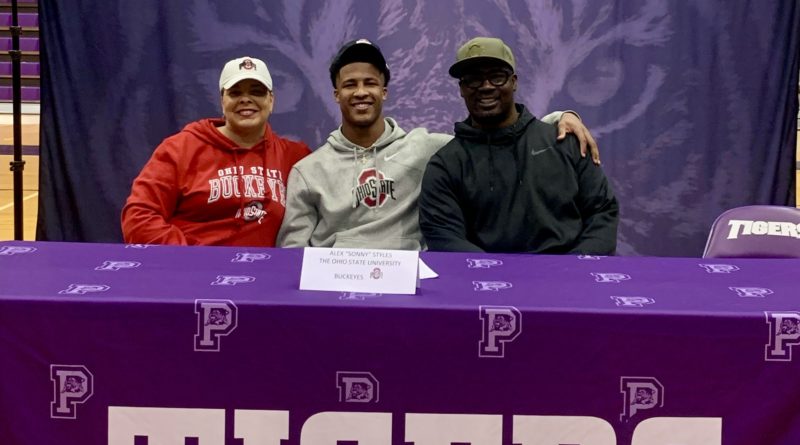 Alex “Sonny” Styles sent shockwaves through the college football recruiting landscape shortly after completing his junior season at Pickerington Central when he announced he’d graduate from high school a year early so he could get an early jump on his college football career.

Styles — a five-star safety who signed a national letter of intent with Ohio State on Dec. 15 — reclassified into the 2022 recruiting class, and he’s on pace to graduate from Central in May.

But even though Styles is excited to join the Buckeyes for summer workouts in June as the top-ranked safety in the nation in the 2022 recruiting class, he emphasized that it wasn’t an easy decision, and he didn’t view his time at Central merely as a stepping stone.

“This was a real tough decision because your senior year is special, and you can never get your high school years back,” Styles said. “This is a great opportunity, obviously, that puts me ahead a little bit, but I want people to understand that I care about high school and my high school football team. High school is a special place, and the bonds that I’ve made with my coaches and teammates here will last a lifetime.”

Although Styles will still be 17 when he starts at Ohio State, his parents, Lorenzo Sr. and Laverna, are confident he is mentally and physically mature enough to make the transition to college football.

Lorenzo Sr., who played linebacker at Ohio State before enjoying a six-year career in the NFL, served as Central’s defensive backs coach during Sonny’s three seasons with the program.

“This was his decision, but we wouldn’t have allowed him to do this if we didn’t think he’s ready,” Lorenzo Sr. said. “As his senior year went on, this looked to be the better move in his development. The fact that he’s going to Ohio State helps, because he’s only going to be 20 minutes away from home, and his family will be here to support him and guide him if he needs it.”

Challenging himself against older, high-level athletes is something Sonny has excelled at throughout his life.

Sonny began playing football at age 5, alongside many of Central’s seniors, including defensive linemen C.J. Doggette and Tyler Gillison, both of whom are University of Cincinnati recruits.

“Sonny has always been a great athlete and leader ever since we started playing football together way back in little league,” Doggette said. “He wants to win. He took care of the (defensive backs) and helped everyone learn from each other and their mistakes. He has always been the athlete that could play wherever you need him to.

“No doubt in my mind, he will start early (at Ohio State).”

Sonny has benefited from learning the game of football from his father and also competing against his older brother, Lorenzo Jr.

Lorenzo Sr. played linebacker at Ohio State from to 1992 to 1994, before being drafted in the third round of the 1995 NFL draft and playing for the Atlanta Falcons for two seasons and the St. Louis Rams the following four seasons.

After winning a Super Bowl with the Rams in 2000, Lorenzo Sr. transitioned into coaching football, as he went on to serve as linebackers coach at Ohio Dominican University (2010-11), defensive line coach for the Marion (Ohio) Mayhem of the Continental Indoor Football League and defensive coordinator for the Dayton Silverbacks of the CIFL.

Lorenzo Sr. was the head coach of the Marion Blue Racers of the United Indoor Football League in 2012, before serving as an assistant coach at Central the past 10 seasons, where he helped guide the Tigers to Division I state titles in 2017 and 2019.

“I noticed certain things about my sons when they were younger that told me they had talent, but as their father and one of their coaches, I made sure they were surrounded by good influences and that they continued to work hard,” Lorenzo Sr. said.

Lorenzo Jr. was a star wide receiver at Central for four seasons, and he had the game-winning touchdown catch in the Tigers’ 21-14 victory over Cincinnati Elder in the 2019 state final. The 2021 Central graduate is contributing at wide receiver and on special teams as a freshman at Notre Dame this season.

“My sons definitely competed with each other in one-on-one drills to keep sharp,” Lorenzo Sr. said. “But the biggest competition they had was playing basketball in our driveway. They’re both football players, so the fouls were very physical, and I had to come be the referee to make sure things didn’t get out of hand.”

Lorenzo Sr. credits his wife, whom he jokingly refers to as “The Warden,” with playing a major role in Sonny’s development into a good athlete, student and person.

“Teamwork makes the dream work, and my wife is a big part of our kids’ relentless pursuit of excellence,” Lorenzo Sr. said. “If you’re going to come into our house with anything less than a 3.5 grade-point average, you have to talk to The Warden, and our kids learned pretty quickly that it’s easier to work hard to pursue excellence than to make excuses.”

After Sonny missed his entire freshman football season while recovering from a broken tibia, he had four interceptions as a sophomore to help Central win a fifth consecutive regional title, before the Tigers eventually finished as state runner-up.

As a junior, Sonny had 75 tackles and three interceptions, including one that he returned for a touchdown, and was first-team all-district and second-team all-state for the Tigers, who won the Ohio Capital Conference-Buckeye Division title at 5-0 and finished 12-2 overall.

“We’ve had a lot of great players come through our program over the years, and when it comes to notoriety, Alex is up there with the top players we’ve had,” said Central coach Jay Sharrett, who has led the Tigers to a 202-38 record, eight regional titles and two state championships in 19 seasons. “His performance on the football field speaks for itself. He did big things for us, and now he’s going to do even bigger things at Ohio State.”

At 6 feet 4 and 215 pounds, Styles has experience not only playing as a free safety and lockdown defensive back, but he’s also played outside linebacker and defensive end.

Ohio State football coach Ryan Day said during a recent press conference that Styles could line up in several positions for the Buckeyes’ defense under the direction of defensive coordinator Jim Knowles.

While serving as the defensive coordinator at Oklahoma State the past four seasons, Knowles has used a 4-2-5 base formation.

“We’re going to use him everywhere we can,” Day said. “He can do a lot of things. He can cover. He can blitz. He can play zone. He can play man. He’s like a Swiss Army knife out there, so I know our guys on defense are going to be excited to have him in different roles as he builds.”

Sonny is hoping to play well enough at Ohio State to help lead the Buckeyes to Big Ten and national titles. He also hopes he can follow in his father’s footsteps by playing in the NFL.

“I don’t think I’ve arrived at all yet,” Sonny said. “I’ve learned a lot from my family, and now I want to go to college and prove myself by winning championships, getting a degree and building a reputation of being a nice guy who is a good person. I also want to make it to the next level (the NFL) and to accomplish big things there.”

Lorenzo Sr. said he and Laverna are proud that their son has developed into a well-rounded person, in addition to becoming an elite athlete.

Sonny was nicknamed after the short-tempered Sonny Corleone character from “The Godfather” when he was a youngster, but even though the nickname stuck with him, he shed that image many years ago.

“The thing that a lot of people don’t know about Alex is he’s the most loving guy in our house,” Lorenzo Sr. said. “He always wants to cuddle up with someone and go to sleep. He’s a kind-hearted individual who always looks out for others. If he were a more selfish person, he could play college basketball, because he’s always looking to get his teammates involved, instead of scoring a lot of points and worrying about his own statistics.

“As parents, we’re thankful and know we’re blessed that our children have turned out this way.”