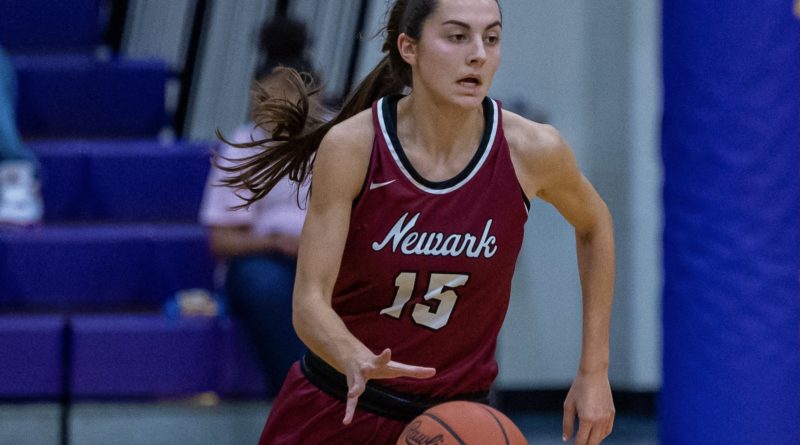 Over the next few weeks, we’ll be taking a position-by-position look at some of the top players in Ohio high school girls basketball.

Our first list focused on the point guards, and now we shift to the shooting guards.

There are hundreds of standout girls basketball players in Ohio, and these lists are not intended to be comprehensive! Use the comments section to discuss the other shooting guards worthy of fans’ attention in 2021-22.

Pictured above is Newark’s Gwen Stare (photo by Gabe Haferman).

Was named second-team All-Ohio last season after averaging 17.9 points and four rebounds per game while shooting 58.1% from the field and 41.8% from 3. She enters her junior season No. 8 on the all-time scoring list for CVCA. Helped CVCA win a share of the conference title last season and also the school’s first district championship.

Special mention All-Ohio last season, she averaged 16.8 points and 6.8 rebounds per game. She is a four-year varsity starter for Jackson. She is a deadly 3-point shooter but can play inside or outside. She is committed to play next year at Walsh University.

Transferred from Lakota West after earning first-team All-Ohio honrs last season with 25 points, 7.4 rebounds, 3.7 assists and 2.5 steals per game. A very hard worker who makes a huge impact on both ends of the court. She works extremely hard on the ball to start the defense. Because of how she is often defended, she is a tireless worker without the ball in her hands — constantly moving — but extremely unselfish in passing the ball and trying to set up teammates for success. She is committed to the University of Oregon.

Was named second-team All-Ohio last season with 15.8 points, 6.3 rebounds and 3.1 assists per game. She can score in a lot of ways, as she is very explosive and can get to the basket, has a great post game for a shooting guard and can also shoot the ball. On the defensive end, she is a very strong defender.

A natural scorer who can create her own shot and hit from all over the floor and can handle the ball. She is a selfless player who is willing to take a charge on defense and dive on the floor for a loose ball. She is committed to the University of Akron.

She was named special mention All-Ohio as a freshman, when she hit 67 3-pointers and scored 16 points per game. She also averaged five rebounds, 2.2 blocks, two assists and two steals per game. Over the offseason, she got stronger and added to her range. She is scoring from all over the court and averaged over 19 points and seven rebounds per game through the first couple of weeks this season.

She averaged 12.3 points and 4,2 rebounds per game last season, earning first-team all-conference honors and was also named second-team All-Ohio. She is seen as one of the best shooters in the area. She is the ultimate competitor and leads by example.

Was named first-team All-Ohio in Division III last season as a sophomore with 20.4 points, 3.5 rebounds, 3.5 assists and 2.7 steals per game. She has proven to be a great shooter but can also drive by a defender with her quickness. She is also a very good ball-handler. She has committed to Thomas More University.

Earned first-tam All-Ohio honors last season by averaging 20.2 points per game and reaching double digits in scoring in every game. She excels at driving the ball to the basket and finishing. She can also shoot from the perimeter. She has signed to play at Ohio State.

Was named second-team All-Ohio last season and first-team all-district after averaging 14.7 points, 4.5 rebounds, two assists and 2.6 steals per game. She is an excellent shooter and got off to a hot start this season, averaging 22.3 points per game on 43.8% shooting from behind the arc. She has a high basketball IQ and is a good defender. As a team, she has helped lead the Patriots to a 77-11 record through three seasons and three consecutive regional championships.

Earned all-conference honors last season and is a matchup issue for most defenders because of her ability to handle the ball and pass for someone her size. She can pass and rebound well for the position. She is an asset defensively as she can guard multiple spots, including stepping out on the opposing team’s top scorer. She was selected Stark County’s Girls Athlete of the Year for 2020-21 after being all-county in volleyball (helping team to regional finals last two years), basketball and track and field (state qualifier in discus and high jump last season).

Averaged 18.8 points, 4.9 rebounds, 2.8 steals, 2.4 assists and 0.7 blocks per game while shooting 43% from 3-point range and 59% from the field last year. She is an excellent shooter and set the school’s single-season 3-point record as a freshman with 58 makes. She was named second-team All-Ohio last season and would become the program’s first-ever four-time All-Ohioan if she finds a spot on this year’s teams. She has committed to Ohio Dominican University.

Averaged 16.9 points per game as a sophomore last season and was named third-team All-Ohio. She is a great shooter from the perimeter but can drive to the basket as well. She has great vision and is an excellent decision maker on the floor.

Likes to attack the basket and can do so from the left or the right. Also possesses a good mid-range and perimeter jumper. She has great instincts and combines that with a high basketball IQ. She is also a great rebounder from the guard spot. Was named honorable mention All-Ohio last year in Division I, as well as first-team all-conference.

She averaged 17 points, 6.2 rebounds, 3.9 steals and 3.8 assists a year ago, leading the team in scoring, assists and steals and was second on the team in rebounding. She is a dangerous shooter from outside and can get her shot off lightning quick. She is a 1,000-point scorer and holds the career scoring average record in school history and will become the all-time leading overall scorer in school history this season. She was named a first-team all-league performer last season and has signed to play at Wright State.

Named second-team All-Ohio in Division II last season with 21.5 points, 6.2 rebounds, 6.5 steals and 4.6 assists per game. She is an all-around player who has a great understanding of the game. She is extremely quick and very sly, which makes her very good on defense. She runs the court so well that it enables her to score in transition. She should surpass 2,000 career points this season.

Named first-team All-Ohio in Division III a season ago with 19.4 points, four rebounds, 3.6 assists and 3.2 steals per game. She is a tremendous athlete who can score from anywhere on the court. Her athleticism puts her game on a level that is tough to match both offensively and defensively.

Named special mention All-Ohio last season as a freshman and opened this season showing why, as she scored 29 points and grabbed 12 rebounds for a double-double and then backed it up with a triple-double in the next game, scoring 32 points with 13 rebounds and 10 steals. Has scored 30 or more in three of the team’s first five games. She is a great scorer off the dribble but can also shoot from the perimeter. She is an excellent rebounder and shot blocker from the guard spot.

Named the Division II Central Ohio player of the year, conference player of the year and second-team All-Ohio last season with 14 points and 6.9 rebounds per game. She can play either of the wing spots and stands out with how she can attack in transition. She holds multiple Division I college offers.

After missing last season with an ankle injury, she made up for lost time by scoring a total of 56 points in the first two games this season. Sole can score at all three levels, has great court vision, can rebound from the guard position, and is an all-out competitor. Sole makes her teammates better and ignites the high-level pace Princeton plays. Her work ethic separates her from most student-athletes on and off the floor in both the classroom and the basketball court.