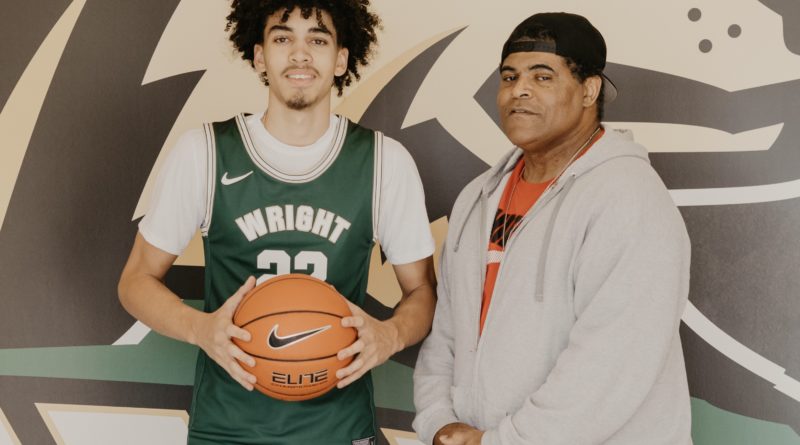 By Aaron Blankenship | Photos courtesy of the Carter family

Drey Carter found himself facing the most gut-wrenching decision of his young life on Nov. 24, the day of Westerville South’s season opener.

Just a day after Wayne Carter died after falling ill with COVID-19, the 17-year-old Drey had to decide whether he was going to play basketball or take time off to grieve the death of his beloved father.

The senior chose to play that night in honor of Wayne, and he made his entire family and team proud, scoring a game-high 18 points to lead South to a 74-53 victory over visiting Northland.

“It’s hard looking at the stands and knowing that my dad would be there if he could, and I considered sitting that first one out,” Drey said. “But I know that he would want me to go out there and put on a show, and so I did it for him.

“I miss him, and it definitely hurts not having him with me anymore. But he wants me to continue to grind, and that game — and everything else I do from here on out — is in honor of my dad.”

Inspired by his father, Carter has averaged 15 points, seven rebounds and five assists per game while leading the Wildcats to a 5-0 start.

The 6-foot-8 wing had 13 points to help South defeat Westerville North 45-43 on Dec. 10 to improve to 3-0 in the Ohio Capital Conference-Capital Division.

“Drey shoots the ball well, and he’s the first player I’ve ever had who has made over 45 percent of his shots from behind the arc three years in a row,” said coach Ed Calo, who’s in his 35th season at the helm of the program. “He’s a stat stuffer, but he’s also an unselfish player who lets the game come to him.

“Drey takes a lot of pride in his passing, and he’s a great decision-maker who hits the open man and gets his teammates involved.”

Senior wing Abdulai Jalloh said Carter is respected by everyone within the program.

“Drey’s a great leader and a role model who we all look up to,” Jalloh said. “He’s an amazing player, and I’ve never met a harder worker than Drey. His work ethic is just relentless.

“He’s also the best teammate you can ask for. Drey treats everyone the same, from varsity starters to the freshmen. Drey brings our entire team together, and we’re like family because of him.”

Carter credits his elite playing abilities and strong leadership skills to the teachings of his father, who got Drey involved in basketball at the age of 4 and motivated him to constantly improve.

Throughout the years, Wayne hired top-level personal trainers and coaches to work with his son, and drove Drey to practices and games for a variety of travel basketball teams.

And when Drey reached high school, Wayne moved from Bellefontaine to Westerville with his son, so that he could attend South and continue to improve under the guidance of Calo and his staff.

“My dad worked hard to lay the foundation for the player and person I am today,” Drey said. “He made a lot of sacrifices for me, spending a lot of time training me in the gym and driving me to games. My dad’s goal was always to get me to a better position, and he always knew the destination to help take my game to a higher level was Westerville South.”

Success didn’t come easily for Carter once he arrived in Westerville, as he wasn’t even a starter for South’s freshman squad.

But after Carter grew three inches and worked hard to improve his jump shot during the offseason, he moved into the varsity team’s starting lineup as a 6-4 sophomore.

Carter continued to improve his all-around skills and grew two more inches heading into his junior season, during which he averaged 14.5 points and was first-team all-league, second-team all-district and honorable mention all-state.

With Carter making just under 50 percent of his 3-pointers last season, South finished 11-3 overall and shared the OCC-Capital title with Worthington Kilbourne with an 8-2 league mark.

“I was average my freshman year until I hit a growth spurt,” said Carter, who grew two more inches heading into his senior season. “My height has been a blessing. All of my family was shocked when I grew to be 6-8 because my dad was 6-5, and I became the tallest guy in my family.”

Carter worked relentlessly to improve his all-around basketball skills during the summer.

On a typical day, he would attend practice with teammates in the morning, then spend 30 to 60 minutes shooting before training with former pro Cody Ballard for 90 to 120 minutes, doing agility and strength workouts for 45 minutes and going to a park to work on improving his ball-handling and shooting.

“I’m definitely a grinder who is always looking to improve upon all aspects of my game and my life,” Carter said. “I’m a big believer in hard work, and I love basketball.”

A total of 15 college programs offered Carter scholarships, but he made a verbal commitment to Wright State on Nov. 1 and signed a national letter of intent to play for the Raiders on Nov. 10.

“I immediately fell in love with the coaches and entire basketball program at Wright State, and it was the program that fit me the most,” Carter said.

Wayne and Teresa Carter attended their son’s signing ceremony, where they both expressed their appreciation of Drey.

“I’m so thankful for both of my parents and the way they raised me,” Drey said. “I’m really grateful that my dad was able to be there for my signing because he was so excited to see that all of the hard work was paying off. He told me he was so proud of me and happy for me, and that means so much to me.”

Drey never could have imagined on that special day that his father would pass away less than two weeks later.

“I lost my dad when I was 50 and it was devastating, so I can’t imagine what Drey is going through,” Calo said. “Obviously, he’s depressed that his father will never get to see him graduate and play in college, but he’s handled it better than anyone could have expected him to, and he’s doing a tremendous job of leading our team.”

Carter has continued to make his family proud with his academic achievements as well, as he’s maintained a 3.6 cumulative grade-point average. He is interested in majoring in architectural design, and he hopes to play basketball at a professional level after graduating from Wright State.

Drey said he misses his father every day but he is determined to continue down the path his dad set for him.

“My dad was at every game, and he knew my game better than anyone else, so the hardest part is knowing that he’s no longer here to share his knowledge with me,” Drey said. “He gave me the best feedback, and he was always honest with me, whether I wanted to hear it or not, and that really helped me improve.

“It’s hard to not be able to share those moments and experiences with him, but I’m thankful that he laid the foundation for me, and I’m happy to continue to fulfill my own dreams and his dreams. The thing that brings me peace and joy is knowing that I made him proud.”