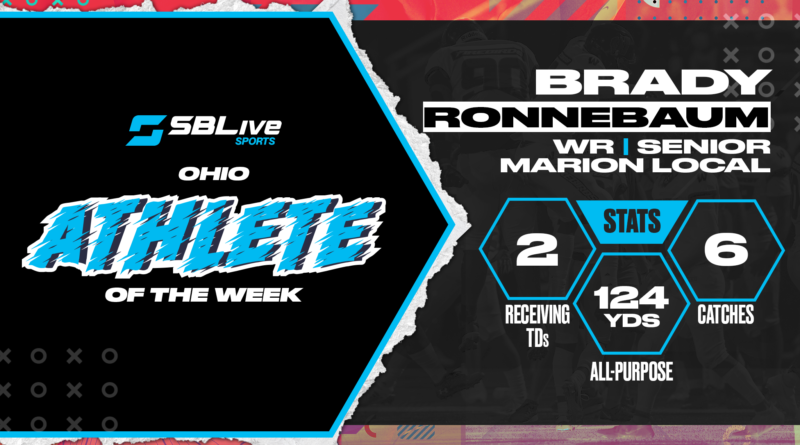 The senior led his team in all-purpose yards with 124 yards on six receptions. He also had two touchdowns on 19- and 51-yard receptions in Marion Local’s 42-7 win against Newark Catholic.

Ronnebaum received 53.49% of the vote, beating out Chardon LB Brody Dotson who finished second with 44.5%. There were over 18,000 votes tallied this week!

Burns had two goals and two assists in Upper Arlington’s 7-5 win over Berlin. He has 14 goals this season.

Borer led her team in scoring with 24 points as Whitmer outlasted Millbury Lake in overtime, 65-62.

Dozer had 27 points, 10 rebounds, three assists and two steals in a 60-49 win over Licking Heights. The senior also had 14 points as Bloom-Carroll defeated Circleville 60-28.

The junior led a tough defense with eight tackles, including 3.5 tackles for a loss of 23 yards and 2.5 sacks.

Harris led all scorers with 25 points and grabbed five rebounds in the fourth quarter to extend the Spartans’ lead against Orange.

Hudson was a prominent leader on defense with 10 tackles (7 solo, 3 assisted) and an interception return for 32 yards.

The senior finished with 69 all-purpose yards, including 45 rushing yards and a 24-yard kickoff return. Osborne also scored Versailles’ final touchdown of the game.

Trampler led his team in rushing yards with 117 yards on 19 carries and seven tackles.

The senior scored a game-high 26 points and grabbed 13 rebounds to help lead the Bulldogs to a 59-39 victory over Aurora.