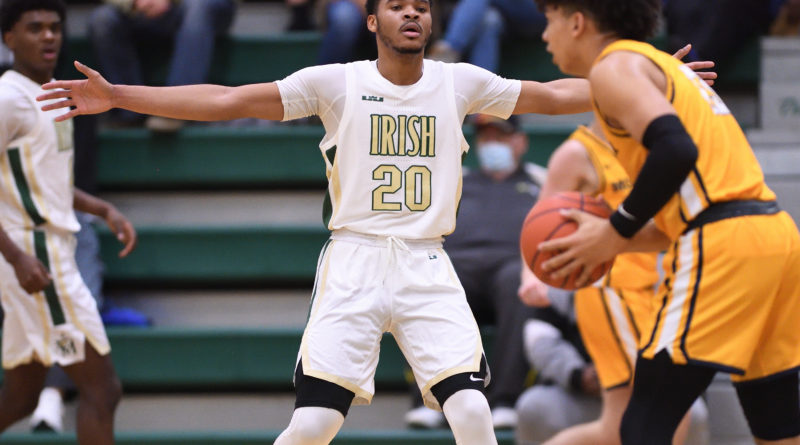 AKRON, Ohio — If defense does indeed win championships, the performance St. Vincent-St. Mary put together Saturday in a 49-26 win over Archbishop Moeller is the kind that might allow the Fighting Irish to hoist another banner when the season is over.

St. Vincent-St. Mary (1-2) was aggressive from the jump on the defensive end, holding Moeller to just a single basket in the first quarter and eight points total in the first half.

“To come out and defend a disciplined team and give up only eight points in the first half, that’s big,” STVM coach Dru Joyce said. “I was really proud of the defensive effort.”

While the defense was stopping Moeller (4-2), the offense was getting the ball to the basket in transition after turnovers and also in half-court sets to jump out to a 19-2 lead after the first quarter and a 29-8 lead at the half.

While the 3-point shot wasn’t falling, the Fighting Irish hit 10 of their 12 shots from inside the arc in the half.

“I am a firm believer that the team who gets the ball to the front of the rim the most, wins,” Joyce said. “I know in this era of 3-point ball, that isn’t always taught, but that’s how we teach it.”

One of the players who took advantage of getting to the rim was guard Ramor Pryor.

He scored 14 points and did not miss a shot he took from inside the 3-point line and was a blur in transition, repeatedly turning up the floor and beating the Moeller defenders for easy buckets.

“That’s a really big part of my game is I can run the floor,” Pryor said. “That’s what I do when my shots aren’t falling.”

The Fighting Irish were led offensively by Illinois signee Sencire Harris with 20 points on 8-of-11 shooting, including two of STVM’s three 3-pointers in the game.

But he was also a leader on the defensive end guarding Penn State commit Evan Mahaffey, who entered averaging 17.8 points per game this season.

Harris stifled his future Big Ten opponent, limiting Mahaffey to only four points, with two of those on a dunk off a turnover when he was all alone in the paint.

“I am the type of player to say ‘he isn’t going to score,’” Harris said. “I looked at him like, I’m not giving him anything, but I’m going to get mine.”

Joyce was happy with his senior for taking on the responsibility of guarding Mahaffey, seeing as how the knock on Harris when he arrived at STVM was that he wasn’t a good defender. The coach explained that to play the STVM way, Harris would need to step up on the defensive end.

“Playing defense is want-to,” Joyce said. “Over the years he has gotten better and better. He took the challenge, and that’s what you want guys to do.”

The win and defensive effort were welcome sights for STVM after giving up 83 points at Pickerington North in the Nike All-Ohio hoops showcase and 71 points to Sierra Canyon at Staples Center in the Chosen 1’s Invitational.

“We really needed a win bad,” Joyce said. “We looked like we shouldn’t have been on TV last weekend.”

The players heard the coaches loud and clear about the defensive effort in those first two games and talked about it early in the week during a team meeting.

That was followed by a practice where the players let out their frustration from the start of the season and got after it on the floor.

“Everybody just competed and was mad,” Pryor said. “That just sparked a fire today. We had to play with a lot of energy, and that’s what we did.”

The players felt a difference after Saturday’s win and believe the team is starting to turn a corner.

“The first two games were a struggle, and we weren’t a team,” Harris said.  “I think today, it just clicked. This is just the start of us being a growing team.”

Their coach agrees but also believes the defending Division II state champions are a work in progress.

“We have a lot of growth, yet we aren’t there,” Joyce said. “We took a big step forward, but we still have a lot of work we can do.”