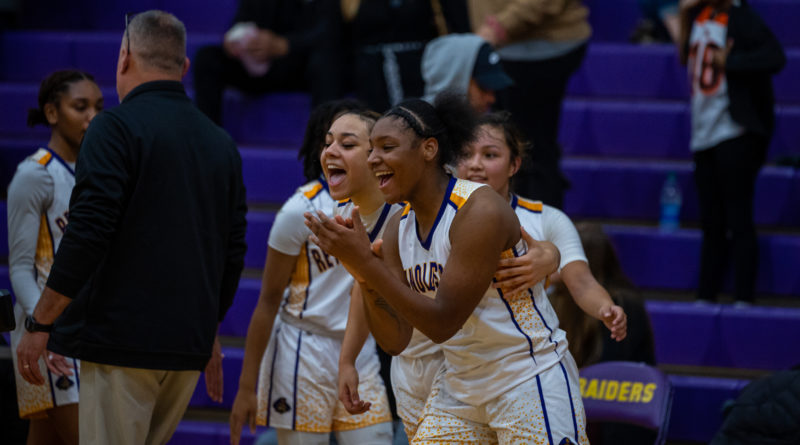 Miller, a Wright State recruit, is not only the Raiders’ best ball-handler and assist leader, she’s also a capable scorer and key defender for Reynoldsburg, which is seeking its first league title since 2017.

But senior guard Trinity Ramos stepped in to capably substitute at point guard, and the Raiders used a balanced scoring attack and swarming defense to rout the defending OCC-Buckeye champions 65-36.

“When Makiya went down, I was very worried, because we were out of sorts there for a while,” Purtell said. “Makiya usually plays 32 minutes a game, and she runs the point for us in practice and in games, so we had to make some big adjustments.

“But we have a lot of seniors (five) on this team, who have been in a lot of big games before, and they know how to react when we face adversity. Trinity is usually our No. 2, but she did a good job of running the point, and this was a great team effort and a huge league win.”

Perry, an Ohio State recruit, made three of her first four shots, including two 3-pointers, to score eight of the Raiders’ 10 first-quarter points.

“Our team is very versatile with a lot of good players, so whoever is hot gets the ball,” Perry said. “My shots were falling early, and then Imarianah and Sam got hot, so we got the ball in their hands.

“We have some good individuals, but it’s not about me-ball; it’s about team-ball, and it doesn’t matter who scores as long as our team wins.”

Savoy, who matched her single-game, career-high for points, also had 10 rebounds. She scored a team-high seven points in the second quarter to help Reynoldsburg take a 27-19 halftime lead.

“Some nights I don’t have it like this and I defer to my teammates, but my team needed me tonight, and I was able to buckle down and play well offensively and defensively,” Savoy said. “Our team is working hard toward our goal of making it to the state tournament, but this is the best team we’ve beaten so far, so this was a good step toward that goal.”

The Raiders held just a 42-32 lead at the end of the third quarter, but they were able to blow the game open with intense full-court pressure to force Newark into six turnovers in the fourth quarter.

“I have a lot of respect for Newark because they are a good team and this was a hard-fought game,” Purtell said. “We practice this way, using a full-court press, to try to trap and steal the ball, and it was very effective in the fourth quarter.”

“Reynoldsburg does a great job of playing physical and applying defensive pressure all over the court, and we didn’t respond to it as well as we needed to,” Newark coach Jack Eifert said. “This is a tough loss, but we had a tough loss to Purcell Marian (57-34 on Nov. 28) earlier in the season and bounced back to win our next couple of games, including a (league) win over Pickerington Central (59-49 on Dec. 3). So we’ve shown that we can bounce back already, and I am confident we will do it again.”

With Perry guarding her most of the game, Maddie Vejsicky, a Virginia Tech recruit, scored only five points for the Wildcats, and missed her last 11 field-goal attempts.

Stare, a Cincinnati recruit, scored only three points in the second half, including none in the fourth quarter.

“Jamiona Ross didn’t practice all week because she was sick, and we weren’t sure what she was going to be able to give us tonight, but she guarded Stare well all game,” Purtell said. “(Ramos) is our unsung hero. She isn’t very big, but she rebounds and scraps the entire game.

“We have the three players who are Division I college recruits doing a great job for us, but we have a lot of other good athletes playing key roles for us, and it really showed in tonight’s performance.”