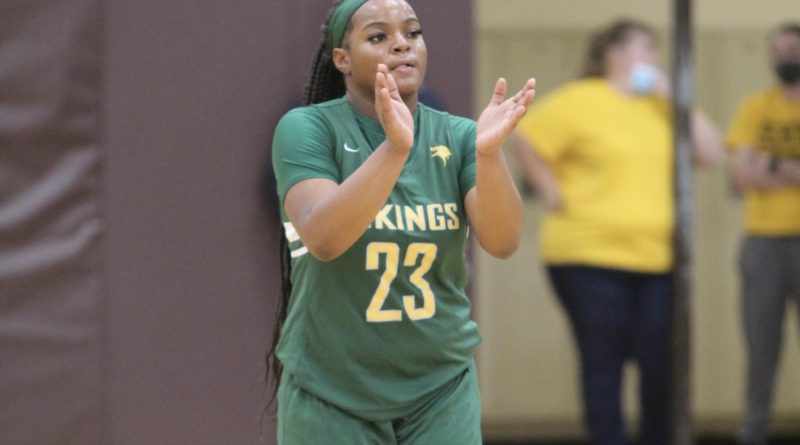 When Brianna Hamilton stepped onto the basketball court for Northland’s season opener against Whetstone, she was momentarily flooded with intense emotions.

Hamilton, though, walked off the court mostly feeling blessed and grateful after she scored a game-high 24 points to lead the Vikings to a 95-7 blowout victory in their City League-North Division opener Nov. 30.

“It feels like I’ve hit the lottery — to be healthy again after everything I’ve been through,” Hamilton said. “When I was rehabbing my knees, there were times when I battled depression. When I was at my lowest point, I had days where I hated basketball. I was anxious to see how I would play. Now that there’s finally nothing wrong with me, it feels great to have the brace off my knee and be able to play this way again.”

Northland coach Jay Bee Bethea said Hamilton is a versatile weapon, capable of playing all five positions equally well depending on what the Vikings need in any given game.

“Brianna has a high basketball IQ, and she’s athletic enough to play anywhere we need her,” Bethea said. “When she was limited physically, with her knee injury last season, she played as a center, and she did well there. This year, we have her starting at (small forward) and also playing a lot of (power forward) because she can score and defend inside and outside. But she’s also our backup point guard, who handles the ball well and can hit the 3-ball.”

“Brianna and I are very goofy, and we like to play around 24/7, but our entire team respects her and sees her as a leader, especially the (under)classmen,” Vance said. “She’s a great competitor who has a lot of energy and goes very hard, which helps get everyone going.

“I’m very proud of her because she’s had to get through a lot of obstacles to get where she is today.”

Hamilton has had to travel a long, painful road to reach her senior season. Hamilton experienced her first major injury in the summer of 2019 when she unknowingly tore the ACL and meniscus in her left knee after landing awkwardly after scoring a layup in practice.

Hamilton had to be carried off the court, but after icing her knee and taking Ibuprofen, she continued playing travel basketball for three more months before an MRI finally revealed the extent of her injury.

“I heard a pop in my knee and I was in excruciating pain, but I thought I had a major sprain, so I just kept playing on it,” Hamilton said. “I didn’t get my knee looked at again until it was hurting during volleyball season, and when they told me I needed emergency surgery three days later, I was in shock because I had just played basketball all summer.”

While recovering from her knee surgery, Hamilton missed her entire sophomore basketball season.

“I was an emotional wreck because it didn’t seem fair,” Hamilton said. “I was very heartbroken and mad because I never thought something like this would happen to me.

“I felt helpless for the first three months after surgery because my left leg looked like a twig, and it was so painful. I had to learn to walk again and get my strength back slowly. I was in a make-or-break situation, and there was no way I was going to give up and let that injury break me.”

‘All of the rehab all over again’

Hamilton returned in time to play travel basketball over the summer. But while trying to save the ball from going out of bounds during a game in September 2020, Hamilton tore the ACL in her right knee.

“I felt like I was drowning,” Hamilton said. “I wanted to quit playing basketball, because I knew how difficult it was to come back from this kind of injury. I had to question whether I really love this sport enough to go through another surgery and all of the rehab all over again. But I have a great support system around me, and all of the people in my life gave me the encouragement and support I needed to keep going.”

Hamilton postponed her surgery until March 9 so she could play center for the Vikings, who went on to finish 7-4 overall during the 2020-21 season, which was shortened due to the COVID-19 pandemic.

“I worked hard in physical therapy to get my muscles stronger around (my knee), and I refused to miss another season,” Hamilton said. “I had to adjust my playing style. Instead of driving to the basket, I was more of a shooter from the top of the key. But by using my brace, and through the grace of God, I made it through the season without hurting myself worse, and I did some (good) things.”

While enduring yet another long, painful rehabilitation process for her surgically repaired knee, Hamilton was determined to make it back to play basketball in honor of eight loved ones who have passed away, including two uncles (Emanuel Roberts and Paul Williams), a grandfather, a grandmother and a great-grandfather.

Hamilton also is inspired by the memories of two younger cousins (Amare Smith and Amaya Street) and a close friend (Makenzi Ridley), who died before they reached adulthood.

“I keep doing my best to make my loved ones who have passed proud of me,” Hamilton said.

Hamilton also draws a lot of motivation from her older sister, Alexandria Hamilton, who plays basketball at Coppin State, a Division I school in Baltimore.

“I got to play basketball at Northland with my sister for one season, when I was a freshman and she was a senior,” Hamilton said. “Seeing Lexi play college basketball is an inspiration to me, because I feel like if my sister can do it, I can do it.

“I wouldn’t have made it this far without the support of my teammates, family and friends, because they never gave up on me. This is my senior year, and I have a point to prove to everybody.”

Despite her physical setbacks, Hamilton has received attention from college coaches, but her immediate focus is helping the Vikings challenge for City League and Division I district championships.

Northland finished second in the City League-North last season at 6-1 behind Beechcroft (7-0).

“I want to play in college, but that can wait until the end of the season,” Hamilton said. “We want to shock everybody, and we’re ready to cut down some nets and get some championship rings.”

Hamilton already has a good idea of what she’d like to do for a living once her basketball career ends.