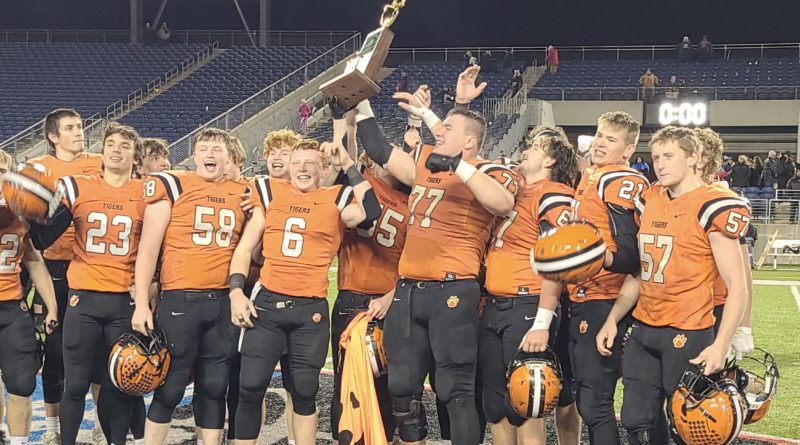 Story and photos by Ryan Isley

After losing in the regional semifinals last season to Roger Bacon, the Tigers set their sights on this season and atoning for the disappointment of a tough end in 2020.

“They decided after we lost last year in the playoffs to Roger Bacon that they were going to pay the price for success,” Versailles coach Ryan Jones said. “That’s exactly what they did.”

What Versailles (15-1) did Saturday night was jump out to an early 6-0 lead on the game’s first possession with a 15-yard touchdown run by quarterback Carson Bey.

It was the first time Kirtland had trailed in a game since the first round of the playoffs in 2019, a streak of over 1,400 minutes.

“From us putting that first point on the board, I knew from there we had it locked in,” Bey said. “We had them where we wanted the whole game.”

Bey then added a 24-yard touchdown pass to Michael Osborne early in the second quarter to give Versailles a 13-3 lead.

“We get up on them and it sets the tone for our team,” Jones said.  “Sometimes it takes them out of their game plan.”

The Tigers carried that lead into the half and then extended it to 20-3 on a 1-yard touchdown run by Jack Osborne with 3:22 left in the third quarter.

Kirtland (14-1) made it interesting with a 29-yard touchdown run by Gage Sullivan early in the fourth and then a 4-yard score by Mason Rus with under a minute to play, but Versailles recovered the onside kick to secure the win and the championship.

Bey completed 8 of his 12 passes for 129 yards and a touchdown and ran for 86 yards on 27 carries. On the defensive side of the ball, he had four tackles and an interception.

“Coming into this year with dreams crushed last year, I knew I had to step up,” Bey said. “And everyone else stepped up right beside me.”

The players stepped up because they follow the lead of their quarterback, not just on the field but off it as well.

“Even more importantly than his ability, he is a fantastic leader on and off the field,” Jones said. “He does a great job. Nobody outworks him, and he sets a great example.”

“The streak, that’s not the goal,” Kirtland coach Tiger LaVerde said. “The goal is to have fun every day with these kids, and they work as hard as they do and we compete as hard as we can. I think we competed right to the end. It didn’t happen for us today. That’s a good football team, and they deserved to win the game.”

While the Tigers started working on getting themselves in position to win a state championship once last season was over, they didn’t talk about that as the goal.

“We never once talked about winning a state championship.” Jones said. “Our goal is to focus on our system and how we do things. We talk about America never said when they made the Constitution that we are going to be the greatest country in the history of the world. They said this is our system, and it’s going to work.”

Versailles had a system. It worked. And at the end of the night, the Tigers were hoisting a state championship trophy for the first time since 2003.

“It seems like heaven on Earth right now to me,” Jones said.