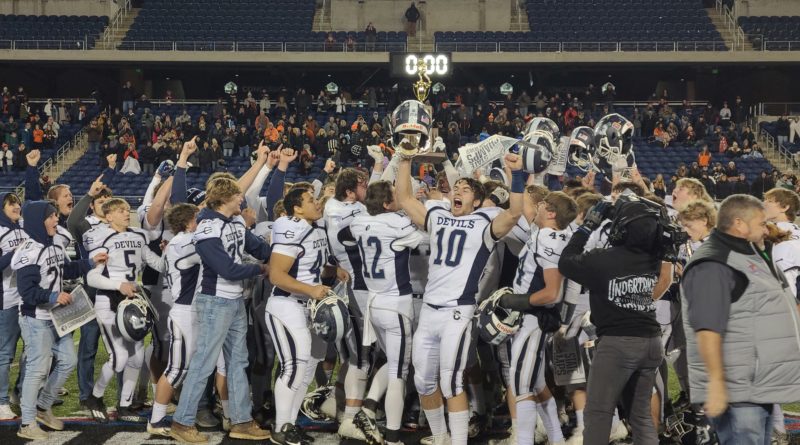 By Owen MacMillan | Photos and video by Ryan Isley

When Carey gave up the opening touchdown Saturday at Tom Benson Hall of Fame Stadium, the Blue Devils knew they had to respond.

They did so in dominant fashion, putting together a four-minute, nine-play, 76-yard drive that ended with a 1-yard touchdown run from senior running back Jordan Vallejo.

Carey coach Jonathon Mershman elected to go for two, and again Vallejo found the end zone to put the Blue Devils ahead by a point.

“If we got the two-point conversion, then it was 8-7, and then my goal was to never give them the ball back and we could win 8-7,” Mershman said. “You can’t win a game if you aren’t in the lead, so we went for the lead. And I know this team plays way better when we have the lead, because we know we are gonna drain the clock.”

That drive, and Mershman’s simple, confident philosophy, would prove to be just a sample of what was to come, as the larger and more physical Blue Devils slowly, consistently moved the chains and the clock.

Carey out-possessed Coldwater 34:34 to 13:26, preventing the Cavaliers from picking up any offensive momentum.

“If you look at these stats, they look dirty,” Mershman said. “Nobody’s over a hundred rushing yards. We only threw the ball like four times. But you know what, the biggest stat was owning the time of possession (and) keeping their offense off the field, defense making stops when they had to and the offense grinding the clock down to nothing and scoring enough points to beat ’em.”

Though no Blue Devil went over 100 yards, Vallejo and quarterback Derek Lonsway put up solid numbers on the ground.

Vallejo had 25 carries for 95 yards, while Lonsway ran the ball 21 times for 81 yards and a score of his own. Carey had six other rushers combine for 72 yards.

“(Our offensive line) does an awesome job of coming together as one, and it allows us backs to look good and open up some nice holes and make some moves out in the open field,” Lonsway said.

Vallejo and Lonsway averaged just over 3.8 and 3.9 yards per carry, respectively, but those modest gains were more than enough to satisfy Carey’s imposing offensive linemen.

“I think I speak for the rest of the line — getting those 3 yards just builds (our])confidence,” said senior guard Ashton Clauss. “We don’t care (because) if it’s 3 yards every time, we’re going to get the first down.”

“As a lineman, I take pride in those little 3-yard plays,” Korody said. “It really just wears down the defense, and when you have the momentum, you don’t feel it. You don’t get tired from a 17-play drive that takes seven minutes off the clock. It’s an awesome feeling knowing you can just dominate and control the game like that.”

Carey’s methodical offensive onslaught forced the Coldwater defense to make 97 tackles, only three of which went for a loss.

Coldwater and senior quarterback Reece Dellinger were unable to find their groove with Carey keeping them on the sideline for those extended periods.

“With me being a quarterback only, it’s tough because I have to stay loose on the sideline, then just go out there and put a good drive together,” Dellinger said. “It’s a lot to deal with.”

Even when the Cavaliers were able to get on the field, senior center Josh Kaup said the stunts and alignments of the Blue Devils’ front seven made it that much harder to find answers.

“They kept changing up certain things on the D line,” Kaup said. “So every time we’d get out there, we’d be expecting one thing, then if they changed it that made it hard because we’d only see them (for) three, four plays and then we’re back on defense for eight or nine minutes.”

While the best defense can be a good offense, it doesn’t hurt if the defense is great in its own right.

Carey had two takeaways in the first half, an interception by senior Anthony Bell and a strip-sack fumble forced by senior Lance Woods, and scored 15 points off those turnovers.

Carey was led in total tackles with five each by sophomore Carter Smiley, Woods and Lonsway, who plays safety along with quarterback.

Coldwater did show enough flashes to remain within striking distance, as Dellinger went 13 for 31 for 205 passing yards and a touchdown along with his interception.

While this was Coldwater’s eighth title game appearance since 2010, it was Carey’s second in school history. The Blue Devils had not reached the semifinals since 1994.

When asked if they were leaving Carey football better than they found it, the Blue Devils’ five captains just laughed. Mershman spoke up.

“That’s an easy answer, (and) I’ll answer it for them — yes. This group really did show every group coming up how to lead, and how to do things right. That’s just the way these guys were from the year they were freshman all the way through.”