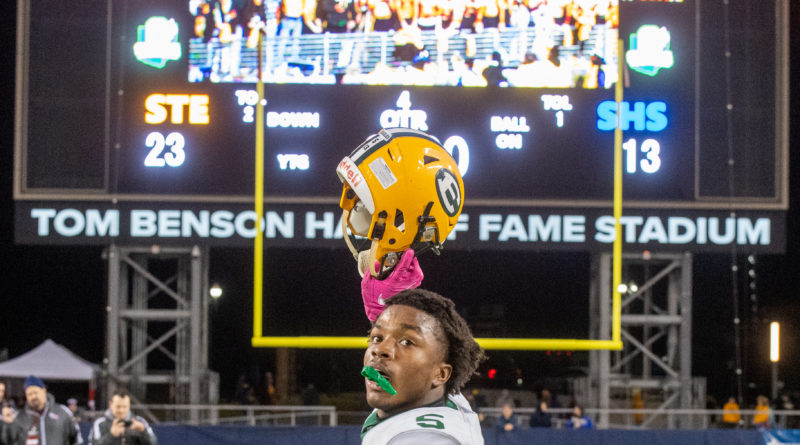 CANTON, Ohio — When St. Edward needed a complete team performance the most, the Eagles delivered for a 23-13 win over Springfield in the OHSAA Division I state championship game Friday night.

“The defense played great, our special teams blocked kicks, and our offense got the yards when we needed it,” St. Edward coach Tom Lombardo said. “It was a total team effort.”

The defense was in bend-but-don’t-break mode for most of the game. Despite giving up 349 yards passing to Springfield quarterback Te’Sean Smoot, the defense intercepted two passes and held the Wildcats to negative yards rushing.

“They are resilient, that’s for sure,” Lombardo said. “We have been stout against the run all year long, and tonight they couldn’t really run the football. They made yards passing, but we made enough plays when we needed one.”

One of those plays came at the hands of senior defensive back Hayden Rice on the opening drive of the second half.

With St. Edward (15-1) holding on to the 16-7 lead the Eagles had at halftime, Springfield took the second-half kickoff and drove down the field.

On the 15th play of the drive, Smoot dropped back to pass and let the ball fly down the right side. Rice stepped in front of the pass at the 2-yard-line and intercepted it to preserve the two-score lead.

“Coach always preaches to win the red zone,” Rice said. “I got the pick, and it gave our team the momentum.”

That was one of three Springfield drives that made it to the red zone but did not result in points.

“We have talked about the importance of the red zone and we proved it today,” Lombardo said. “You can give up yards, but if you don’t give up points, you have a chance to win.”

The offense amassed 256 total yards, with Danny Enovitch carrying the bulk of the load. The 5-foot-11 senior running back carried the ball 32 times for 210 yards and two touchdowns.

“I give all the credit to the O-Line,” Enovitch said. “They were opening beautiful holes all night, and I couldn’t have done it without them.”

Behind that offensive line, quarterback Christian Ramos completed 8 of his 12 pass attempts for 86 yards, including a 19-yard touchdown pass to Connor Goodall. He also had 14 rush attempts for 60 yards.

The 23 points represents the most that an offense has scored all season against a stingy Springfield defense that finished with seven shutouts and held three other opponents to seven points or less.

The championship is the fifth in school history for St. Edward and the first since 2018, and the players were emotional as soon as the game ended.

“Indescribable,” Enovitch said. “It’s absolutely unbelievable. These guys mean the world to me. They are my brothers for life, and we will never forget this.”

When the dust settled, the Eagles were holding up the state championship trophy and taking photos at midfield — as a team, just the way they won it.