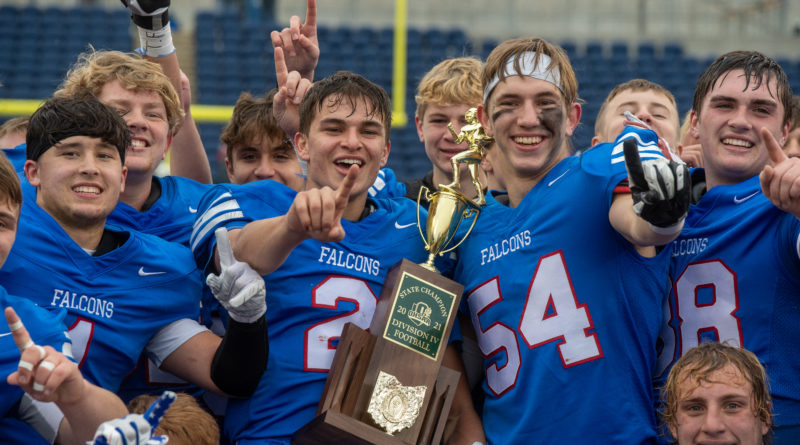 Those three words will go down in Clinton-Massie football lore as the play call on the two-point conversion that finished off one of the greatest comebacks in state championship history, sending Clinton-Massie to a 29-28 win over Ursuline for the Division IV state title Friday.

Quarterback Kody Zantene took the snap and pitched the ball to running back Carson Van Hoose, who took it around the right side and into the end zone for the score.

“It all comes down to O-line. They made a good block,” Van Hoose said. “Carter Frank kicked out the corner and then it was just wide open and allowed me to go in.”

But to get to the two-point conversion, Clinton-Massie (14-1) had to first score a touchdown while trailing 28-21 in the game’s final minute. It came down to a fourth-down play from the Ursuline 1-yard-line.

Clinton-Massie pulled out a play they had not yet shown Friday.

Offensive coordinator Jeskee Zantene put the ball in the hands of his quarterback (and son) on a bootleg right. The younger Zantene faked the handoff and then turned around to see nothing but green turf and the end zone ahead of him for the touchdown.

“We have had that in our back pocket for a long time,” Kody Zantene said. “Everybody has been saying all we do is smash-mouth up the middle, and my dad drew that play up and it worked. I have to find him and tell him I love him.”

With the touchdown in hand, it was time for Clinton-Massie to make the ultimate decision — play for the win or try to tie the game and send it to overtime. But it wasn’t much of a decision.

“We called a timeout and asked the seniors, ‘Guys, what do you want to do,’” Clinton-Massie coach Dan McSurley said. “They said, ‘We want to win it.’”

McSurley sent the offense back on the field, and moments later, Van Hoose was running through the end zone with the football and the lead.

It wasn’t long before that score that it looked grim for the Falcons, however.

With 5:23 left in the third quarter, Ursuline quarterback Brady Shannon threw a 29-yard touchdown pass to Carter Euton on a fourth-down play to give the Fighting Irish what seemed to be an insurmountable 28-7 lead.

But the Falcons were not ready to concede, as Zantene scored on a 49-yard quarterback keeper on the following possession.

After a defensive stop, Clinton-Massie drove to the Ursuline 1-yard-line. The Falcons fumbled the ball, but a fortuitous bounce ended up in the arms of offensive lineman Garrett Vance in the end zone for a touchdown.

The defense forced another Ursuline punt after that, and the offense got the ball back at its own 23 with 7:49 left to play and trailing by a touchdown.

In those possessions, the defense allowed Ursuline to gain just 18 yards of offense on 10 plays and take only 5:41 off the clock.

“I have to give it up to the defense,” McSurley said. “They made some crucial stops and had some good pressure on the quarterback.”

The offense went to work methodically and went on a drive that took 13 plays. Following the last play, McSurley was asking his seniors what they wanted to do after the touchdown.

Their answer was simple.