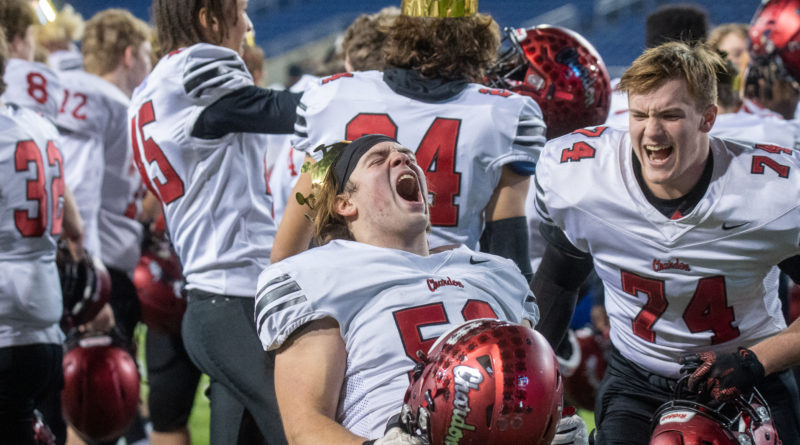 CANTON, Ohio — When Chardon found itself tied 14-14 late in the fourth quarter, the Hilltoppers leaned on their stingy defense and deadly rushing attack to carry them to the decisive touchdown and their second straight Division III state championship.

Chardon held Badin to a three-play, minus-16-yard drive and forced a short punt. With the ball back and the lead for the taking, the Hilltoppers ran the ball four times for 29 yards, capped by a game-winning 2-yard touchdown by senior running back Sean Carr.

“We were confident going on (offense),” Carr said. “We knew that in that situation, we had worked hard enough to succeed. To just be able to go out and do it is amazing.”

Chardon won 21-14 at Tom Benson Hall of Fame Stadium to become the first team in OHSAA history to finish a season 16-0 while taking its second consecutive state championship.

Coach Mitch Hewitt gave all credit to his players, saying he hadn’t expected this level of success from a team that returned few starters.

“It’s a testament to these kids,” Hewitt said. “I underestimated our kids this year, and maybe they could sense that in me. But we started to speak it into being.”

Chardon and Badin both played stellar defense, as evidenced by eight punts each for a combined 503 yards.

Chardon opened the game strong by stopping Hamilton Badin (14-1) dead in its tracks, then the Hilltoppers scored on just their third play from scrimmage when junior quarterback Alex Henry hit senior wideout Nathanael Sulka for a 36-yard touchdown.

It took the Rams the rest of the half to respond offensively, but their defense held and Badin finished the half with a touchdown drive to tie the game. That drive was capped off by a 2-yard touchdown from running back Jack Walsh.

The second half started much the same, as Chardon put together a seven-play, 74-yard drive to again score on its opening possession of the half.

Sophomore running back Andrew (AJ) Bruce got his first two carries of the night on that drive and made them count, taking them 14 yards on the opening play of the half, and then 27 yards for a touchdown to cap off the drive.

Bruce would finish as the leading rusher for Chardon, as he went for 88 yards and a touchdown on just seven carries (12.6 yard average). He was used effectively on jet sweeps to keep the Badin defense on edge.

“AJ is a talented kid, and he’s a kid who needs the ball in his hands,” Hewitt said. “(Badin has) a devastating front seven. So we had to find ways to get our playmakers the ball.”

Carr was the Hilltoppers’ leading rusher all season, and while he gave the credit to his offensive line, Sulka said, “We don’t get here without (Carr).”

The Rams’ defense played well against Chardon’s powerful rushing attack, but the change-up between Carr, Henry and Bruce allowed the Hilltoppers to pick up yards in chunks.

“They had a really good offense. They were a hard-nosed running team,” said senior linebacker Ely Emmons. “But we have played teams like that all year, and we played really good. We came out hitting hard and they hit back. But we had a few plays where we would change formation and we would make a mistake, and they would capitalize on it.”

Badin responded to Bruce’s touchdown with its own long drive, capping off a 72-yard drive with a 6-yard touchdown run by junior Carter Russo, who was set up by carries of 35 and 12 yards by Walsh, as well as a Walsh reception of 11 yards from junior quarterback Dominic Pace.

Walsh led the Badin offense, racking up 96 yards and a touchdown on 27 carries and 16 yards on two receptions.

After that Badin scoring drive, the Chardon defense knuckled down, forcing three-and-outs and negative yardage on the next four Badin possessions. The final Badin possession saw Pate picked off by junior linebacker Heath Fetchick to end the game.

“We mixed up some formations, and once they scored again we were able to answer,” Badin coach Nick Yordy said. “But I mean, we made adjustments, (then) they made adjustments. It was a tough game. We knew their defense was good, and they threw some things at us. They were really good up front, and I think that is where they beat us, to be honest.”

The Chardon defense was led by senior linebackers Brody Dotson and Christian Hall with 11 tackles each. Dotson also led the team with tackles for loss with 2.5 and assisted on a sack.

Several Badin players commented on the physicality and aggressiveness of Chardon’s team on both sides of the ball.

On a team with many first-year starters, Sulka’s 46 career starts and championship game experience provided an emotional center and leadership for the Hilltoppers.

“(On defense) we’re just constantly encouraging each other and getting on each other to play faster, play more violent,” Sulka said. “We will tell each other, ‘this is a stop right here, three and out, they aren’t getting past the 40.’ Whatever the situation, we set a goal, and we achieved the goal.”

Hewitt and a few of his players were emotional when talking about their love for this team, their school and the city of Chardon.

“I took it in a couple of times,” Carr said. “It was awesome, that atmosphere. It’s just crazy that people can get together like that and support something.”