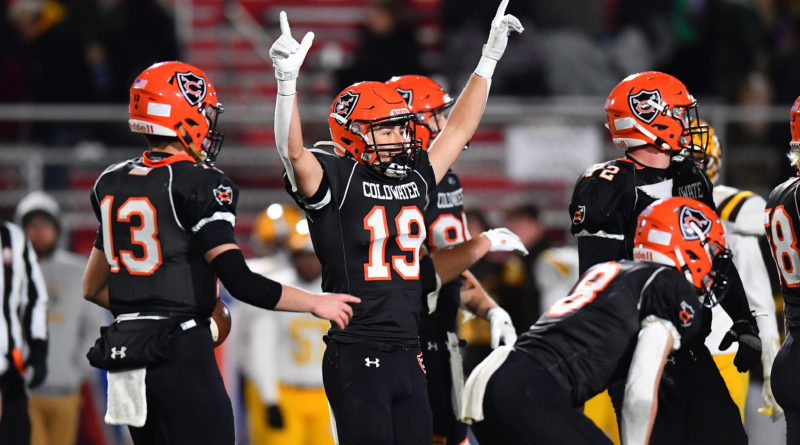 From the hot and humid two-a-days in August to the grind of a 10-week schedule through the grueling 448-team playoffs, it all comes down to this.

This weekend is what every high school football player in Ohio dreams of. Win or loss, careers will end, champions will be crowned, and the range of emotions will be as wide as an ocean.

Three days, seven games, seven champions at Tom Benson Hall of Fame Stadium in Canton. Let’s go through them all in the order they’ll be played.

Winton Woods was never supposed to be here. At the beginning of the postseason, the Warriors were a vulnerable home team that could go home in the first round. And if they did advance, they would need some luck to get by Kings. Well, they pulled the upset, and handily. Then they did it again against La Salle, then Piqua, then Green to make it five straight double-digit postseason wins as a No. 7 seed. Hoban has to be considered the heavy favorite in Canton, expected to win its fourth state title in five seasons behind Lamar Sperling’s otherworldly playoff run. But these past five weeks, Winton Woods has been turning expectations on their heads. Can they do it one more time?

In a division filled with parity and surprises, Clinton-Massie weathered the storm and will return to its first state championship game since 2017. After the 2019 season, Ursuline had fallen on hard times, putting up four consecutive seasons with a losing record, a combined 8-32 during that stretch. Both programs fell off in recent years after being two premier programs in the middle divisions earlier this century. Regardless of who wins, both programs have repaired the foundation and are ready for future success.

From the start of the playoffs, the most likely result had these two teams meeting in the state championship. Five weeks later and the Rams and Hilltoppers did not disappoint. The path has been relatively smooth for both, with Badin allowing an average of 3.8 points per game in the playoffs, while Chardon has scored an average of 40 per game. Chardon comes in as the favorite, but with that in mind, we have seen seemingly unstoppable offenses shut down by lockdown defenses plenty this postseason.

Of the 14 teams playing for a state championship this weekend, Springfield is the only one playing for its first. And if defense is the name of the game, who better than a Wildcats team that didn’t give up a point in three straight games — twice this season. However, as Archbishop Moeller proved in the state semifinal, the Wildcats’ run defense is vulnerable. If St. Edward can control the line and the ground game, as it did in wins over Medina and Upper Arlington to get here, the Eagles will win their fifth state title in 11 years.

It’s easy to credit Newark Catholic’s easy path through Region 27 for how they ended up in the state championship game. But credit where credit is due, the Greenwave still had to play Warren JFK and still had to pull the upset of the state semifinals to get here. They are clearly the biggest underdog this weekend, with Marion Local going undefeated through the toughest small school conference in the state. Stranger things have happened. But this would be an upset on the level of Lehigh beating Duke.

Right here, folks. This is the most competitive, most balanced, most even state championship in Canton this weekend. The Cavs and Blue Devils have both shown weaknesses and the potential for off weeks throughout the season. Carey needed a fourth quarter comeback to beat a Galion team that went 4-7. Oak Hills played its closest game of the season against Coldwater that same week, despite going 0-11. That said, both teams have been playing at a high level these past five weeks. It should be the best contest of the weekend to end the season.

The grand finale in Canton will see if Kirtland can extend the nation’s longest winning streak en route to a fourth straight state title. Versailles comes in as only a slight underdog in this contest, having survived the gauntlet that is the MAC schedule. The Tigers’ only loss came to an undefeated Marion Local team by two on the road. This is the best Versailles team in school history, even better than the 2003 state champion. But Kirtland hasn’t won 55 in a row by being “just good.”