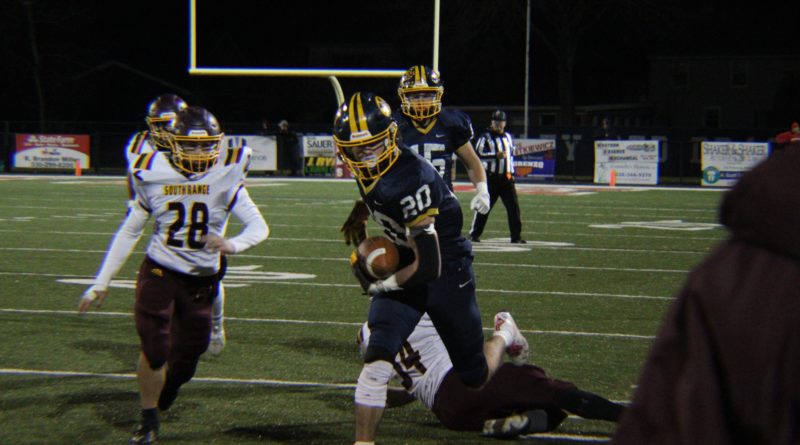 Here are some stars from the state semifinal playoff games that took place Friday and Saturday across Ohio.

Pictured above is Kirtland receiver Gage Sullivan (photo by Lowell Spencer), who had 173 yards rushing Saturday.

Enovitch carried 35 times for 180 yards and a touchdown to lead St. Edward to spoil Upper Arlington’s undefeated season and give the Eagles a shot at their fifth state championship.

Marshall scored three times for Moeller in a loss to Springfield, on 1-, 2- and 63-yard runs.

Smoot finished 19-for-24 for 285 yards and one touchdown and rushed for 114 yards and another touchdown vs. Moeller.

The junior running back rushed for 270 yards and the game-winning touchdown to edge Avon 31-24.

Colombi began disrupting West Holmes’ offense on the first drive after intercepting the ball to set up the first score of the night. Colombi grabbed his second interception of the night in the third quarter.

Fullenkamp led the Cavaliers with 104 rushing yards on 19 carries and two touchdowns.

Spikes ran for 128 yards including a 75-yard kickoff return and had two touchdowns to lead the Warriors to the Div. II state final.

The senior running back ran for all five of Ursuline’s touchdowns and finished with 259 yards (more than half of the Irish offensive total of 481 yards) on 30 carries.

Sullivan had a career-high rushing performance with 15 carries for 173 yards and two touchdowns as the Hornets defeated Ottawa-Glandorf 28-6.

The senior running back had two touchdowns, scoring both on 3-yard runs. Henry also intercepted a pass in the third quarter to return it to the Harvest Prep 28-yard line.

Bey had two touchdowns on 1- and 24-yard runs in Versailles’ semifinal win over Harvest Prep.

The senior running back had three rushing touchdowns on 2-, 8- and 15-yard runs to help Carey to a 26-13 win over New Middletown Springfield.

Canter threw two touchdown passes to surpass a season total of 30 and send his team to the state championship game in Canton.

Otte used his arm and legs to make big plays, as he scored four rushing touchdowns and another passing. Otte had 144 rushing yards by halftime and scored his fifth touchdown on an 18-yard scramble in the beginning of the third quarter.

Walsh rushed for 226 yards on 43 carries and scored both of Badin’s touchdowns vs. Granville.