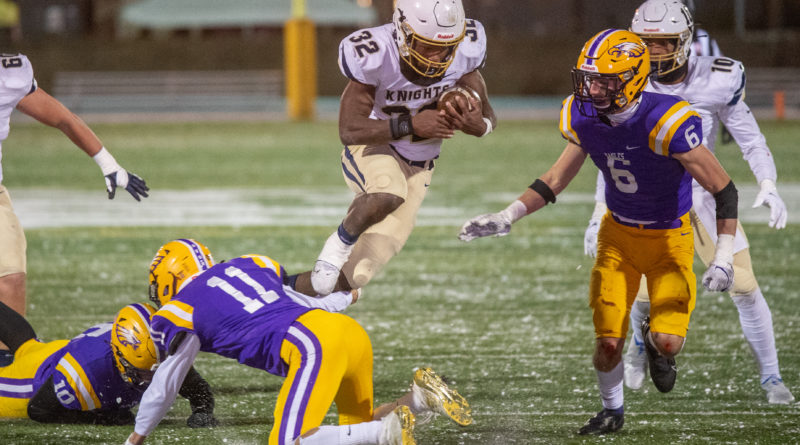 And that’s just in Divisions I and II.

Here’s a recap of all the Friday and Saturday action and championship game matchups in all seven divisions.

Cole Canter threw two touchdown passes and the Newark Catholic defense kept Warren JFK at bay all night in the snow to earn a shot at Marion Local, which cruised past Hopewell-Loudon. Marion Local’s seniors were all sophomores when they steamrolled through D-VII to win their seventh state title in nine years, and now they’ll get a chance to complete the deed again Saturday in Canton.

Coldwater will vie for its sixth state championship in the past 10 seasons after cruising past West Jefferson. Running back Isaac Fullenkamp led the Cavaliers with 104 yards rushing on 19 carries and two touchdowns. Carey is making its first state title appearance since 1994, with its last state title coming in 1975. Jordan Vallejo scored three touchdowns to lead the Blue Devils past New Middletown Springfield.

Kirtland heads to its 10th state title game in 11 years after winning its 55th consecutive game, second-most in OHSAA history. Gage Sullivan had 15 carries for 173 yards and two touchdowns to pace the Hornets. Versailles earned a shot at dethroning Kirtland with a hard-fought win over Harvest Prep. Landon Henry had an interception and then a 3-yard touchdown run to seal Versailles’ spot in the state championship game.

Clinton-Massie won the D-IV state title in 2012 and 2013, and Ursuline scored a D-V three-peat in 2008, ’09 and ’10. This year the Division IV crown will come down to those two after Clinton-Massie squeaked by Bloom-Carroll and Ursuline ran all over Port Clinton. Bloom-Carroll started the game with an 85-yard kick return, but Clinton-Massie scored a grinding 24-21 win behind Carson Vanhoose’s 143 yards on 27 carries. In the other semifinal, DeMarcus McElroy could not be stopped. He ran for all five of Ursuline’s touchdowns and 259 yards, adding a 51-yard reception as the Irish offense racked up 481 yards.

All four state semifinalists entered undefeated, but only Chardon and Badin will get a chance to finish the season unblemished. Chardon continued to blast through its competition with another running-clock victory, the Hilltoppers’ 27th win in a row. Chardon’s offensive and defensive lines controlled the game from beginning to end. It was a similar story for Badin, which hasn’t given up more than 10 points in over a month. Jack Walsh was the bell cow for Badin, rushing for 226 yards on 43 carries and both touchdowns. Chardon, the defending champ, and Badin will enter Tom Benson Hall of Fame Stadium a combined 29-0 this season.

Junior running back Lamar Sperling had a phenomenal regular season for Archbishop Hoban, but he’s gone bonkers in the playoffs. Sperling rushed for 270 yards and two touchdowns in Hoban’s win over Avon, running his postseason numbers up to 1,290 yards rushing and 20 touchdowns. He needs 187 yards rushing in the championship game to reach a 3,000-yard season. Winton Woods has been the Cinderella story of the postseason, as the No. 7-seeded Warriors have knocked off two SBLive Top 25 teams and won all of their playoff games by at least 10 points. TyRek Spikes ran for another 128 yards and the defense forced four Green turnovers Friday to punch Winton Woods’ ticket to the state championship game.

On paper, it looked like St. Edward-Upper Arlington would be a high-scoring affair while the first to 10 might win in Springfield-Archbishop Moeller, but that’s why they play the games. St. Edward’s defense and Springfield’s offense stepped up with some big plays to set up a compelling final between the Eagles, seeking their fifth state championship, and the Wildcats — who made it to the championship game for the first time. Danny Enovitch paced the St. Edward offense with 180 yards on the ground, and the defense stuffed Carson Gresock and the prolific Upper Arlington running game. Springfield quarterback Te’Sean Smoot did damage with his arm and his legs, per usual, and wide receiver Anthony Brown scored the winning touchdown on a jet sweep.