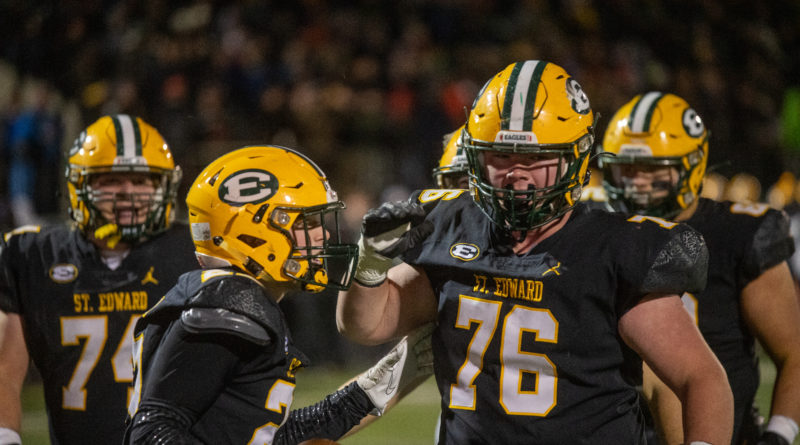 St. Edward’s defense won the Eagles a ticket to the Division I state championship game.

The Eagles held Upper Arlington running back Carson Gresock to 14 carries and 36 yards and gave up zero offensive touchdowns, as Sam Cannon’s 94-yard kickoff return was the Golden Bears’ lone touchdown in a 16-10 St. Edward win in Mansfield.

St. Edward opened the scoring with a 48-yard touchdown pass from Christian Ramos to Ray Manning toward the end of the first quarter, giving the Eagles a 7-0 lead after having a field-goal attempt blocked on their first possession.

Cannon returned the ensuing kickoff for a touchdown, and after a Zac Yoakam field goal to end the half, the Golden Bears led 10-7, the first time all season that St. Edward trailed at halftime.

St. Edward started the second half hot, punctuating an 80-yard drive with a Danny Enovitch 25-yard run to take a 14-10 lead.

Ramos quick-punted the ball to the Upper Arlington 1-yard line, and then a St. Edward safety on an attempted hook-and-ladder gave the Eagles the 16-10 win.

Enovitch carried 35 times for 180 yards and a touchdown to lead St. Edward on the road to Canton and a shot at another state championship.