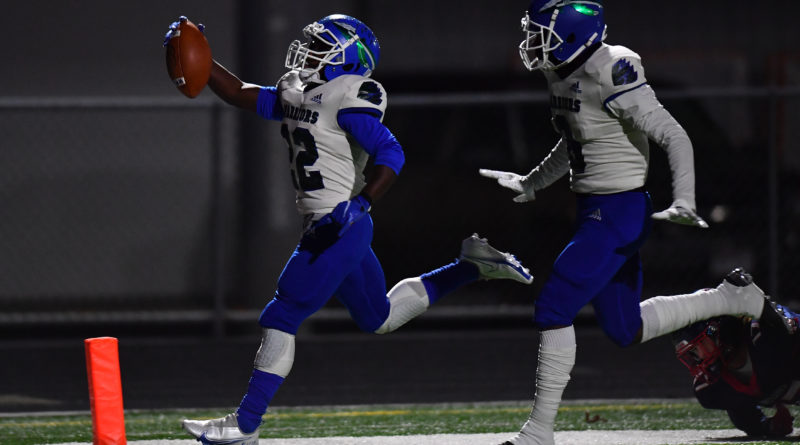 There’s still more football to be played Saturday, but the state championship games are set in Divisions I through IV.

In Canton next week, it’ll be Springfield-St. Edward in D-I, Archbishop Hoban-Winton Woods in D-II, Chardon-Badin in D-III and Clinton-Massie vs. Ursuline in D-IV.

Winton Woods (photo above by Ben Jackson) knocked off two Top 25 teams on its way to the Division II state championship game Thursday, while the other three games will be Friday.

HOW SBLIVE’S OHIO TOP 25 FARED IN THE STATE SEMIFINALS

Lakota West avenged its Week 1 loss to the Bombers.

St. Edward’s defense was the difference in getting the Eagles back to the Division I state championship game.

As dominant as Medina had been all year, that’s how badly the Bees struggled to get anything going against St. Edward.

4. Lakota West lost to Archbishop Moeller 21-17 in the regional final

In an entertaining, back-and-forth game, Lakota West got to the Moeller 35-yard line but had two deep passes fall incomplete.

St. Ignatius couldn’t keep up with Drew Allar and the Bees.

Springfield got back-to-back sacks and then a blocked punt to punch the Wildcats’ ticket to Canton next week.

Toledo Central Catholic played most of the game from behind but took the lead in overtime, only to lose after Avon answered, gambled and won.

Sam Cannon scores the lone Upper Arlington touchdown on a kickoff return as the Golden Bears struggled to sustain drives against St. Edward.

Avon caught Archbishop Hoban 24-24 in the fourth quarter, but for yet another defense in November, Hoban running back Lamar Sperling was too much.

The Division III wrecking ball that is Chardon will take on Badin for the state championship next Friday.

Pickerington Central clawed back into the game, but the Tigers were plagued by penalties in regulation and overtime.

Moeller got three touchdown runs from sophomore Jordan Marshall but fell just short of making it back to the state championship game.

13. Marysville lost to Springfield 27-0 in the regional final

Gabe Powers and Co. couldn’t get anything going on offense against Springfield’s vaunted defense.

Princeton got off to a hot start against Moeller but couldn’t sustain it.

16. Massillon Washington lost to Green 26-25 in the regional final

Green stunned Massillon with just 24 seconds left on the clock.

New Albany’s dream season came to an end in the regional semifinals.

The No. 7-seeded Winton Woods knocked out previously undefeated Piqua by scoring early and often.

20. Walsh Jesuit lost to Archbishop Hoban 49-30 in the regional final

Walsh Jesuit’s offense did its part, but the defense couldn’t stop the Hoban running game.

Mentor suffered a hard-fought loss in Round 1.

Hudson couldn’t get anything going in the second half in Round 2.

Aurora fell in one of the most exciting games of the entire season in Round 2.

Kings couldn’t overcome a slow start in Round 2.