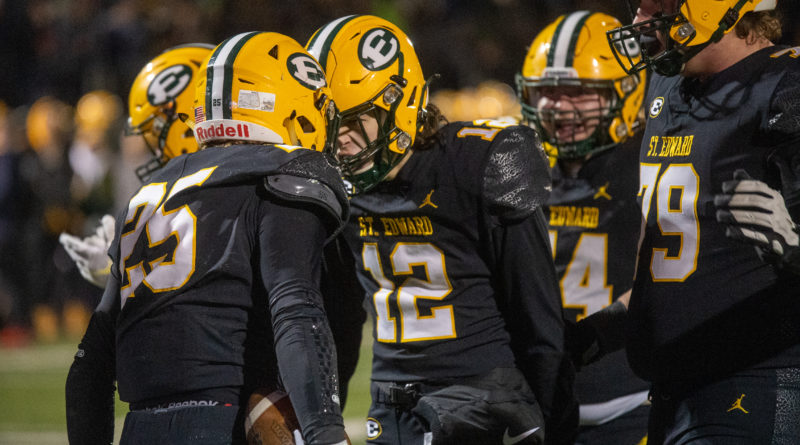 Some were locks from Day One, while several came out of nowhere to shock the Ohio high school football world.

But as we head into Thanksgiving weekend, all 28 of these teams just need two more wins to go from regional champion to state champion.

Let’s break down the state semifinals for all seven divisions.

The state championship game next week should be Marion Local and Warren JFK. No disrespect to Hopewell-Loudon and Newark Catholic, as both teams have had incredible seasons, continuing to build their way up from being no-name programs as recent as four years ago. Marion Local’s seniors were all sophomores when they steamrolled through D-VII to win their seventh state title in nine years. JFK’s juniors would like to return to the state championship like they did last year. It would be a real shocker if the Flyers and Eagles were not playing next weekend.

By all measures, this was a down year for a Coldwater program that has won five state championships in the past nine seasons. Sure, the Cavaliers were going to make a deep run in the postseason like they always do, but another state title was always considered a long shot. Then the upsets came in droves. Liberty Center beat undefeated Columbus Grove. Then the Tigers knocked off the state favorite Archbold. Then on the other side of the state, West Jefferson upset Fort Frye. The Cavs still must win two more, but their path is brighter than what was ever expected.

Last week, I said if anyone was going to end the nation’s longest active winning streak, it would be South Range. Well, South Range scored 15 against Kirtland, which is the most any team had scored since early October, but it wasn’t enough. The Hornets aren’t a lock to win a fourth straight state championship by any stretch of the imagination. O-G and Versailles came this far after facing two of the toughest schedules in all of D-V.  That said, until someone proves it can compete with Kirtland, the Hornets are the team to beat.

This is the only division that does not feature a state champion from the past seven seasons. The most recent in this foursome is Clinton-Massie, which won the D-IV state title in 2012 and 2013. Before that, it was Ursuline with a D-V three-peat in ’08, ’09 and ’10. To make things more interesting, this is the most balanced of the divisions, with each team holding a better than 13 percent chance of winning it all. The next three games in D-IV are as unpredictable as they come.

D-III is the only division where all four state semifinalists enter undefeated. From the beginning of the season, Region 9 has been the focal point of D-III talk, and that doesn’t change. Chardon had to get through Canfield and Dover to get to the state semifinals; the Hilltoppers enter as the odds-on favorite to win back-to-back state championships. While West Holmes is the most unlikely team to take home a state title, the winner of Badin and Granville will have the offensive firepower to challenge Chardon in the state championship.

The two lowest-seeded remaining teams are both in D-II. In fact, Winton Woods and Green both came into this postseason as No. 7 seeds in their regions. They will face each other on Friday night at Westerville Central for the right to play in the state championship game. Regardless of who wins, they will be heavy underdogs against the winner of Avon and Hoban, two teams that spent their entire season ranked in the SBLive Top 25.

With its upset win over Lakota West last Friday, Moeller has won 11 games in the 2021 season. That’s as many as the Crusaders won in the past three seasons combined. The Crusaders will maintain that underdog status against a Springfield team that has allowed only seven points throughout the entire playoffs so far. Up north, after surviving the gauntlet that is Region 1, St. Edward looks to be the odds-on favorite to win its fourth state title in the past nine years, but the Eagles have to get by gritty Upper Arlington first.