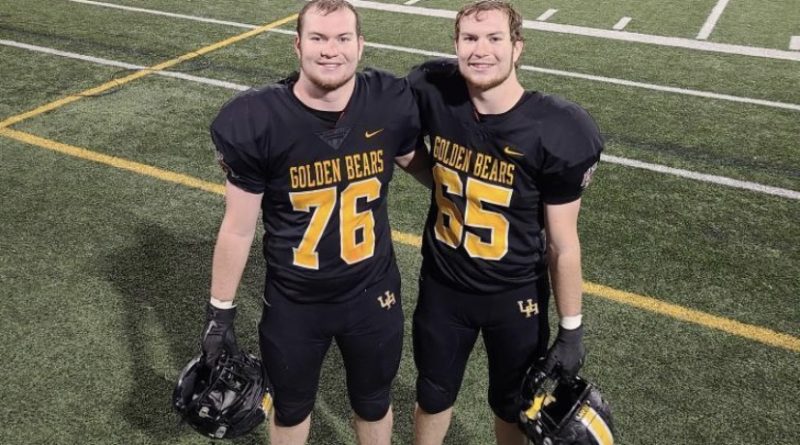 By Aaron Blankenship | Photo courtesy of the Pritchett family

As offensive linemen for Upper Arlington, twin brothers Jake and John Pritchett typically don’t receive a lot of attention for the success that the Golden Bears’ offense has enjoyed this season.

But within the program, the senior captains are deeply respected and appreciated as vital members of UA’s prolific offense, which is averaging 38.1 points and 357.1 yards per contest.

With UA’s undersized but effective linemen controlling the line of scrimmage, senior running back Carson Gresock has rushed for 2,330 yards and 33 touchdowns, as the Golden Bears are 14-0 overall after capturing their first Division I regional championship in 21 years.

“Jake and John don’t get credited with a lot of statistics, but they are our two best offensive linemen, and they have helped pave the way for Carson and our entire offense to have a tremendous season,” coach Justin Buttermore said. “We had some big question marks on our offensive line entering the season, because John was our only returning starter there.

“But Jake unselfishly agreed to move from starting at defensive tackle to become our starting center, and he’s done a great job of making a lot of our calls, in regards to what we have going on up front. And both of them have been really good run blockers, who also have the athleticism to move their feet well enough to pass block effectively, too.”

Gresock, who was named the Central District Offensive Player of the Year, is quick to give credit to the Pritchett twins — as well as left guard Charles McCarty, right guard Henry Rappolt and right tackle Riley Shimp — for playing a major role in his success.

In addition to Gresock’s gaudy numbers, the Golden Bears have featured a balanced offense, as quarterback Simon Monnin has thrown for 2,114 yards and 30 touchdowns, and wide receiver Sam Cannon has a team-record 54 catches for 843 yards with a team-record 18 touchdown receptions.

“John and Jake are the toughest guys I know, and I’ve never seen them back down from anyone or any challenge,” Gresock said. “I’ve never seen John miss a block or an assignment, and Jake’s always there in the trenches battling with the biggest, strongest guys. Our offensive line doesn’t have a lot of size, but they have a lot of heart and are very smart.”

As the Pritchett twins have made a name for themselves as offensive linemen this season, they also have played a role for the Golden Bears’ defense, which is allowing just 11.8 points per game.

When UA’s defense uses a four-man front, the twins rotate series playing as defensive ends. And when UA lines up in a five-man defensive front, most often in short-yardage and goal-line situations, the twins enter the game as linemen. John has 11 tackles and Jake has 7.5 tackles and one tackle for loss.

“The Pritchetts are tough, hard-nosed players who understand leverage and angles,” Buttermore said. “They are really good athletes who run more like tight ends than linemen. They are quiet, but they lead through their hard work on and off the field.”

The Pritchett twins credit their father, David, for teaching them the fundamentals of playing football at a young age, and for instilling them with a relentless work ethic.

David Pritchett was a starting offensive lineman at Upper Arlington before graduating in 1987, and he was a preferred walk-on at Ohio State before an injury prematurely ended his football career.

David has owned and run Pritchett Construction Services since 1998, and his sons said they have worked for him since they were in kindergarten.

The Pritchett twins have extensive experience running excavator machines, and they have helped do such things as creating and repairing sewer and water lines, as well as other construction and demolition work.

“Our dad is the hardest worker that we know, and we’ve tried to follow in his footsteps,” John said. “We love to work our butts off. We’ve worked anywhere from eight- to 15-hour days for my dad, and we’ve even worked 24 hours straight before.”

In January, the Pritchett twins, along with teammate Doug Ryan, started their own landscaping business, providing such services as mowing lawns, firewood delivery and snow plowing.

“Our dad is our idol, and working for him has been a great learning opportunity,” Jake said. “We’ve saved most of the money we’ve made to set ourselves up for the future, but we’ve invested some of it in buying our own mowers, leaf blowers, trailers and other equipment.”

‘We’re pretty much the same person’

Although Jake and John are fraternal twins, they look enough alike that even their three older sisters and best friends often mistake one of them for the other. And even though they both expressed that their twin brother is their best friend, at times they have argued to the point where it has resulted in a physical confrontation.

“We’ve had some fist fights, but we love each other a lot, and we always have each other’s backs,” John said. “We love doing the same things and being around each other. We both love country music, trucks, equipment and working outside. We’re pretty much the same person; there’s just two of us.”

The Pritchett twins have thrived on UA’s offensive line, even holding their own against Pickerington Central’s star-studded defensive line — which featured four players being offered Division I college football scholarships — as the Golden Bears defeated the Tigers 21-14 in triple overtime in a regional final Nov. 19.

“Our offensive line coach (Chris Vangas) played center (at the University of Pittsburgh) and he’s really helped us improve our techniques,” Jake said. “You don’t get a lot of statistics playing on the offensive line, but we look at Carson’s numbers and our wins and championships as our whole team’s success.”

After performing well in four football camps during the offseason, Jake is hoping to continue his football career as a long snapper in college, before pursuing a professional career in landscaping or construction.

John isn’t planning to play college football. He hopes to study agriculture at Ohio State, with the goal of running his own construction business and doing some farming as well.

“My brother and I have shared a room and spent most of our time together our whole lives, so it will be weird when we pursue different paths after high school,” John said. “We’re just so happy that we’re getting to share this experience of playing together, and with our teammates, one last time as seniors.

“We’ve dreamed about having a championship season like this our whole lives, and now that we’ve reached the state final four, we’re going to do everything we can to try to help our team win a state championship.”