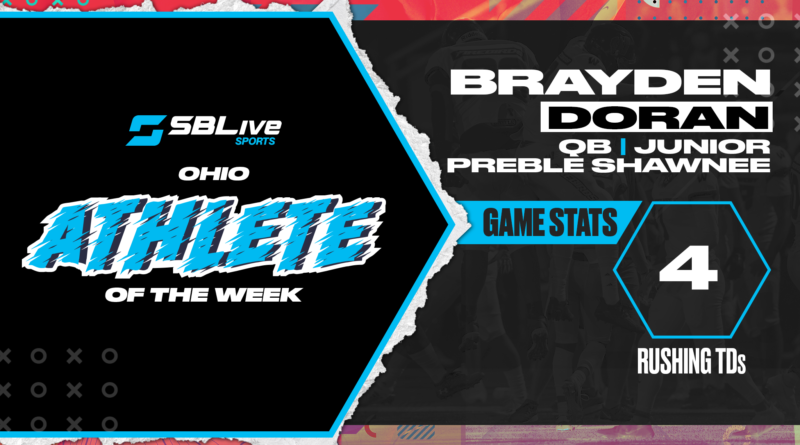 Congratulations to Preble Shawnee quarterback Brayden Doran for being voted SBLive’s Ohio High School Athlete of the Week for Nov. 8-14!

The junior had four touchdown runs, including one for 92 yards in a 35-28 win over Roger Bacon.

Boyd had a 25-yard touchdown in the first quarter and grabbed an interception against Walsh Jesuit.

Brown rushed for 205 yards and four touchdowns on 14 carries vs. St. Paul.

Carr led his team’s offense with 142 rushing yards and four touchdowns vs. Canfield.

Cannon totaled 140 yards and three touchdowns (including a 41-yard catch) vs. New Albany.

The senior put together a career game with 264 yards and two touchdowns on 21 carries vs. Canton McKinley.

Frey led her team to a Division I state championship with two goals and one assist to defeat Walsh Jesuit 4-1.

Geselbract’s arm and legs were responsible for all four touchdowns, including an 8-yard touchdown rush of his own vs. Princeton.

Gresock finished with 139 yards rushing and a touchdown vs. New Albany.

Henschen had 19 kills vs. St. Henry, helping her team to a 3-1 victory for its first Division IV state title.

Jackson played efficiently on both sides of the field, with five receptions for 112 yards and a touchdown plus two interceptions vs. St. Ignatius.

Medley recorded his 35th touchdown of the season vs. Edgewood with a total of 140 yards and three touchdowns on 19 carries.

Powers rushed for 117 yards and two touchdowns in the first half and closed out the second half with another touchdown vs. Whitmer.

Roth hit the game-winning field goal to pull off the upset vs. Archbold.

The forward/midfielder hit the game-winning goal in overtime to win the Wildcats’ third consecutive Division I boys soccer championship after outlasting Centerville 2-1.

Tishler kicked the game-winning field goal from 28 yards out vs. Medina Highland.