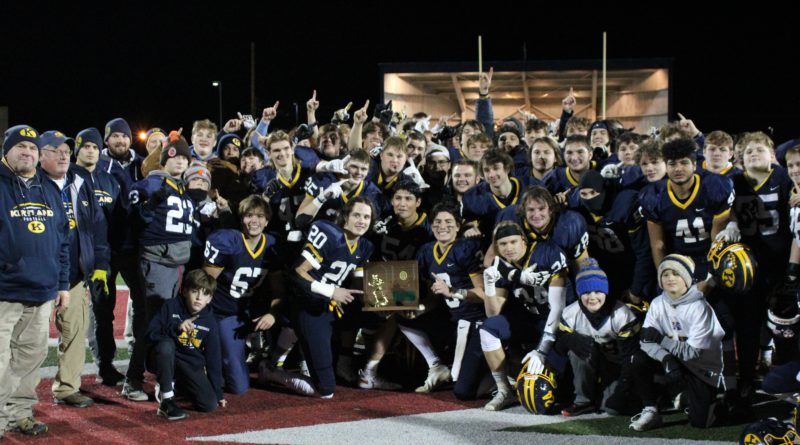 Story and photo by Lowell Spencer

NILES, Ohio — In a battle between the top two teams in Region 17 — and arguably all of Division V — the Kirtland Hornets once again reigned supreme.

The top-seeded Hornets ground out a 38-15 victory over the second-seeded, previously undefeated South Range Raiders.

“Defensively, holding that team to 15 points is the reason we are still playing,” Kirtland coach Tiger LaVerde said.

The Hornets improved to 13-0 on the season and will advance to the state semifinals for the fifth year in a row, their 10th time in the past 11 years.  The Hornets will face the Ottawa-Glandorf Titans (11-3) at 7 p.m. Saturday night at Clyde High School.

“We felt South Range was the best team after us,” Hornets quarterback Ramon Lescano said.  “We have been preparing all year. We felt if we could beat them, we could then go into the final four and championship game. But we have to get into the mindset that we beat them, and we will celebrate tonight and we will prepare for Ottawa-Glandorf.”

The Hornets set the tone early defensively when Will Sayle intercepted a Raiders pass on the second play of the game and returned it 40 yards to grab a quick 7-0 lead less than a minute into the contest. The Hornets’ defense limited the high-scoring Raiders offense to 234 total yards.

“We wanted this matchup, we really did,” South Range coach Dan Yeagley said. “No matter what the outcome was, we wanted this because if you want to be the best, you have to beat the best. They are the best. We wanted our shot at them and we fell short, but we tried. That’s all you can ask. It was a great season.”

Lescano said they had been preparing for the Raiders since the start of the 2021 season, giving “a shout-out to our JV guys — they gave us a look at the South Range offense, and we were able to shut them down to just 15 points.”

The Raiders’ leading ball carrier, Dylan Dominguez, was held to 63 yards on six carries, while quarterback Billy Skripac led the Raiders with 76 yards rushing on 13 carries and one touchdown. Skripac connected on 5 of 11 passes for 75 yards with one touchdown and two interceptions.

“I’m proud of our kids,” Yeagley said. “One game doesn’t define our season. The kids played hard, and they did everything we asked them all year. I love them so much. They fought for each other, and that is special. They have to understand that there is more to it than just this one game. The memories they made in the locker room and everywhere else are going to be lifetime memories.”

The Hornets’ punishing rushing game proved to be too much for the Raiders to contain. They racked up 327 yards on the ground on 57 carries to control the clock, shorten the game and wear down the Raiders’ defense.

Senior running back Mason Rus led the way with 117 yards on 30 carries and two touchdowns. Lescano added 93 yards on 15 tries, and Tommy Gogolin added 90 yards on six totes and a score. Lescano connected on 4 of 5 passes for 69 yards and a touchdown.

The Hornets’ first possession of the second half epitomized their overpowering rushing offense.

With the Hornets leading 21-7, the Raiders were looking to stonewall the Hornets and grab the momentum. But the Hornets methodically churned out a 65-yard drive on 16 plays, eating up just over nine minutes of the third-quarter clock.

They capped the drive off with Rus plowing in from a yard out to pull them ahead 28-7.

“That was huge,” Lescano said. “Their offense didn’t touch the ball for 10 minutes. They had only scored seven points and their quarterback is on the sidelines cold. That was a really big advantage for us.”

Kirtland will take its 54-game win streak on the road to the state semifinals, while South Range looks forward to next year.

“Maybe we will hit them again next year for the fourth time in a row,” Yeagley said with a smile. “They are going to be there, and hopefully we are there.”