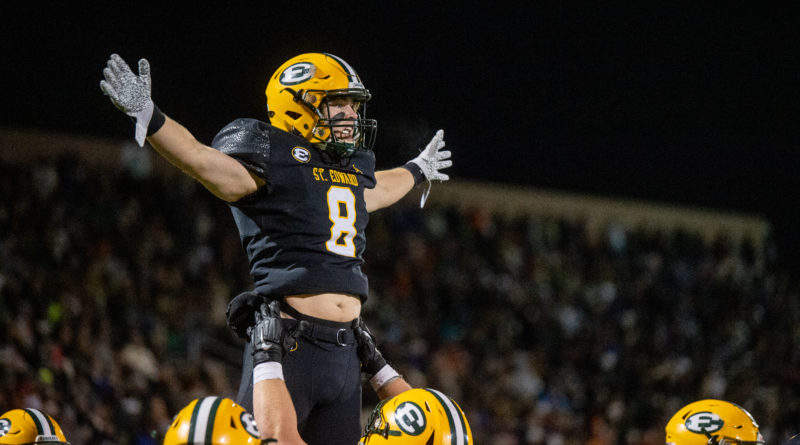 Here are some stars from Friday night’s regional final playoff games across Ohio.

Pictured above is St. Edward’s Ryan Miklich (photo by Mike Cook), who had three long TD receptions Friday against Medina.

Miklich scored a touchdown on all three of his receptions and racked up 124 yards for an average of 41.3 yards per catch. St. Edward defeated Medina 41-6.

The sophomore carried the ball 19 times for 125 yards and a touchdown in Moeller’s 21-17 victory over Lakota West.

Caffey carried 20 times for 158 yards and a touchdown.

Edmonds had a career game with 38 carries for 286 yards and three touchdowns.

Lashutka had two interceptions, including one in the end zone to keep the first overtime scoreless. Upper Arlington beat Pickerington Central 21-14 (3OT).

McElroy had 245 yards rushing on 30 carries and four touchdowns in Ursuline’s 64-35 win over West Branch.

Carr had a pair of scores to surpass the 1,000-yard mark for the season. Chardon beat Dover 31-3.

Kisley helped turn over the ball on downs with three sacks in a single drive.

Martin had 10 receptions for 129 yards and caught a 12-yard touchdown pass with 24 seconds remaining to set up the game-winning PAT.

McElroy had 138 yards on 19 carries and three touchdowns.

Williams-Dixon carried 28 times for 156 yards, had an explosive 44-yard touchdown run and made huge catches to account for three of the Knights’ touchdowns. West Holmes defeated Holy Name 31-21.

Had six touchdowns to lead Granville to a 57-49 win against Mt. Orab Western Brown.

Gillum rushed for three touchdowns and threw a touchdown pass.