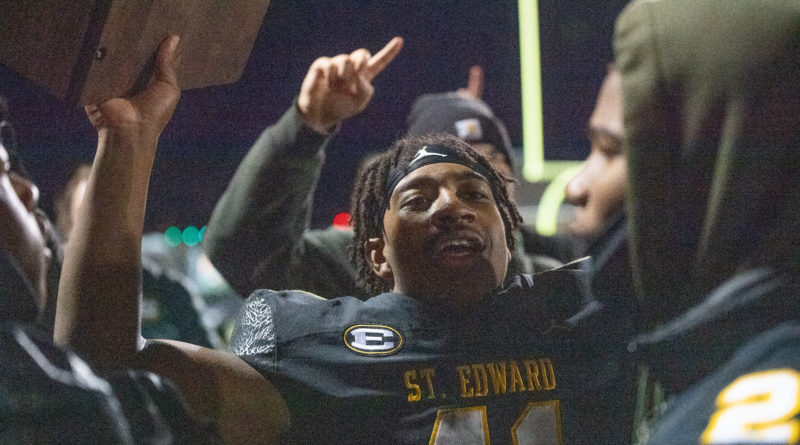 PARMA, Ohio — Medina elected to receive the kickoff, and Drew Allar and the Bees drove effortlessly down the field to score first Friday against St. Edward.

But the Eagles did not panic.

St. Edward senior defensive back Joel Castleberry fielded the kickoff on the 3-yard line and ran it back 73 yards to start the Eagles’ first drive deep inside Bees territory.

After that play, St. Edward never let its momentum slip away, as the Eagles outscored Medina 41-0 the rest of the way at Byers Field.

“Kudos to the guys,” he said. “Even when we were up 21, they can score so quickly, so we knew we had to play four quarters. I told them all week, it doesn’t matter if we’re up 14 or down 14, you can’t worry about what happens early. You’ve just gotta keep playing.”

Keep playing is exactly what the St. Edward defense did, as the Eagles were in the face of Medina quarterback Drew Allar all night.

Allar, a Penn State commit and the No. 12-ranked player in the nation by 247 Sports, was forced into the worst game of his career as Medina’s starter and the Bees’ first single-digit total since 2018 by a stifling Eagles defense.

Allar finished 27-of-62 for 299 yards for just one touchdown and two interceptions. He was sacked three times and consistently pressured by the St. Edward pass rush.

“We mixed up the looks, but most importantly I think our secondary made plays early,” Lombardo said. “We batted some balls down. We were in their pockets there. (Allar is) a great quarterback, no question.”

This dominating victory was more than just a regional championship to the Eagles, who claimed revenge for a second-round upset loss to Medina last year.

“It feels great,” said senior quarterback Christian Ramos. “I’m not lying when I say we’ve been waiting for this moment since last season. That’s been our whole motivation. You know, we’ve been taking it week by week, but at the end of the day we knew this is what we wanted, and we got it.”

Ramos led an efficient St. Edward offense that balanced a dominant rushing attack with big passing plays to keep the Bees on their heels.

The Bowling Green commit finished 11-for-22 for 200 yards and three touchdowns, while throwing one interception and losing a fumble. Ramos also added 68 rushing yards on 13 attempts and was sacked once.

All three of Ramos’ touchdowns were to senior receiver Ryan Miklich, who had one of the most impressive stat lines for either team, but emphasized the value of the team win.

Miklich scored a touchdown on all three of his receptions, while racking up 124 yards for an average of 41.3 yards per catch.

“Ramos put those balls out there perfectly, and I think they were great play calls by Coach Lombardo,” Micklich said.

When asked if he’d ever scored three times at any level, Miklich cracked a wide smile.

St. Edward’s offensive success started on the ground, as its early drives were defined by the running of senior Danny Enovitch.

Enovitch scored the Eagles’ first two touchdowns, taking in runs of 1 and 16 yards on St. Edward’s first two drives. He finished with 161 yards in addition to his two scores.

“It all starts with the (offensive) line,” Ramos said. “I love those five guys up front. They do their job, which gives me time, and gives (Enovitch) time to make a play and do his thing. I’m just so proud of those guys.”

With this win, Lombardo became the winningest football coach in Eagles history with his 74, eclipsing his father-in-law Josh Gibbons’ record of 73.

Now St. Edward looks on to the Final Four, with a matchup against Upper Arlington (14-0) set for next Friday.