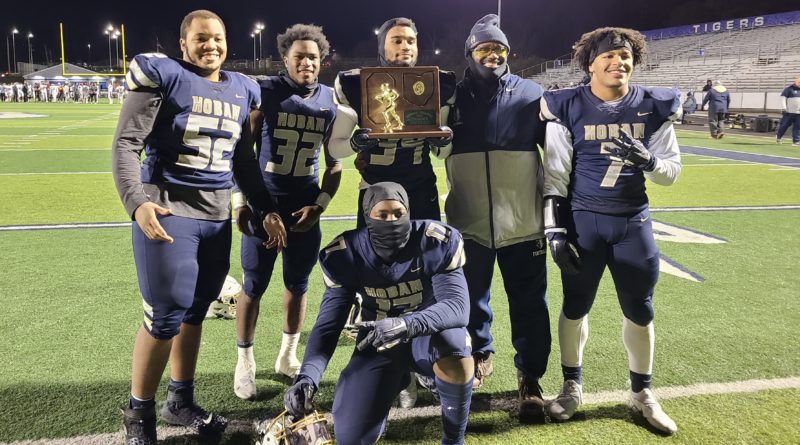 TWINSBURG, Ohio — “I love that dude!”

Those were the first words out of the mouth of Archbishop Hoban offensive lineman Colton Burkhart when he was told junior running back Lamar Sperling had rushed for 357 yards in Archbishop Hoban’s 49-30 win over Walsh Jesuit on Friday night at Tiger Stadium.

It was a performance for the ages for Sperling, who carried the ball 31 times for those 357 yards and had five touchdown runs to send Hoban to the state semifinals for the sixth time in seven years.

When the Division II regional final was over, the first thing Sperling wanted to do was what he always does — make sure everyone knows he couldn’t do this without his offensive line.

“My O-line did wonderful today,” Sperling said. “They pointed out things when (they) happened during the game.”

His willingness to praise the big guys up front is one thing that has endeared him to his teammates, especially those blocking for him.

“People always say big guys get no love because we are just the big guys who block,” Hoban offensive lineman Keyshawn Haynes said. “But to hear him heap praise on us — that warms my soul.”

With Hoban leading 21-17 at the half, the Knights took the second-half kickoff and went right down the field, where Sperling finished the drive with a 3-yard score. On the next possession, he went up the left sideline, shook off a defender and then cut inside as the safety tried to take the angle on him. When the play was over, Sperling was standing in the end zone with a 45-yard touchdown.

“He has a lot of talent, great vision,” Hoban coach Tim Tyrrell said. “He stays with his blocks, and it is hard to tackle him. It is hard to get a clean hit on him, that’s the biggest thing. You don’t hit him square.”

After Hoban was called for a penalty on the first play of the next series, Sperling iced the game on the next play when we took a handoff around the right side and sprinted 61 yards for a score to make it 42-17.

“We knew they were going to come out hard to try to stop the run,” Burkhart said. “We saw them stack the box, and we also saw they couldn’t do anything about it. I am glad I have someone like Lamar behind me, and I love blocking for him.”

As a team, Hoban ran for 488 yards on 46 carries against Walsh. During the postseason, the Knights had run for 980 yards in three games.

Sperling and the running backs get the credit, but it starts in the trenches with offensive linemen like Haynes and Burkhart, along with the other starters Michael Noe, Drew Holt and Will Satterwhite, plus Nate Cross who rotated in throughout the game.

And that guy running behind them has been special all season, but especially in the postseason.

In four games, Sperling has rushed for 1,020 yards and has scored 18 touchdowns. He is well aware of the Hoban lineage at running back — Tyrell Sutton, Todd Sibley, Tyris Dickerson and DeaMonte Trayanum, among others. But when all is said and done, he doesn’t compare himself those backs.

“I am me. I am my own person. I am not them,” Sperling said. “But at the end of the day, I see the plaques on the wall, and I hear about Chip (Trayanum) or Tyrell or Dickerson. But at the same time, I have to play my game.”

On the season, the 5-foot-10, 180-pound running back has 2,525 yards rushing and 39 touchdowns. But when his offensive linemen ask him about his stats, he includes them.

“I asked Lamar the other day how many yards he had on the season,” Haynes said. “He said ‘I don’t know, I think we have somewhere around 2,000.’ I like how he included us all in it.”

Sperling doesn’t just talk about his linemen after a game or when talking to media about the team. He lives what he says.

“I have been very fortunate at Hoban to have every running back praise the O-line,” Burkhart said. “But Lamar does more than praise us. He wants to be with us all the time. He’s our friend. He’s our brother.”

And like family, his brothers will be there for him at all times.

“I live my whole life for Lamar,” Haynes said. “I’m willing to do everything for him.”