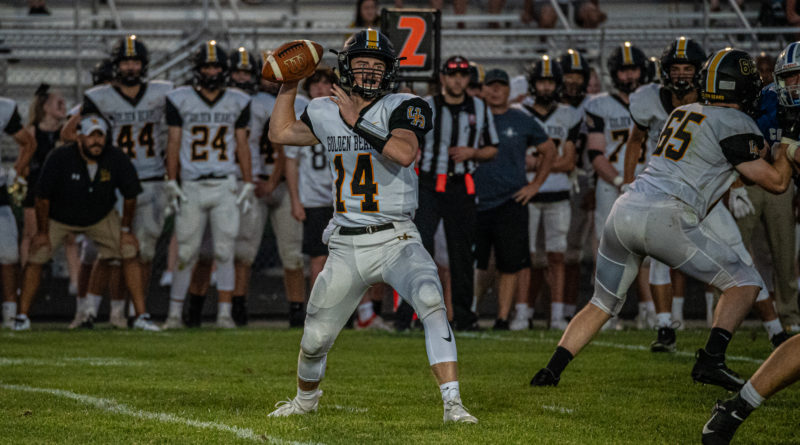 An unstoppable force is on course to collide with an immovable object Friday night at Westerville Central High School.

Upper Arlington’s offense consistently has mowed down opposing defenses this season, as the Golden Bears are averaging 39.5 points and 366.5 yards per game, 9.2 yards per passing attempt and 7.1 rushing yards per carry.

Pickerington Central has featured one of the stingiest defenses in the state, with the Tigers allowing an average of only 6.3 points and 132.4 yards per game, while holding opponents to 2.3 yards per rush and 4.9 yards per passing attempt.

Something will have to give when top-seeded Upper Arlington (13-0 overall) and second-seeded Pick Central (12-1) meet in the Division I, Region 3 final on Friday at Warhawk Field.

“Upper Arlington has been very disciplined and well-coached in all three areas of the game, and their offense has performed exceptionally well this year,” said Pick Central coach Jay Sharrett, who has led his team to five consecutive regional titles. “Our defense has been stout all season, so this should be a great matchup for our regional championship.”

UA features the Central District Offensive Player of the Year in Carson Gresock, who has rushed for 2,224 yards and 33 touchdowns on 244 carries for an eye-popping 9.1 yards-per-carry average.

However, the Golden Bears also have a prolific passing attack, led by quarterback Simon Monnin, who has completed 138 of 212 passes for 1,969 yards, with 27 touchdowns and three interceptions.

“People have talked about our running game from the beginning, and rightfully so, because Carson’s one of the best backs in the state, and he’s had a tremendous season,” Upper Arlington coach Justin Buttermore said. “But our offense is balanced with a good passing game, and based on what defenses give us, we can pass or run the ball effectively early in the game.”

The Tigers forced 32 turnovers and scored six defensive touchdowns this season, and Sharrett said his defense has to continue that trend Friday.

“Upper Arlington can run and pass equally well and they make very few mistakes, so we’ll need to be ready to take advantage of it when they do make an error,” Sharrett said. “We hope to stack them up a little bit on first down, to put them in second- and third-and-long situations, where we’ll have a better shot at making plays on defense.”

Gorman has 81 tackles, eight sacks and a forced fumble, and Frazier has 90 tackles, three sacks and two tackles for loss.

The Tigers’ defensive backfield features two more Division I college recruits in safeties Sonny Styles (Ohio State) and Rasheem Biles, who has multiple offers, including one from the University of Pittsburgh.

Styles has 68 tackles, two tackles for loss, a sack, a forced fumble and three interceptions, one of which he returned 100 yards for a score. Biles has 83 tackles, eight for loss, four pass breakups and has returned two of his team-high four interceptions for touchdowns.

“I would be shocked if there’s a more talented defense in the state, in terms of size, speed and athleticism,” Buttermore said. “They have great athletes playing at all three levels, and most teams go backwards instead of forward against them.

“They have four defensive linemen and two safeties who are scholarship players, so this will be the biggest challenge we’ve faced this season.”

Junior center Joe Egan and tight ends Gillison and Gorman also are key contributors to Central’s line, which has paved the way for the Tigers to rush for 3,272 yards on 512 carries (6.4 average) with running backs Olando Kamara (885 yards on 147 carries), Dylan Bryan (605 yards, 94 carries) and Josh Harlan (374 yard, 46 carries) leading the charge.

Quarterback Braden Mantooth is 86-for-144 passing for 969 yards, with eight touchdowns and six interceptions.

“Our offense has been systematic and effective,” Sharrett said. “Our line is playing like a tight unit, and we’ll need to create some creases for our running backs, because Upper Arlington rarely gives you a short field to work with, so we need to be prepared to drive the length of the field against them.”

Buttermore said his defense must rally to the ball and try to outnumber the Tigers at the point of attack, considering the Golden Bears can’t match Central’s size at the line of scrimmage.

“They are a power-running offense that’s huge up front, and their sheer size is very difficult to deal with,” Coach Buttermore said. “They run the ball 80 percent of the time, but mix in the pass enough to keep you honest.

“We don’t have any scholarship players, but we have a group of guys who have high football IQs and play great team defense, and we’ll have to keep that going.”

This is familiar territory for Sharrett, who in his 19th season has led the Tigers to a 202-37 record, eight regional titles and two state championships (2017 and 2019).

However, the Golden Bears beat Central 35-29 in overtime in 2016 and defeated Central 27-17 in the first round of the Division I, Region 2 playoffs in 2015, to become the last central Ohio squad to knock the Tigers out of the tournament.

The winner of the Region 3 tournament will advance to a state semifinal to face St. Edward or Medina on Nov. 26 at a neutral site.

“We have guys who have started more than 40 games each and have experience playing in and winning championship games, and that experience is real valuable this time of year,” Sharrett said.