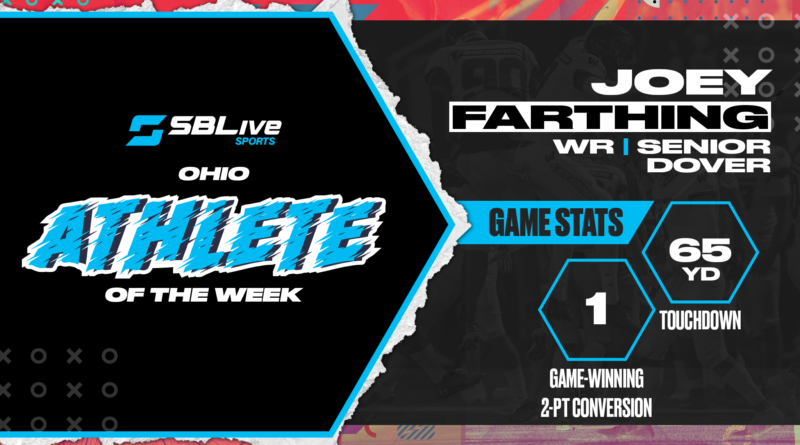 Congratulations to Dover wide receiver Joey Farthing for being voted SBLive’s Ohio High School Athlete of the Week for Nov. 1-7!

The senior notched the game-winner in overtime against Aurora with his two-point conversion and had a 65-yard touchdown earlier in the game.

Farthing received 53.01% of this week’s vote, beating out Steubenville RB Spencer Ostovich, who finished second with 43.15%. There were over 22,000 votes tallied this week!

The senior was responsible for 443 yards of total offense and six touchdowns vs. Cleveland Heights.

Bebie had 225 yards and three touchdowns on 22 carries vs. Buckeye.

Brungard rushed for 270 yards and four touchdowns and threw for another 80 and a touchdown in Springfield’s 41-13 win over Norwayne.

Caffey had 123 yards on 14 carries and four touchdowns to storm past Fremont Ross 52-26.

Gibson did it all for Whitmer as he finished with three interceptions, a fumble recovery, a rushing touchdown and a sack.

Gresock had 28 carries for 252 yards and four touchdowns against Reynoldsburg.

Griffith scored the game-winner in overtime to clinch Bishop Watterson’s second consecutive state championship with a 2-1 win over Thomas Worthington.

Hartman won her second straight Division II state girls title as she finished first on the 3.1-mile course with a time of 17:31.6.

Kyle notched her 12th goal of the season when she scored the lone goal in Wyoming’s 1-0 victory over Badin and secured the Division II girls regional title.

Otsego called Leiter’s number early and often, giving him 37 carries as he ran for 257 yards and three touchdowns in Otsego’s 35-28 win over Eastwood.

Medley was responsible for 200 of Piqua’s total 244 yards as he rushed 28 times for 135 yards and two touchdowns and had 65 yards on five receptions.

Novak led his team to a Division III boys regional title with three goals in Crestview’s 4-1 win over Kirtland and leads the state in goals (54) and assists (43).

Ostovich rushed for five Steubenville touchdowns in a 49-42 loss to Kenston.

Williams-Dixon led the Knights to a 28-25 victory over Tiffin Columbian with 176 yards and four touchdowns on 31 carries.

The signal-caller went 14-for-28 for 166 yards with a season-high five touchdowns.

Zegarski won the individual OHSAA Division I boys state title and set a new all-time Division I record with a time of 14:39.9.