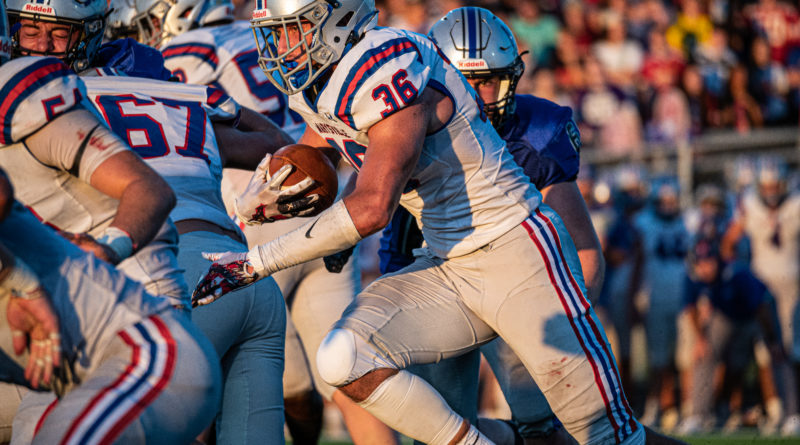 Here are some stars from Friday night’s Round 3 playoff games across Ohio.

Pictured above is Marysville running back/linebacker Gabe Powers (photo by Gabe Haferman), who dominated on both sides of the ball Friday night.

Jackson had five receptions for 112 yards and a touchdown while also playing efficiently at corner, picking off St. Ignatius twice in the first half and making a huge fourth-down tackle to secure Medina’s 27-14 win.

Goode finished with 107 yards and the lone touchdown in the Firebirds’ 12-2 win over the defending Division I state champs, St. Xavier.

The senior put together a career game with 264 yards and two touchdowns on 21 carries. The Eagles had a 377-92 rushing advantage as they shut out Canton McKinley 42-0.

Smoot rushed for 95 yards and a touchdown in Springfield’s 13-0 shutout win over Findlay.

Fisher intercepted the ball with 30 seconds remaining and returned it around the 30-yard line to set up the game-winning field goal.

Tishler made the game-winning field goal from 28 yards out to upset Medina Highland 23-20.

Lee had five catches for 109 yards along with a 51-yard touchdown run.

Gresock rushed for 139 yards and scored on a 2-yard touchdown run.

Carr led the way on offense with 142 rushing yards and four touchdowns as Chardon eliminated Canfield from the playoffs with a 27-14 victory.

Geselbracht’s arm and legs were responsible for all four touchdowns including an 8-yard touchdown run of his own. Moeller beat Princeton 28-21.

McElroy scored two touchdowns, one from 23 yards out and the other on a 5-yard run as Massillon routed Big Walnut 38-0.

The Ohio State commit rushed for 117 yards and two touchdowns in the first half and then scored on a 16-yard touchdown run in the third quarter to start the running clock. He also harassed the Whitmer offense all night in the Monarchs’ 49-14 win.

Medley had 140 yards and three touchdowns on 19 carries to raise his season total to 35 touchdowns. Piqua beat Edgewood 28-21.

Natale threw a 58-yard touchdown pass to start the scoring in the first quarter and then threw a 38-yard pass in the third quarter to set up a 1-yard touchdown run as Walsh Jesuit beat Benedictine 34-20.

Boyd had a 25-yard touchdown in the first quarter and then intercepted the ball and returned it to the 3-yard line in the second quarter.