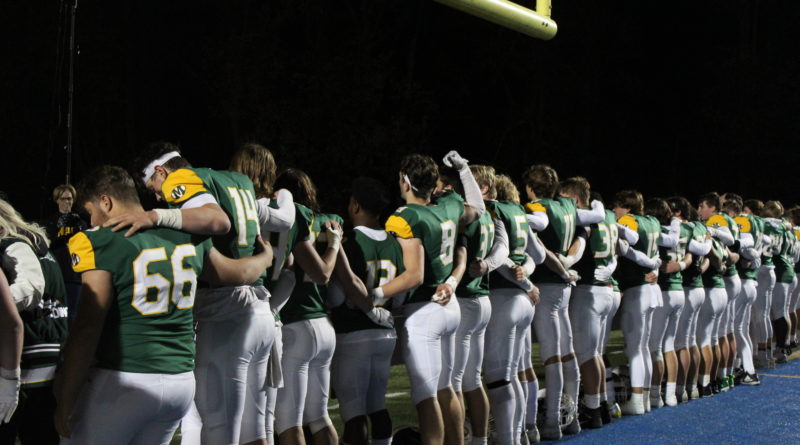 Story and photos by Owen MacMillan

When Medina punted the ball away with just over three minutes left in a game against St. Ignatius, the Bees put the game in the hands of their defense.

While most know of the Bees for their prolific offense led by Penn State-bound senior quarterback Drew Allar, the defense was the difference in keeping Medina (13-0) undefeated.

The final St. Ignatius drive started with a 6-yard sack by senior linebacker Matt Spatny, which spurred the Medina defense to two more tackles for loss to hold off the Wildcats (7-5).

Medina won 27-14 to move on to a rematch from last year’s playoffs against No. 1 seed St. Edward (12-1) next Friday for the region championship.

“I know Drew is a great quarterback, but I think the defense is the backbone of this team,” Spatny said. “We can get stops so that Drew can go out there and get a touchdown with great field position. I think that’s the heart of the team.”

Friday was the first time Medina had been held under 30 points this season, but Allar still put up big numbers, going 29-for-52 for 370 yards and three touchdowns.

Allar, who will graduate early to be on Penn State’s campus by spring semester, spread the ball around even more than usual, hooking up with seven different receivers.

But opposite the air-raid attack of Medina’s offense, the Bees’ defense played an equally impressive game.

Spatny had another big tackle for loss earlier in the game, dropping star St. Ignatius senior running back Marty Lenehan for a loss of three on third-and-short to force a punt and an ensuing Medina field goal.

“We have so many starters back on both sides of the ball, especially on defense,” Allar said. “They are super experienced, and I think it’s shown off this whole season. Even if they might not get the recognition they deserve, they really stepped up tonight.”

The Medina defense made a plethora of big plays, forcing four turnovers. St. Ignatius senior quarterback Joey Pfaff was picked off twice in the first half — by Jackson, who also plays corner for the Bees, and senior safety Keon Johnson.

The Wildcats also put the ball on the ground twice, one off a hit on Lenehan and another on a botched jet sweep, and Medina recovered both.

St. Ignatius coach Chuck Kyle was disappointed with his team’s inability to protect the ball against such a dangerous offense.

“We were in this ballgame,” Kyle said. “It was a battle, but we put ourselves in a little bit of a problem when we turn the ball over like that. That’s not fair to the defense.

Medina was able to capitalize on only two of those turnovers for 10 points, a statistic that irked coach Larry Laird.

“Our defense stepped up and got some turnovers, but we’ve gotta finish drives,” Laird said. “We came up empty, in the first half, I think two or three times. We have got to hit pay dirt there.”

The front seven of the St. Ignatius defense created issues for Laird’s offense.

But through hitting deep balls, Allar and the offense were able to produce enough to win.

“Their strength on their defense was definitely their front seven,” Allar said. “They have good defensive backs, but when their defense is really on, they get pressure without really blitzing anybody. They did that a few times, but we got back on track pretty well tonight (by) making some key plays.”

St. Ignatius struggled to find any consistency on offense, and the only reliable source of production for the Wildcats was on the ground.

Lenehan finished with 135 yards and two touchdowns on 24 carries.

He opened the second half by getting St. Ignatius right back in the game, carrying the ball on all six of the Wildcats’ snaps on their opening drive. He rushed for 48 yards and a touchdown, but after that point the Bees seemed to find the answer to his game, as he ran for just 20 more yards.

“(Medina was) really blitzing,” Kyle said. “And some of their blitzes were, I think, designed looking at our running game trying to seal up some of those seams we were finding.”

As Medina moves on in the playoffs, it will have to contend with injuries to valuable players like Rodak, senior defensive lineman Ryan Farrell and senior corner Isaiah Perry.

The injury to Farrell created a particularly strange situation, as he is also Medina’s long snapper, and Allar (the backup long snapper since mentioning he knew how in Week 3) stepped in to long-snap for the extra point following his own passing touchdown.

The snap went high, but Schramm handled the hold and the extra point went through. When asked if it was harder to long-snap or play quarterback, Allar didn’t hesitate.

Medina now looks to St. Edward, a team the Bees upset as the No. 8 seed last season in the regional quarterfinals.

“Our kids expect to win,” Laird said. “We don’t put in all this time without expecting victory. That’s kind of a motto around here, and the kids buy into that. They’ve worked very hard to get back to the chance to go to state.”