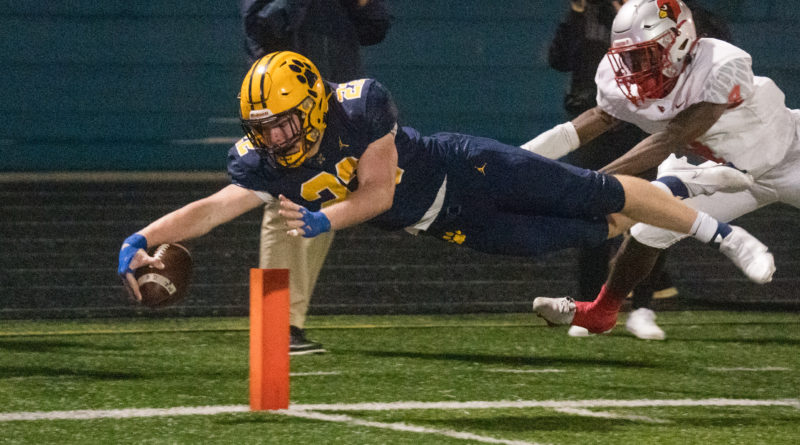 As we get deeper into the postseason, there are fewer games to watch as half the teams get eliminated.

I mean, that’s how a single-elimination tournament works. However, the games keep getting better — and the regional semifinals are loaded with intriguing matchups.

But there are only so many hours in the day. So which games should you spend those hours on?

TOP 10 OHIO FOOTBALL GAMES TO WATCH IN ROUND 3

Six years in a row, the Roughriders have won at least one playoff game. This is a program with tons of history that went through a rough rebuild after losing 21 straight games over the course of three seasons in the early 2010s. While their run-first, run-last, run-everywhere-in-between offense seems outdated, it has led them to plenty of success in recent years — though many locals (read: from rivals Celina and Wapak) believe this philosophy has put a glass ceiling on the success of the program.

One of the few games this week that figures two teams that weren’t featured at all last week, and for good reason. There was little doubt that this regional semifinal would feature the Warriors and Pirates. On the other side of the Region 13 bracket, historic powerhouses Ursuline and Glenville will square off, but the state semifinalist should come from this game. West Branch comes in undefeated against a relatively tough schedule, while Perry’s two losses came to Kenston and Kirtland. That’s nothing to turn your nose up at.

Big Walnut comes into this regional semifinal as the No. 1 seed at a perfect 12-0. But the Golden Eagles come in as the clear underdog to a historic Massillon Washington program. The glaring issue with Big Walnut is its relatively weak schedule for a D-II program, leading the Golden Eagles to fail to crack the SBLive Top 25 until the final edition at No. 24. A nail-biter in the first round against No. 16 seed Olentangy didn’t help their case, but this is their chance to prove all the haters wrong.

One of three games in the regional semifinals that pits two undefeated teams against each other. (Surprisingly, the other two are both in Region 17.) There is a belief around the state that football in Columbus just doesn’t live up to what is experienced in Cleveland and Cincinnati. While Pickerington Central has done some great work in shedding that stereotype, not everybody is convinced. This contest could represent the next wave of great Columbus teams looking to remove that stereotype. Regardless of the opinions of the Lake and the River, this should be a great contest.

McComb just can’t get away from former Blanchard Valley foes. Last week, the Panthers eliminated Leipsic thanks to a blocked field goal at the end of regulation and an interception in overtime. This Saturday, McComb gets the Chieftains for the first time since 2018, when Hopewell Loudon left the BVC for the Sandusky Bay Conference. During their five-year tenure, McComb was undefeated against Hopewell Loudon.

Paired with Elyria Catholic vs. Elmwood, these two games are like 5a and 5b in the top 10 games to watch. Region 18 is the most unpredictable region in the state, and it’s not even close. Otsego’s undefeated record speaks for itself. O-G may be 9-3, but also faced one of the toughest schedules in D-V, being in the mostly D-III Western Buckeye League. The only thing that would be a surprise in Region 18 is a lopsided affair.

Clyde got some sweet, sweet revenge on Shelby last week when it took the Whippets into double overtime, winning and eliminating them from the postseason. Last season, it was the Whippets who eliminated Clyde, only to turn around and get knocked out by the eventual state champion. That state champion? Van Wert. The Cougars come in having won 25 of their last 27 games over the past three seasons.

This is a tale of two teams that went in opposite directions in the latter parts of the season. For the No. 1 seed Benedictine Bengals, they started off the season 6-0 before suffering back-to-back losses to Hoban and Nordonia to end the regular season. As for Walsh Jesuit, the Warriors opened the season 1-2 before stringing together nine straight wins, including last week on the road against a criminally underappreciated Hudson team. By the way, those two losses for Walsh Jesuit? Hoban, which is still alive in Region 5, and their opponent Friday: Benedictine.

Back on the opening weekend, Lakota West suffered its first loss of the season, 31-14 at St. X. The Firebirds haven’t lost since. St. X, on the other hand, has held onto the top spot of the SBLive Top 25 despite two losses by a combined eight points. The Bombers are still the favorite to win their third state title in six years. But Lakota West is not the same team it was in mid-August, and this time the Bombers and Firebirds will play on a neutral field at Princeton. It was so hard to not put this No. 1, but there’s another game that has the advantage because we haven’t seen it yet.

Despite being 12-0 and featuring Drew Allar, who should be Mr. Football, there are some question marks surrounding Medina. Only one of the Battling Bees’ regular-season opponents is still alive in the postseason. As for St. Ignatius, five of their seven in-state regular-season opponents are playing this weekend. This was an easy pick for the game of the week as these two juggernauts are more than capable of upsetting St. Edward next week and rolling all the way to the state championship.