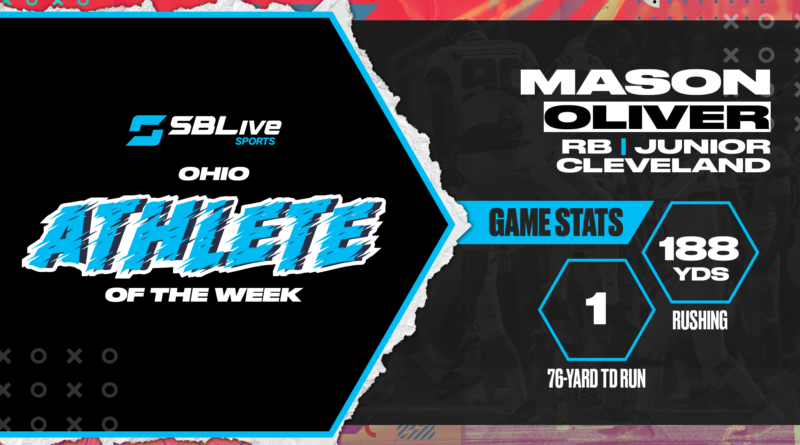 Congratulations to Elmwood running back Mason Oliver for being voted SBLive’s Ohio High School Athlete of the Week for Oct. 25-31!

The junior had 188 yards rushing, including a 76-yard touchdown on the first play of the game in a 63-14 win over Brooklyn.

The Penn State commit flashed his talent in just a quarter and a half of play by finishing 13-for-17 for 252 yards and five touchdowns.

Buchanan had a goal and assisted the game-winning goal in a 2-1 win over Magnificat that will send Hudson to the district final.

Brecht had a hat trick and an assist in Olentangy’s 9-0 win over Pickerington Central.

Cardaman scored two touchdowns and had two interceptions in the first half vs. Ravenna.

Duhaime was the individual champion at the Division I girls cross country regional meet, finishing in 18:59.1. Perrysburg had all seven of its runners finish in the top 10 to advance to the state meet.

Ellis had 17 carries for 216 yards and three touchdowns in a 49-7 win over Marion Pleasant.

Hamilton led her team with four goals and an assist vs. Olentangy Orange and had a goal and an assist on the game-winner vs. Columbus Academy.

In Centerville’s 34-point comeback vs. Springsboro, Harrison passed for three touchdowns and added a rushing score of his own, finishing 15-for-21 for 206 yards along with 46 rushing yards.

Lee had eight catches for 159 yards and three touchdowns.

Rorabaugh had a goal and an assist to lead Revere to a 3-0 district final win over Medina Buckeye.

The freshman completed 8-of-12 passes for 162 yards and three touchdowns in his first varsity start, a 49-6 win over Wellston.

Smoot was responsible for all six of Springfield’s touchdowns and threw a 41-yard touchdown pass before the half.

Winkler placed first at the Division 1 boys cross country regional meet with a time of 16:18.6, giving St. Francis de Sales enough to win the championship by a point.