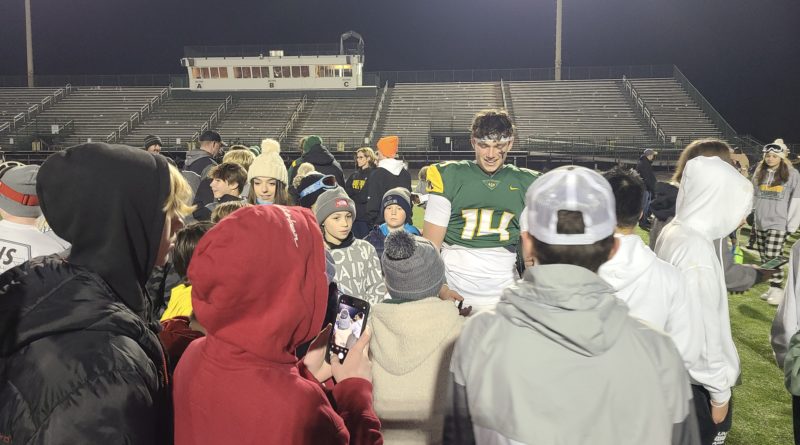 MEDINA, Ohio — Medina quarterback Drew Allar stood among a throng of fans on the field Friday night, posing for pictures, signing autographs, shaking hands and even giving out a few hugs. He did everything short of kissing babies.

The senior tried to accommodate everyone and did it all with a smile on his face. And why not?

Allar had just played the final home game of his career at Ken Dukes Stadium, where he accounted for 443 yards of total offense and six touchdowns as he led the Bees to a 45-14 win over Cleveland Heights in a Division I, Region 1 regional quarterfinal, moving Medina’s record to 12-0.

“To see the community rally around us, it is really special,” Allar said.

Despite his lowest completion percentage of the season — he completed just 17 of his 37 passes Friday night — the Penn State commit showed flashes of brilliance when the Bees needed him most and made it obvious why he’s one of the top quarterback prospects in the country.

One such play came in the second quarter with Medina leading 14-0 and the ball resting on the Cleveland Heights 29-yard-line. Allar took the shotgun snap, rolled to his left and then threw across his body toward the end zone, hitting wide receiver Brennen Schramm in stride for a touchdown.

“It was an incredible throw,” Schramm said. “That just shows why he is the No. 1 quarterback in the nation. The stuff he can do is crazy.”

While he threw for four touchdowns in the game, Allar also ran for two scores. And at 6-foot-5, 220 pounds, he doesn’t simply run. He delivers blows. On the first touchdown run, he stiff-armed a defender into the ground. And then on the second one, he bulldozed a defender at the goal line.

“He showed some guts running the football,” Medina coach Larry Laird said. “We haven’t let him run the ball all year but it’s playoff time. Look at him. He’s a horse.”

Following a junior season in 2020 that saw Allar named second-team All-Ohio after he threw for 2,857 yards and 26 touchdown passes and led Medina to the first regional final in school history, he came back determined to be better than he was a season ago.

As a team, the Bees went 10-0 in the regular season for the first time in school history and won their first Greater Cleveland Conference title since 1973.

As an individual, Allar has put up numbers that make him the frontrunner for Ohio’s Mr. Football Award.

Including the playoffs, he has completed 64.1 percent of his passes for 3,747 yards and 44 touchdown passes to just five interceptions. He has also rushed for nine touchdowns and had his first game over 100 yards rushing on Friday with 139 against the Tigers.

“It’s been crazy,” Allar said of the season. “We envisioned all of this happening before the season, but for it actually to work out like this, it is pretty surreal. I couldn’t be prouder of the team.”

It might be a team game, and the entire team might have bought in, but the one who sets the tone for the team is the star quarterback himself.

“Drew is the straw that stirs the drink,” Laird said. “Nobody works harder than Drew on the field and in the film room, and it comes to fruition every Friday when we play.”

Some of those Friday nights have been downright incredible this season.

That’s 950 yards passing and 12 total touchdowns in a two-week span with one of those games against a team that finished as the No. 3 seed in Region 1 (Stow).

In the penultimate game of the regular season, James Franklin and Penn State offensive coordinator Mike Yurcich made the trip to see their prized recruit.

They watched on the sideline next to former Browns quarterback Bernie Kosar as Allar completed 14 of his 17 passes for 303 yards and five touchdown passes in a 70-7 rout of Lorain. The senior played a little more than one quarter in the game because Medina led 49-0 after its first possession of the second quarter.

The head coach of Penn State showing up at the game that night, especially because there was bad weather in the area and some games were postponed, meant a lot to the quarterback.

“I think it just speaks to the type of coach he is really,” Allar said. “It was really cool to see he was able to make that trip out.”

With 304 yards passing in Friday night’s playoff win over Cleveland Heights, Allar has surpassed 300 yards passing in seven of Medina’s 12 games. In three of the five games in which he didn’t surpass 300 yards, he also didn’t play the entire game because Medina held huge leads.

What has changed this year for Allar? His coach attributes it to something relatively simple.

“I think it’s a matter of confidence,” Laird said. “When he takes the field, he knows he has to be the guy for us.”

Allar has been the guy so far this season for the Bees on and off the field. He has been the biggest fan of his teammates, doing everything he can to help them succeed individually as well as making the team better in the long run.

“He is always pushing you to do your best,” Schramm said. “Always making sure we take it one play at a time. Short-term memory if something happens. Great teammate, great player, great everything.”

It’s never more evident how much of a team guy Allar is than when he’s asked about postseason awards such as Mr. Football or about his national recruiting rankings. The first thing he does is name players who have helped him along the way.

“I couldn’t be in these situations or these award races without everybody else,” Allar said. “The O-line up front with Zach (Rosen), Vinny (Pfahl), Patrick (Gillespie), Evan (Feora) and Mark (Halstead) giving me time to stand up in the pocket, and we’ve had like seven receivers make contributions this year — like Schramm, (Michael) Rodak, (Drew) Hensley, Jujuan (Jackson), (Matt) Rudolph, Reid (Kelps) and (Ben) Butler. I couldn’t be in these positions without the team, and that’s how I look at it.”

The thoughts of awards and a future at Penn State all sound great, but Allar has just one thing on his mind right now — raising the state championship trophy for the first time in school history, and to do it with a group of guys he has played football with since youth leagues.

“It’s pretty cool, but none of it matters if we don’t win the state title to me,” Allar said. “Right now, my total focus is closing this out and winning a state championship.”

If Allar and the Bees can make that happen, Friday night won’t be the last time the quarterback is posing for pictures and signing autographs in Medina.