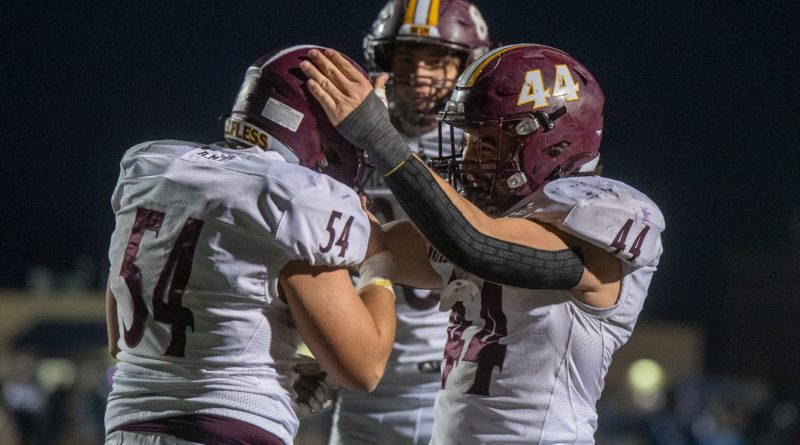 Late in the second quarter of a Round 2 playoff game against Hudson, Walsh Jesuit found itself in unfamiliar territory: down two touchdowns and without any points.

But the Warriors held the Explorers’ offense at midfield of Hudson Memorial Stadium, then marched 77 yards to score their first points of the game on a touchdown run by senior quarterback Matt Natale just 17 seconds before the half.

“We aren’t used to being down 14 in our games,” Natale said. “So it kinda just took a little bit, and we just grinded and worked hard and got it back. They were getting the ball at the start of the third, so we needed to put something together and put some points on the board so we could get a little momentum going into halftime.”

From the beginning of that drive, Walsh would outscore Hudson 23-0 on its way to a 23-14 win and rematch date with Benedictine next Friday in the Region 5 semifinals.

Walsh (10-2) extended its winning streak to nine, with its last loss coming in a double-overtime loss to Hoban in Week 3, and reached 10 wins for the first time since 2011.

“Hats off the the seniors,” coach Kyle Alexander said. They lead us every night.”

After that first touchdown, Walsh would grind the Explorers (9-3) down and slowly wrest away all the momentum.

“As we continued to make plays, I felt the crowd get a little louder and the team had a little more pep in their step. We were just all-around (becoming) a better team,” Natale said.

The Warriors took their first lead, 17-14, on a 5-yard pass from Natale to senior receiver Josh Campagna, then put the game out of reach when center Joey DeAngelis fell on a Warriors fumble into the end zone on the next drive.

Holding on to the ball was a struggle for the Warriors all day. Walsh put the ball on the ground five times, but as it happened on that eventual touchdown, the ball seemed to bounce the Warriors’ way, as Hudson recovered only one of them.

Natale took advantage of those close calls, as he threw for 210 yards on 14-of-24 passing in addition to his passing and rushing touchdown.

“Matt Natale is the toughest,” Alexander said. “When I think of Natale, he will go down (as a guy who) just always goes out there and competes. He puts the ball on the ground three times, then comes out and leads us down the field and makes a couple great throws.”

Natale spread the ball out well among his top three wideouts.

Campagna finished with the game’s only receiving touchdown and 43 yards on four receptions, while fellow senior Christian Ochei led the Warriors in receiving yards with 59 on three receptions. Junior Trey Bell caught four passes for 48 yards.

This class of Walsh seniors saw the Warriors go winless their freshman year, and Alexander admired how far his team has come since that year.

“The senior class could have packed it up in their freshman year when they were 0-10, then went 1-9 my first year here,” he said. It’s crazy.”

All of Walsh’s yards were hard-fought against a stout Hudson defense, which held the Warriors to their lowest score of the season.

“Credit to Hudson, we haven’t been stopped like that in two years,” Alexander said. “As far as a defense coming out and doing a really good job of switching things up, they have great kids that play really hard. I’m just proud of the resiliency of our guys.”

Hudson coach Jeff Gough came away happy about his defense.

“I think we did a pretty good job of shutting down a pretty prolific offense,” Gough said.

Hudson came out hot, scoring on its first two possessions with long, methodical drives both capped off with rushing touchdowns by senior running back Ryan Evans, starting in place of the injured Aiden Lal.

The defense of Walsh adjusted well at halftime and shut down the Explorers’ offense, causing four turnovers: two interceptions and two turnovers on downs.

Hudson quarterback Jagger Pallay finished the game with 129 yards on 8-of-18 passing, but the breakdown of his night shows how dominant Walsh was after halftime.

In the first half Pallay threw for 88 yards while taking care of the ball. In the second half he was 4-of-12 and threw two picks.

Evans finished with 98 yards and two touchdowns, while the Warriors’ leading rusher was junior Justin Bremmer, who had 81 yards.

Walsh is now in position to avenge its Week 1, double-overtime loss to No. 1-seeded Benedictine.

“Do we have the rematch?” Alexander asked an assistant as he prepared to send his team to the locker room.

The assistant responded with a silent thumbs-up and a grin.

“We got Bene!” Alexander said to his team, as the Warriors exploded in cheers.